The Story Behind Far Cry 5: How Ubisoft Is Building A Believable Cult – Features 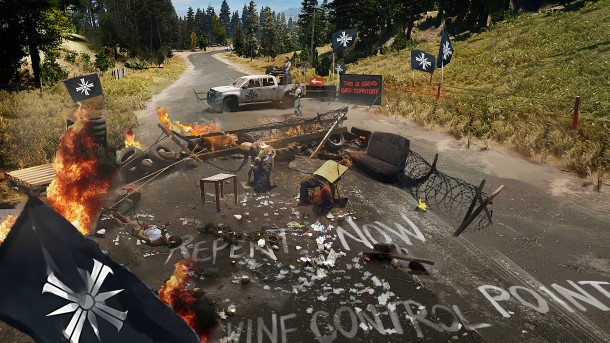 Some things seem so strange and inconceivable that we believe they could never happen to us. Bizarre news stories, fluke accidents, or extraordinary luck such as winning the lottery all seem unlikely to occur in our day-to-day lives. Far Cry 5 explores one of these unimaginable scenarios: What is it like to be wooed into a cult? What happens when that cult becomes formidably dangerous and powerful?

While most of us believe we could never fall victim to joining a cult, Ubisoft hopes to change that perspective by designing a nuanced religious sect that isn’t just believable, but also persuasive enough to help us understand how one could join willingly.

The newest Far Cry leaves behind the idyllic international locales of past entries and transports us to Montana. Players take control of a police deputy who holds an arrest warrant for cult leader Joseph Seed. This religious cult, known as Project at Eden’s Gate, believes the end of days are upon us, and is armed to the teeth for the occasion. They’re prepared to do whatever it takes to not just save themselves, but also save as many “helpless souls” as possible.

Longtime Far Cry producer and current creative director Dan Hay has wanted to explore an American setting with the series for some time. Even back when the team began making Far Cry 3, he was thinking of taking the series to the United States. But the question was, how? “I wanted to take it to the States, but we couldn’t really think of a believable way to do it,” he says. The idea was shelved, and the team moved on to extravagant settings like the Himalayas and the Stone Age instead.

As time went on, the idea still festered in the back of Hay’s head. How could he possibly set a series like Far Cry, which is known for exploring unfamiliar places, in America? Only after he settled on the idea of cults did it seem truly possible.

Hay explains that the subject comes from his feeling of uneasiness about the world, which had been stewing inside him since he was young. “It was more of a feeling than an idea,” he says. He felt a “crushing weight” during his upbringing since the Cold War seemed like a constant threat. As he grew up, he developed a distrust towards the government and saw other boomers who were brought up during the post-WWII era feeling the same. He had this relentless apprehension that a dark future was on the horizon. 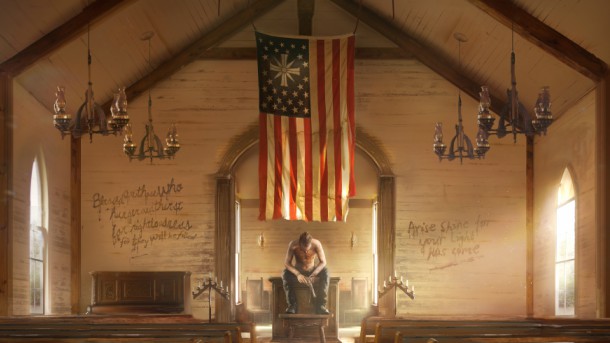 “I remember really having that feeling during the subprime mortgage collapse when I was living in the States,” he says. “I looked at people who had been brought up in the post-WWII, who were boomers and whatnot, who expected that life was going to go on a certain track and then realizing that, or at least waking up to the realization that no, it may not.”

Three years ago, when Hay was walking in downtown Toronto, he saw a man wearing a sandwich board that said something along the lines of, “the world will end.” While Hay never used to pay attention to these kooky messages, this time a feeling of dread rose up inside him. Hays couldn’t help but think, “he’s right.”

From this moment onward, Far Cry 5’s cultist themes became a reality. The team contracted Rick Alan Ross, a cult specialist who is the founder of the nonprofit Cult Education Institute and author of the book Cults Inside Out . Ross has been involved in over 500 cult interventions and has given talks at universities across the country, so Ubisoft felt he would be a perfect fit to advise the team on how to build a realistic cult. Rather than portraying hooded figures in robes or presenting arbitrary concepts, Ubisoft did its homework to understand the ins and outs of these complex religious organizations.

“What we learned about it is that it’s an organization,” Hay says. “People have jobs in the organization. It’s a process, it’s a project – there are excel spreadsheets. People have things that they do to be able to make this process work.”

Often, cults gain power in rural areas by buying up properties and achieving both social and economic growth in the community. Some cults become so powerful that even authority figures, such as local police, feel helpless. In Far Cry 5, Project at Eden’s Gate has Hope County under siege, and a hesitant intervention from the authorities has led to conflict.

Ross believes that Far Cry 5 provides something unique: it allows you to personally get to know a cult that’s on the verge of imploding. “What Far Cry 5 does is it gives you the ability to go into a destructive cult,” he says. “It allows you to interact with members, to interact with the leadership, to really get a feel for the persuasiveness, the charisma for the leader, in a way that we could only superficially understand from just reading news stories.”

One of the most notable factors of cults is their ability to coerce and persuade members to join. To make this believable in Far Cry 5, Ubisoft put a lot of effort in its casting process to find the right actor to portray cult leader Joseph Seed. They needed someone who comes across charming, but with a sense of underlying malice. Most of all, this actor needed to convince players that they too could end up in the clutches of a cult.

The team settled on Greg Bryk, an actor who appeared in the film History of Violence , very quickly after watching his video performance. “He does this eerie thing where he doesn’t blink,” Hay says. “We all watched the performance and within three minutes we were all like, ‘you know what? I might follow that guy. He’s super charming.’ But there also was this underlying comfort with violence in the way he presents himself. There was charm, there was magnetism, and there was malevolence.”

The Far Cry series has long been known for its maniacal antagonists. While there is a certain uneasiness to Seed and the rest of the cult, Ubisoft wants to make the reasons for his actions believable. Seed, who heard a voice in his head telling him the world would end, formed Project at Eden’s Gate in preparation for the apocalypse. Although it still sounds bizarre, Hay hopes that we can at least understand where Seed is coming from, and maybe even question whether he knows something we don’t.

“We’d made characters that were just pretty much crazy,” Hay says. “And they were crazy for the sake of being crazy. This time, what we wanted to be able to do, was view this person with this concept of faith, with this idea that they’re right.”

These themes are ambitious, even controversial to some, but they could also make for a compelling universe to explore. We’ll find out for sure when Far Cry 5 releases for PlayStation 4, Xbox One, and PC on February 27.