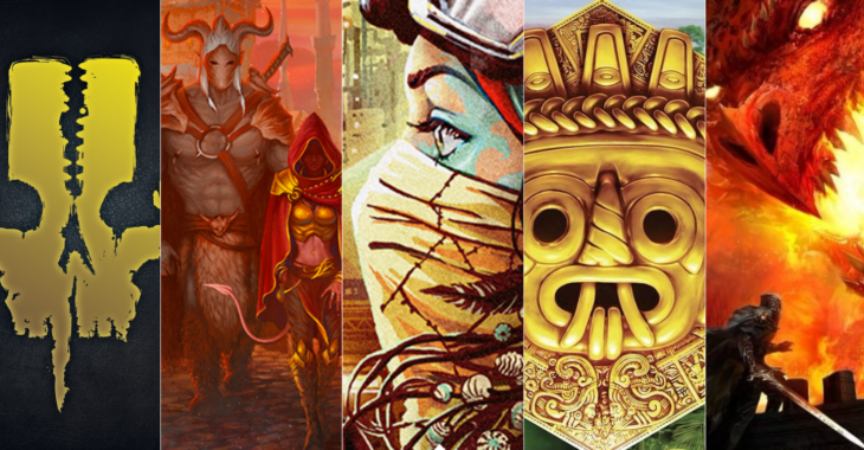 2017 was a great year for tabletop games, and we spent a lot of time playing them. As usual, the board game release schedule is slanted heavily toward the latter months of the year, so we couldn’t get absolutely everything we wanted to play to the table. This is doubly true for Eurogames, as the Spiel show in Essen, Germany, came even later in October than usual this year.

That said, we love the list we came up with. Here, in no particular order, are our favorite games of the year. Be sure to let us know your favorites in the comments, and here’s to another great year of cardboard, cubes, cards, and miniatures in 2018.

Note: Ars Technica may earn compensation for sales from links on this post through affiliate programs.

Arguably the biggest board game of the year, Gloomhaven rode a massive wave of hype to surf to the top of both the strategic and thematic “top games” list on Board Game Geek. Gloomhaven finally made its way to Kickstarter backers earlier this year, and the response was so overwhelmingly positive that a second round of crowdfunding secured almost $4 million for its second printing.

But is it good? God, yes. Gloomhaven blows fresh air into the frankly stale campaign co-op dungeon-crawler genre by eschewing dice and instead letting players plan out their movement and attacks through ingenious cardplay. Eurogame-y strategic mechanics combine with sword and sorcery to make that holiest of holy games—a deep strategy title with an absorbing, immersive atmosphere. Legacy elements change the game as you play, and there is so much content crammed into its (gigantic) core box that it feels like a game that has seen years of expansions. A crowning achievement. Read our review here .

Azul will have to be in contention for next year’s Spiel des Jahres gaming awards in Germany. The game defines “elegance” with its minimal ruleset, gorgeous presentation, and speedy turns. It also turns out to be amazing fun—Azul is my most-played new game of 2017.

Based on Islamic-inspired Portuguese tiles called azulejos, this pure abstract involves collecting sets of similar tiles and slotting them into rows on your personal game board. When a row is completely filled, one of its tiles is moved over into the square pattern to the right, garnering bonuses depending on placement and for completing rows and columns. Turns are quick, and each set of tiles you grab creates both problems and opportunities for other players. Get tired of the base game and an advanced variant exists on the back side of the player boards. Michael Kiesling, creator of the criminally overlooked Sanssouci (among many other well-regarded designs), looks to have another hit on his hands.

We first saw Spirit Island at this year’s Gen Con, but, due to the game’s limited availability, we were only recently able to get ahold of a copy. After a handful of sessions, I can report that I am head over heels for this game.

Spirit Island is like a co-op reverse-Catan that plays like a weird and wonderful mashup of Pandemic and Magic . Instead of playing as settlers building out villages and roads on a new island—a theme well-trod in board games—you take on the role of the elemental spirits charged with protecting the island’s various landscapes from those pesky invaders, who are controlled by the game itself. The island’s natives are there to help you fight back when they can, but it’s mostly up to you and your teammates to destroy the settlers’ nascent cities, remove the blight they introduce as they ravage your pristine lands, and gain more and better powers to help you on your way.

Gameplay is driven by cards, and as the game progresses, you’ll get more and better powers and instill more and more fear into the invaders’ hearts. Drive them off to win. In addition to its great theme, the game brings a ton of strategic depth. Whereas most co-op games tend to sit in the light-to-medium strategy level, Spirit Island is a meaty, heavy Euro. The game’s eight spirits play wildly differently from each other, so replayability is very high. Look for our review soon.

The sequel to the semi-official best board game of all time might not quite live up to the utter platonic perfection of its illustrious ancestor, but it’s still a heck of a game. In short, you and three chums will work together to try to rekindle the embers of humanity 71 years after a torrent of deadly diseases swept the globe, in a familiar-but-different reimagination of the classic Pandemic ruleset. The legacy format should by now be familiar to most people, but it’s what makes Season 2 so compelling: each round your group plays counts toward the story, so every loss or stroke of bad luck brings the planet closer to its plague-riddled end, while every victory snatched from the jaws of defeat unlocks another unexpected little bonus.

In all, you play 12 to 24 games representing the course of a year, with the board and your characters changing each time as you unlock stickers to represent growing or falling populations, new skills, or scars picked up in the line of duty. This time around, you start with a tiny playing area: the known world is the East Coast of the Americas and the west of Europe and Africa, plus the three mid-Atlantic safe havens from which players distribute dwindling stocks of supplies to keep the sickness at bay. As you go along and explore more of the world, you expand the play area and your horizons by literally sticking bits of the world to the board. Without giving the plot away, there is true pleasure in all the ways the designers let you unlock more goodies. Read our review here .

Constructing real stained-glass windows may or may not sound like a good time, but it’s pure pleasure in the world of Sagrada . In this dice-drafting game, players take turns picking dice from a pool available each round, then slotting those dice into the “window” they’re constructing on a personal player board. The boards themselves dictate where certain dice can go—only red dice here, only 2s there—while the game has its own global placement rules.

The trick is combining these placement restrictions with the dice on offer in any given round to maximize points based on the four different scoring cards that shape each game (three of these cards are public, while the fourth is private to each player). Because this can be difficult, the game also offers “tools” that can alter some of the rules—for a fee. Sagrada plays quickly, looks gorgeous on the table, and is a satisfyingly thinky experience with low rules overhead. Highly recommended for gamers who like solving gorgeous puzzles.