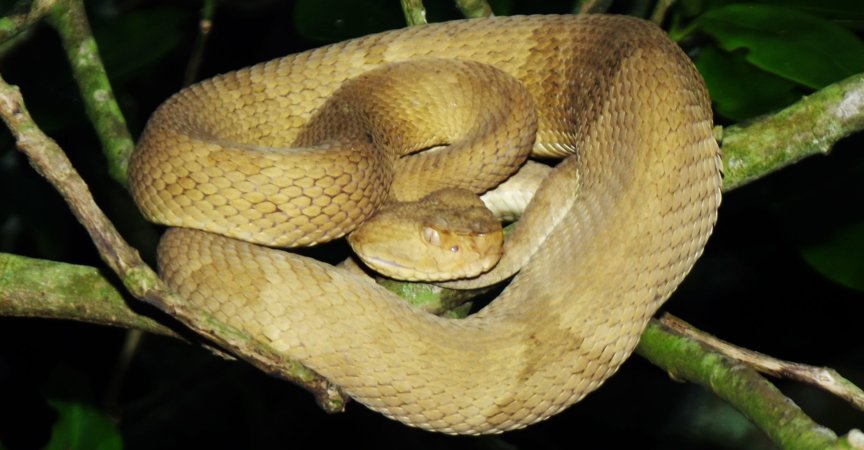 
These Conservationists Are Desperate to Defrost Snake Sperm

It’s hard to pick which species to save in Brazil right now. Yellow fever is tearing through primate populations, wiping out squirrel and howler monkeys. Poachers are nabbing giant anteaters for meat and blue macaws to sell as exotic pets. But conservation biologist Rogério Zacariotti wants to save a venomous yellow viper—the golden lancehead.

But the snake isn’t making it easy for him. Zacariotti wants to preserve the lancehead by using artificial insemination—which, in his case, involves catching a live, venomous snake, restraining it in a plastic tube, massaging the sperm toward its exit, and using a needle to remove it for future implantation. It’s been a successful assisted reproductive technique for endangered animals and, of course, humans: The first human pregnancy via frozen semen was in 1953. But more than 60 years later, scientists still haven’t succeeded with the snake version.

Scientists have been able to successfully create snakelets by inserting fresh sperm into a female snake since 1970. But there has to be a quick turnaround between the removal of the ejaculate and the insemination—which doesn’t leave much time to, say, ship the sperm to a partner that it definitely isn’t related to. Brother, sister, or cousin pairs can lead to heritable diseases and other problems with genetic diversity. So conservationists have to freeze sperm to transport it. And no snake has ever given birth to offspring from defrosted sperm.

Which is where Zacariotti comes in. As a graduate student, he moved to California to collaborate with Barbara Durrant, who studies reproduction at the San Diego Zoo. When Durrant and Zacariotti first checked the scientific literature on how to freeze snake semen, they found just about nothing. See, it’s relatively easy to freeze and store mammal sperm, including the human stuff. Not so with snake sperm. Its tails are long and pointed at the end , which makes it more vulnerable to damage from ice crystals.

So Durrant and Zacariotti got to work gathering roadside rattlesnakes. Since both rattlers and golden lanceheads are in the viper family, the team hoped they would have similar sperm. Using the aforementioned ventral massage, they extracted samples from the live snakes. And then they tried to freeze it, starting with borrowed techniques from bird sperm cryopreservation. Bird and snake sperm, you see, have a similar shape, which meant the chemical mediums for freezing one might work on the other.

But the sample sizes were so small that they could only test a few chemicals on each sample. There was too much variability to nail down a standard, successful protocol for sperm freezing. Zacariotti, Durrant, and two other scientists published their research in 2011 with the title “117 Cryopreservation of Snake Semen: Are We Frozen In Time?”

Yet their work wasn’t done. There are more than 200 species of endangered snakes around the world, and herpetologists expect to add to that number as they discover new species (snakes hide well, so they’re hard to find and study). So after Zacariotti finished his graduate work and returned to Brazil, Durrant decided to turn her attention to pythons.

Pythons solved one of the problems with the viper study: volume. The snakes are everywhere. Florida is overrun with Burmese pythons that irresponsible pet owners have released into the everglades, and scientists and civilians alike capture the snakes for study and sport. So Durrant reached out to Mike Rochford , an invasive species coordinator at Fort Lauderdale, to see if he had any extra python sperm he was willing to send over. Turns out, he did. He mailed Durrant entire vas deferentia, the ducts that hold the sperm, from dead snakes. The bigger samples gave Durrant the computational power she needed to finally find the a combination of cryoprotectants that doesn’t kill the sperm.

Durrant couldn’t just stick the once-frozen sperm into a fertile snake to see what led to snakelets. She needed a quicker and more precise measure of viability, so she broke the sperm’s health down into three parts: initial motility score (how fast the guys were swimming), plasma membrane integrity (how solid they were), and acrosomal integrity (how good the head of the sperm in particular was looking). A mixture of 4 percent dimethyl sulfoxide and 6 percent glycerol or 4 percent of both chemicals best preserved the sperm. She published an abstract in December 2017 and hopes to publish a full paper describing her techniques later this year.

“This study represents the first comparative, comprehensive attempt to develop a sperm cryopreservation protocol for any snake species,” Durrant writes in her abstract. She says that the project still needs a lot of work, but she wants to make sure other groups don’t face the same dearth of information that she did. “What they’ve done is a very first step in research—it’s just the very beginning,” says Terrence Tiersch , professor at the Louisiana State University school of natural resources and aquatic cryopreservation researcher. “It’s looking like we can freeze the sperm and it won’t be completely killed in the process. Therefore, it’s worth continuing to study.”

In the field of herpetology, that’s not always a given. Durrant, Zacariotti, and their colleagues are used to defending their less-than-charismatic subjects to the general public, as well as grant committees. Snakes can be medicinally useful, Zacariotti argues, pointing to certain high blood pressure medications made from their venom. And “in Brazil, they are working on an analgesic from the rattlesnake protein that is stronger than morphine and is not addictive,” he says. Durrant says she hopes to apply the techniques they learn in the lab to other species of snakes and reptiles.

But they also have personal motivations. “My goal is to make sure my children see the golden lancehead,” says Zacariotti. He is still working on snake conservation, though he has diversified the species he studies in order to increase the chances he will get funding from the Brazilian government’s dwindling research fund . And he still nurtures a colony of about 75 golden lanceheads. Not only does keeping the snakes alive and reproducing take effort—if he wants to have hope of returning them to the wild, they need to be able to hunt native lizards, which aren’t in a great place themselves, numbers-wise. Keeping entire ecosystems alive in a lab is no easy task.

Reproduction Is Wild in the Anthropocene