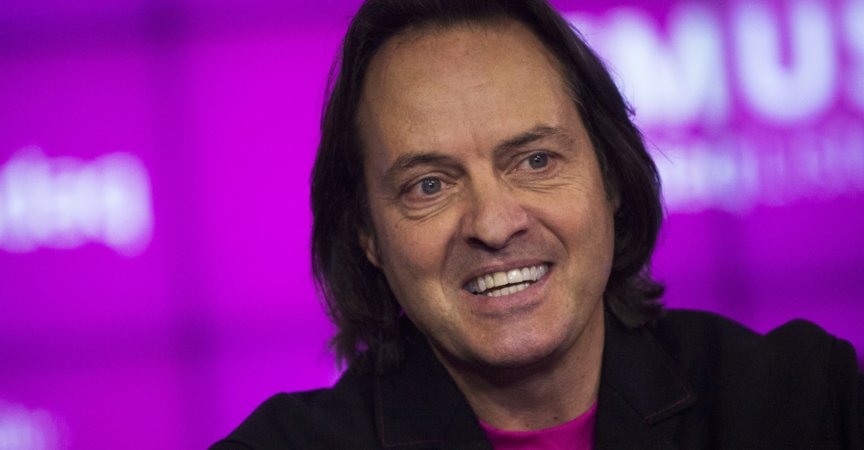 Sprint may soon be no more. Today the venerable telecommunications company announced plans to merge with T-Mobile in an all-stock deal. If regulators give the go-ahead, the new company will be called simply T-Mobile, and T-Mobile’s current chief executive officer John Legere will be its CEO.

That’s a big if . Although the Trump administration is generally seen as more friendly to the telco industry than the Obama administration was, it has taken issue against some mega-mergers, most notably AT&T’s bid for Time Warner. The combination of T-Mobile and Sprint, the third and fourth largest mobile providers respectively, would bring the number of major cellular carriers down from four to three, which could attract a lot of scrutiny.

The two companies will exchange stock at a rate of 0.10256 T-Mobile shares per Sprint share and 9.75 Sprint per T-Mobile share, valuing the combined company at $146 billion.

T-Mobile owner Deutsche Telekom will own 42 percent of the new company, and the Japanese conglomerate SoftBank, which acquired Sprint in 2013, will own 27 percent. The remaining 31 percent will be held by the public. SoftBank CEO Masayoshi Son and Sprint CEO Marcelo Claure will serve on the board of the new company.

The new outfit will be headquartered in T-Mobile’s home of Bellevue, Washington with a second headquarters in Sprint’s home of Overland Park, Kansas. How and whether the new company will use the Sprint brand will be decided after the deal closes.

The merger is a long time coming. AT&T tried to buy T-Mobile in 2011, but scuttled the deal when it became clear that regulators wouldn’t approve it. T-Mobile then tried to sell to Sprint, but the merger was called off in 2014 when it became apparent regulators would block that deal as well. Another round of negotiations between T-Mobile and Sprint followed the 2016 election and the appointment of the more telco-friendly Federal Communications Commissions chair Ajit Pai. But the two companies couldn’t reach an agreement and called off the talks last November.

What the Merger Means

In an announcement, T-Mobile and Sprint claimed the combined company would create lower prices in part by achieving economies of scale. It also claims the merged company would employ more people than the two businesses employed previously, creating thousands of jobs to support a $40 billion investment into the transition to 5G, the next generation of mobile wireless technology .

“The new company will be able to light up a broad and deep 5G network faster than either company could separately,” the announcement says.

Critics of the deal say it will result in less competition and higher prices. Since AT&T dropped its bid for T-Mobile, the company has greatly simplified its pricing, dumped annual contracts, and passed Sprint to become the third largest carrier. T-Mobile’s consumer friendly practices led the way for other carriers to likewise stop forcing consumers into long-term contracts and to resurrect unlimited data plans (T-Mobile has simplified its pricing, disposed of annual contracts, and routinely gives its customers free pizzas and movies).

Critics of the deal say it will result in less competition and higher prices. But its defenders argue that a combined T-Mobile and Sprint could put even more pressure on AT&T and Verizon.

“Both [T-Mobile and Sprint] have been feisty competitors to the two biggest national mobile wireless carriers, Verizon and AT&T, introducing consumer friendly pricing and data plans that have pushed the big two to lower their prices and expand their data offerings,” former FCC lawyer Gigi Sohn said in a statement. “This combination will not only result in less choice for consumers, it will provide greater incentive for the three remaining companies to act in concert.”

Defenders of the deal, however, argue that a combined T-Mobile and Sprint could put even more pressure on AT&T and Verizon. “While I’m not prepared to take a bottom-line position on whether this merger ultimately should be approved or not, I certainly don’t agree there should be any iron-clad rule, like the one Obama administration FCC Chairman Tom Wheeler articulated, against going from four to three nationwide mobile providers,” Randolph May, founder of the free market think tank Free State Foundation, said in a statement. “That is the wrong way to analyze the market.”

The Trump administration, and the FCC in particular, has a generally more laissez-faire attitude towards both the telco industry and mergers. But the administration also has a populist streak that could foil, or at least slow down, this merger. It has also blocked foreign companies from acquiring US companies out of national security concerns. Most notably, President Trump blocked Singapore-based chipmaker Broadcom’s acquisition of Qualcomm earlier this year, out of fears that a consolidated chip market would give China’s ambitions in the industry an edge. T-Mobile and Sprint are both already foreign-owned, which might reduce concerns. Then again, the Trump administration is anything but predictable.