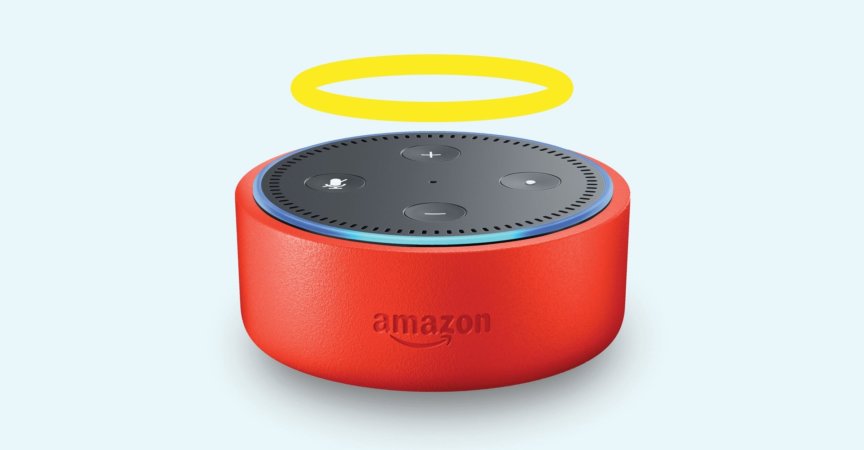 Among the more modern anxieties of parents today is how virtual assistants will train their children to act. The fear is that kids who habitually order Amazon’s Alexa to read them a story or command Google’s Assistant to tell them a joke are learning to communicate not as polite, considerate citizens, but as demanding little twerps.

This worry has become so widespread that Amazon and Google both announced this week that their voice assistants can now encourage kids to punctuate their requests with “please.” The version of Alexa that inhabits the new Echo Dot Kids Edition will thank children for “asking so nicely.” Google Assistant’s forthcoming Pretty Please feature will remind kids to “say the magic word” before complying with their wishes.

But many psychologists think kids being polite to virtual assistants is less of an issue than parents think—and may even be a red herring. As virtual assistants become increasingly capable, conversational, and prevalent (assistant-embodied devices are forecasted to outnumber humans), psychologists and ethicists are asking deeper, more subtle questions than will Alexa make my kid bossy . And they want parents to do the same.

“When I built my first virtual child, I got a lot of pushback and flak,” recalls developmental psychologist Justine Cassell , director emeritus of Carnegie Mellon’s Human-Computer Interaction Institute and an expert in the development of AI interfaces for children. It was the early aughts, and Cassell, then at MIT, was studying whether a life-sized, animated kid named Sam could help flesh-and-blood children hone their cognitive, social, and behavioral skills. “Critics worried that the kids would lose track of what was real and what was pretend,” Cassel says. “That they’d no longer be able to tell the difference between virtual children and actual ones.”

But when you asked the kids whether Sam was a real child, they’d roll their eyes. Of course Sam isn’t real, they’d say. There was zero ambiguity.

Nobody knows for sure, and Cassel emphasizes that the question deserves study, but she suspects today’s children will grow up similarly attuned to the virtual nature of our device-dwelling digital sidekicks—and, by extension, the context in which they do or do not need to be polite. Kids excel, she says, at dividing the world into categories. As long as they continue to separate humans from machines, she says, there’s no need to worry. “Because isn’t that actually what we want children to learn—not that everything that has a voice should be thanked, but that people have feelings?”

Point taken. But what about Duplex , I ask, Google’s new human-sounding, phone calling AI? Well, Cassell says, that complicates matters. When you can’t tell if a voice belongs to a human or a machine, she says, perhaps it’s best to assume you’re talking to a person, to avoid hurting a human’s feelings. But the real issue there isn’t politeness, it’s disclosure; artificial intelligences should be designed to identify themselves as such.

What’s more, the implications of a kid interacting with an AI extend far deeper than whether she recognizes it as non-human. “Of course parents worry about these devices reinforcing negative behaviors, whether it’s being sassy or teasing a virtual assistant,” says Jenny Radesky, a developmental behavioral pediatrician at the University of Michigan and co-author of the latest guidelines for media use from the American Academy of Pediatrics. “But I think there are bigger questions surrounding things like kids’ cognitive development—the way they consume information and build knowledge.”

Consider, for example, that the way kids interact with virtual assistants may not actual help them learn. This advertisement for the Echo Dot Kids Edition ends with a girl asking her smart speaker the distance to the Andromeda Galaxy. As the camera zooms out, we hear Alexa rattle off the answer: “The Andromeda Galaxy is 14 quintillion, 931 quadrillion, 389 trillion, 517 billion, 400 million miles away”:

To parents it might register as a neat feature. Alexa knows answers to questions that you don’t! But most kids don’t learn by simply receiving information. “Learning happens happens when a child is challenged,” Cassell says, “by a parent, by another child, a teacher—and they can argue back and forth.”

Virtual assistants can’t do that yet, which highlights the importance of parents using smart devices with their kids. At least for the time being. Our digital butlers could be capable of brain-building banter sooner than you think.

This week, Google announced its smart speakers will remain activated several seconds after you issue a command, allowing you to engage in continuous conversation without repeating “Hey, Google,” or “OK, Google.” For now, the feature will allow your virtual assistant to keep track of contextually dependent follow-up questions. (If you ask what movies George Clooney has starred in and then ask how tall he his, Google Assistant will recognize that “he” is in reference to George Clooney.) It’s a far cry from a dialectic exchange, but it charts a clear path toward more conversational forms of inquiry and learning.

And, perhaps, something even more. “I think it’s reasonable to ask if parenting will become a skill that, like Go or chess, is better performed by a machine,” says John Havens, executive director of the the IEEE Global Initiative on Ethics of Autonomous and Intelligent Systems. “What do we do if a kid starts saying: Look, I appreciate the parents in my house, because they put me on the map, biologically. But dad tells a lot of lame dad jokes. And mom is kind of a helicopter parent. And I really prefer the knowledge, wisdom, and insight given to me by my devices. “

Havens jokes that he sounds paranoid, because he’s speculating about what-if scenarios from the future. But what about the more near-term? If you start handing duties over to the machine, how do you take them back the day your kid decides Alexa is a higher authority than you are on, say, trigonometry?

Other experts I spoke with agreed it’s not too early for parents to begin thinking deeply about the long-term implications of raising kids in the company of virtual assistants. “I think these tools can be awesome, and provide quick fixes to situations that involve answering questions and telling stories that parents might not always have time for,” Radesky says. “But I also want parents to consider how that might come to displace some of the experiences they enjoy sharing with kids.”

Other things Radesky, Cassell, and Havens think parents should consider? The extent to which kids understand privacy issues related to internet-connected toys. How their children interact with devices at their friends’ houses. And what information other family’s devices should be permitted to collect about their kids. In other words: How do children conceptualize the algorithms that serve up facts and entertainment; learn about them; and potentially profit from them?

“The fact is, very few of us sit down and talk with our kids about the social constructs surrounding robots and virtual assistants,” Radesky says.

Perhaps that—more than whether their children says “please” and “thank you” to the smart speaker in the living room—is what parents should be thinking about.

Coming of Age in the Digital Age: