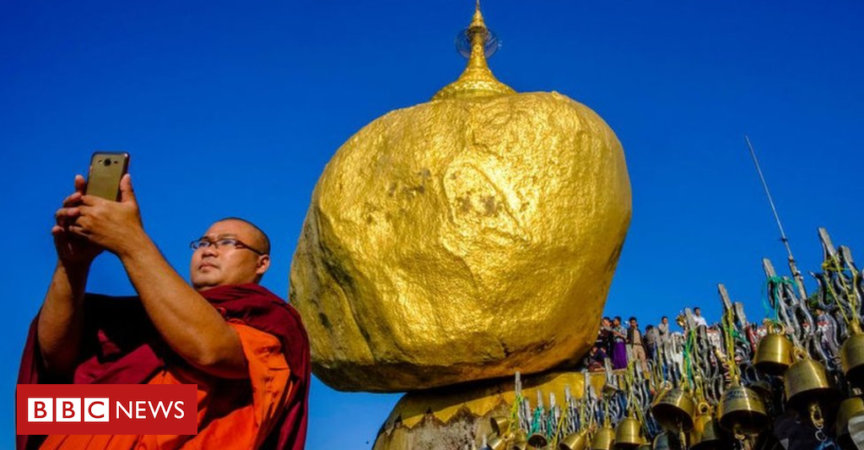 After decades of dictatorship and international sanctions, Myanmar (formerly called Burma) is now home to a small but fast-growing tech start-up scene, offering everything from home-cooked food deliveries to comic apps. But the country is still considered too risky by many big international investors.

Dressed in a traditional Burmese longhi and a conical hat offering much-needed shade from the blistering sun, a farmer planting rice seedlings in a paddy field in the Shan state stops work briefly to flip out his phone and check Facebook.

Just five years ago, when mobile phone SIM cards cost up to $500 (£380), this scene would have been unthinkable.

But since international telecoms companies opened networks in Myanmar, SIM card prices have come crashing down to around a dollar, and four out of five citizens now have a smartphone – catapulting the country’s digital economy into the 21st Century.

In the country’s former capital, the sense of change is apparent.

Housed in an block of flats in downtown Yangon is Phandeeyar, the country’s first-ever community tech hub hosting hackathons and workshops. It provides desk space for start-ups on Myanmar’s first-ever accelerator programme.

Benefiting from $25,000 worth of seed funding and mentoring from Phandeeyar, seven young start-ups are busy working on their fledgling businesses.

Many like Shwe Bite, a marketplace which delivers home-cooked food to offices, are challenging business norms in this most traditional of countries.

“I decided to set up Shwe Bite because of my personal experience as an office worker away from home,” explains co-founder Moe Htet Kyaw.

“Most, like me, don’t have the time or enough skills to cook. On the other hand, in Myanmar, women – especially housewives – are seeking sustainable income for family expenses.”

Shwe Bite connects these home cooks with busy workers. It’s not as quick as meal delivery services like Deliveroo – customers have to pre-order before 4pm the day before – but the company has lofty ambitions.

“It’s only available in Yangon but we plan to expand to other cities and maybe other countries – there are a lot of Burmese people living in counties like Singapore,” says Moe Htet Kyaw.

One of Myanmar’s most successful start-ups is White Merak Comic Studios, a comic app, which received $140,000 in funding from three local angel investors in 2017 and now employs 20 people.

A big fan of comics growing up, co-founder and chief executive Aung Ye Kyaw launched the app in 2016 after discovering that many small, dedicated comic book stores had been forced to close during the years of military dictatorship.

“I wanted to resurrect [the comics industry] ,” he says. “One of the main reasons why it had experienced a downfall is because people wanted newly-created content, not old republished comics.

“With the previous government there was a lot of censorship, so artists couldn’t innovate or be creative.”

White Merak currently has 1,000 subscribers paying 1,000 kyats (54p) per month for content, while around 3,000 people have so far bought single episodes.

Jes Kaliebe Petersen, the Danish chief executive of Phandeeyar, says the first wave of smartphone-enabled tech start-ups in Myanmar were “focused on the urban middle-classes services” – such as jobs databases for professionals and property websites.

This new wave is “targeting a new generation of digital consumer in Myanmar who doesn’t necessarily live in Yangon or Mandalay or have a high disposable income but already has a smartphone”.

“No matter how rich or poor, most parents get tutors for kids,” says Mr Petersen. “The market for this is huge but very fragmented. Now there’s a platform that is open for everyone to rate and book tutors.”

One of the major challenges facing start-ups in Myanmar is taking payments.

“There’s no major payment system that people can use – for example PayPal – and not a lot of people have a credit or debit card,” says White Merak’s Aung Ye Kyaw.

Instead customers pay by topping up their mobile phone SIM cards.

Another challenge is the lack of legislation protecting intellectual property.

“There’s a lot of piracy here,” says Aung Ye Kyaw. “It’s easy to copy and duplicate. There are no laws for the time being.”

A new trademark law is scheduled to come into effect this year, but White Merak has already put its own preventative measures in place – ensuring subscribers can’t take screenshots of the comics on their phones, for example.

Lack of investment is also a well-discussed issue.

One or two start-ups have been able to raise significant capital. The employment site JobNet has received two seven-figure US dollar funding rounds, while software developer My Play was bought by Australian firm iSentric in 2017.

But overall there’s been little interest from investors wanting to risk significant sums in a politically fragile country facing international opprobrium for its treatment of the Rohingya people.

“Investors are reluctant to invest under these political conditions,” says Shwe Yamin Oo, chief executive of RecyGlo, a start-up that organises a recyclables pick-up service for offices in Yangon.

“[They] want to make sure that they get their money back. But Myanmar is high return, high risk.”

Despite all the challenges, Phandeeyar’s Mr Petersen is optimistic.

“As Myanmar’s economy grows and its middle class grows, it has all the factors in place to create a successful and thriving ecosystem,” he believes.

“There’s a really good number of people building the next generation of companies.”