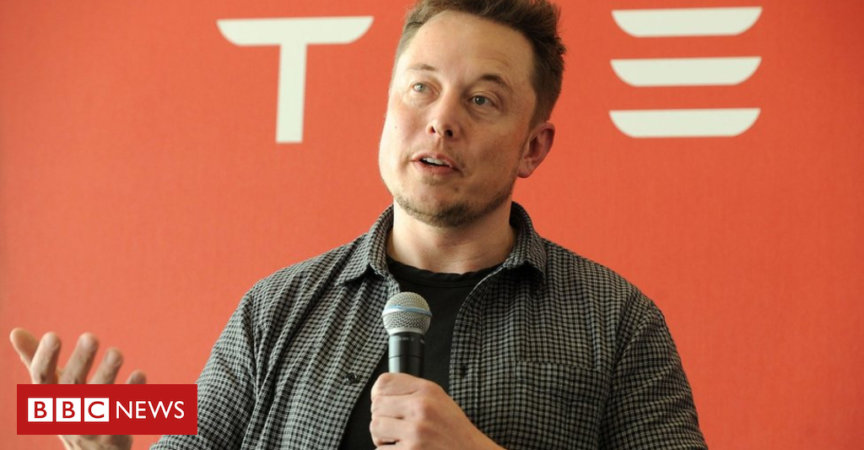 In the interview, Mr Musk also said he was not “on weed” when he controversially tweeted about taking the company private.

After the comments from Mr Musk, shares were down 8.8%.

The share drop was encouraged by a UBS note predicting Tesla’s Model 3 will lose $6,000 per vehicle, as costs soar.

The ramping up of production of the electric car company’s mass-market Model 3 was one of the reasons why Mr Musk admitted to being overworked and using the sedative Ambien to help sleep, he said in the interview.

The New York Times interview also discussed his 7 August tweet when the CEO said he wanted to take Tesla private at $420 a share.

“But I was not on weed, to be clear,” he said, as he also confirmed the tweet was not reviewed by anyone at the electric car company.

4/20 is an infamous term, more common in the US, that refers to the consumption of cannabis.

The price of $419 would have represented a 20% premium over Tesla’s share price at the time.

“Weed is not helpful for productivity. There’s a reason for the word ‘stoned’. You just sit there like a stone on weed,” Mr Musk, 47, said.

‘No sleep, or Ambien’

He also told the paper that friends had expressed concern that he was exhausted after working 120 hour weeks.

“This past year has been the most difficult and painful year of my career,” he said. “It was excruciating.”

The paper reported that at times during the interview he stopped speaking, seemingly overcome by emotion – and that he spent the full 24 hours of his birthday on 28 June working.

“All night – no friends, nothing,” Mr Musk said.

Mr Musk also said that he took the sedative Ambien to help him sleep when he was not working: “It is often a choice of no sleep, or Ambien.”

According to the paper, his use of the drug has concerned some board members, who wonder if it affects his late-night tweets.

In May Roseanne Barr blamed Ambien for her tweet that likened Valerie Jarrett, an African-American former aide to Barack Obama, to an ape.

His tweet about taking Tesla private sparked a sharp rally in Tesla’s share price, but has also prompted scrutiny.

London hedge fund manager Crispin Odey, who is shorting Tesla stock, has joined a number of analysts disproving of Mr Musk’s running of the company.

According to Bloomberg, Mr Odey told investors: “Tesla feels like it is entering the final stage of its life.”

Fox News has reported that the US Securities and Exchange Commission (SEC) had sent subpoenas to the electric carmaker and was “ramping up” its investigation into the tweet.

‘They can have the job’

Tesla’s directors said: “There have been many false and irresponsible rumours in the press about the discussions of the Tesla board.

“We would like to make clear that Elon’s commitment and dedication to Tesla is obvious.

“Over the past 15 years, Elon’s leadership of the Tesla team has caused Tesla to grow from a small start-up to having hundreds of thousands of cars on the road that customers love, employing tens of thousands of people around the world, and creating significant shareholder value in the process.”

The statement was issued by the board members, excluding Mr Musk, who controls about a fifth of Tesla shares.

The board has set up a committee to evaluate any take-private proposal from Mr Musk, who has said that he discussed funding a deal with the Saudi Arabian sovereign wealth fund.

The New York Times reported that Mr Musk did not intend to separate the roles of chairman and chief executive, but that a search was underway to recruit a deputy.

However, he said there was “no active search” underway. He added: “If you have anyone who can do a better job, please let me know. They can have the job.

“Is there someone who can do the job better? They can have the reins right now.”