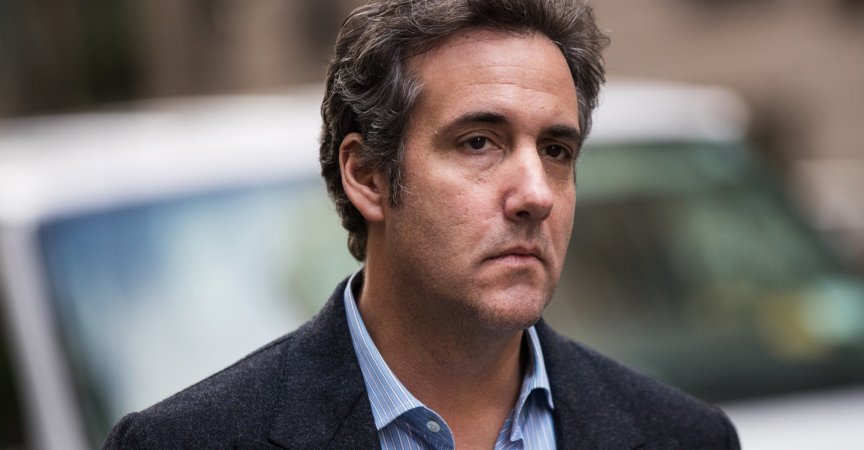 If it’s summer, California must be on fire. And if that’s not enough dystopia for you, there’s always the fact that DNA-testing service 23AndMe is selling clients’ information to drug manufacturers, or the emergence of mutated HIV strains that cause illness quicker than others, not to mention the president apparently threatening war with Iran for no immediately discernible reason. Yes, the world keeps on turning towards the very worst incarnation of itself, it seems, but it’s not all bad; at least there’s a new Mission: Impossible out this weekend. And until you can get yourself to a fine purveyor of popcorn-fueled escapism, please do enjoy this primer on what the internet has been discussing over the past seven days or so.

What Happened: Cohen, a man who had previously announced that he would take a bullet for Donald Trump, has apparently reconsidered his position.

What Really Happened: Remember when people were wondering if Trump’s personal attorney being undercriminalinvestigation meant he mightturnonTrump ? As it turns out, the answer is definitely yes.

How willing, exactly? This week provided a clue, when Cohen releasedoneofthetapestoCNN .

The recording—one of many, apparently—wasabigdeal on a couple of fronts. First off, it apparently confirms that Trump knew about Cohen’s secret payments, which raises questions about whether he’s complicit in campaign finance violations. And then there’s the mention in the tape that Trump Organization CFO Allen Weisselberg knew more than people had suspected, which could open up an entirely different front on investigations into Trump’s business. (Since the tape’s release, it has since emerged that Weisselberg has been subpoenaed to testify by federal investigators, deepening the idea that this tape could potentially be a game changer.) Not that any of that was enough to convince everyone of the tape’s importance:

Still, it’s not as if Cohen had any other beans to spill, right? …Right?

The Takeaway: Tantalizingly enough, this seems to be only the beginning of the revelations.

We Have Always Been at War With the Fake News Media

What Happened: All those “Big Brother” jokes began to seem even less funny when President Trump appeared to adopt the language and posturing of George Orwell’s 1984 during a speech this week.

What Really Happened: Traditionally, presidents don’t engage in politics while speaking at events for veterans. Then again, the sitting president is a walking “don’t.”

Well, the National Convention for the Veterans of Foreign Wars sounds entirely reasonable. Surely, the president couldn’t do anything utterly outrageous while there!

That last line in particular drew some comparisons to some famous literature on Twitter:

Actually, it wasn’tjustTwitterthatnoticed. Remember when, around the time of Trump’s inauguration, sales of 1984 jumped ? Let’s consider those people market leaders.

As Trump’s comments gainedalotofattention , it should be noted that the VFW was a little stunned itself.

Reports from those on the ground suggested a more complicated response than might have come across, however:

Well, at least the president got to impart some important information that wasn’t just about the media being the enemy of the people to all the veterans.

The Takeaway: You know what? Maybe we’re being too unkind, and the President was thinking on a scale the rest of us rarely consider.

What Happened: It’s unsurprising that the White House is at war with the press. Slightly more surprising, however, was the response of the press.

What Really Happened: While we’re talking about President Trump’s dislike of the media…

That’s CNN’s White House reporter Kaitlan Collins on Wednesday, making passing comment about questions she’d asked during a presidential appearance that morning that Trump had ignored entirely. It was a snarky comment, sure, but also one that accepted the reality: Reporters ask questions, and presidents get to ignore them. That’s how things work. Later that day, however, it was revealed that the White House really wasn’t a fan of those questions:

It’s perhaps worth noting that the White House’s dislike of Collins might have as much to do with the fact that, a day earlier, she had broken the story that the White House would no longer be releasing public summaries of calls between the president and other world leaders. Nonetheless, as themediastartedreportingthestory , journalists from other outlets closed ranks around Collins.

How bad did this look? Bad enough that one of the president’s closest advisors turned against him on this particular topic.

Well, if Fox was against it, surely the president would change his mind!

The Takeaway: Does the White House understand how journalism works? Actually, no; don’t answer that. Anyone who’s been paying attention already knows the answer.

Sometimes, You Can Try to Punch Too Far Up

What Happened: Turns out, not everyone wants to get into a fight with the deputy attorney general of the United States.

What Really Happened: You know what Republicans really can’t stand, it seems? Someone trying to do their job in law enforcement. We’ve had the president fire an FBI boss, and this week, Republican members of Congress decided it was time to take down the deputy attorney general.

That said, some Democratic lawmakers weren’t impressed by the effort.

Neither was a former deputy attorney general, as it turned out…

…nor the current attorney general.

Still, at least House Speaker Paul Ryan was in favor of the move. No, wait a minute…

With this kind of response, it’s no surprise that the effort stalledoutwithin 24 hours:

The Takeaway: With this move off the table, Jim Jordan—who not only co-sponsored the bill, but is also ignoring the sexual abuse scandal he’s involved in from his days at Ohio State—announced that he was running for Speaker of the House. Because of course he is . This just in: Shameless terrible people are shameless, terrible.

There Has To Be a Shadowfax Pun Here Somewhere

What Happened: President Trump really wants to get to the bottom of the latest abuse of power by the smug elite. Unfortunately, it’s not real.

What Really Happened: Hey, kids! Have you heard the news about the hot new trend?

Yes, shadow banning is back—and this time, it’s not for sex workers forced off Twitter because the platform is afraid of SESTA. Actually, I shouldn’t be that sarcastic; sex workers actually arebeingimpacted by changes in search and notifications on Twitter, and conservatives… aren’t. But it’s easy for them to believe otherwise, especially when combining their natural paranoia and a story from Vice that told them they were being shadow banned on Twitter. Sure, Vice isn’t normally one of the right wing’s preferred information sources, but things are different when they’re saying you definitely are being oppressed.

As the story began to gaintractionelsewhereinthemedia—including this very organ—something started to become clear: Twitter wasn’t shadow banning conservatives. Instead, as the original piece Vice’s story drew from made clear, the platform was apparently demoting controversial material in search, with even that being inconsistent to the point of it seeming more like a bug than a feature—something that the company admitted when pressed on the issue. Some on Twitter wondered if “shadow banning” could be a new explanation for something else.

The Takeaway: Oddly enough, while this was going on—or not going on, as the case may be—there was far less outcry about the fact that Alex Jones, the performative paranoiac behind Info Wars who threatened to shoot Robert Mueller this week, was temporarily suspended on both YouTubeandFacebook Thursday. Perhaps even conservatives are glad to see him shut up, even if it’s only for 30 days.