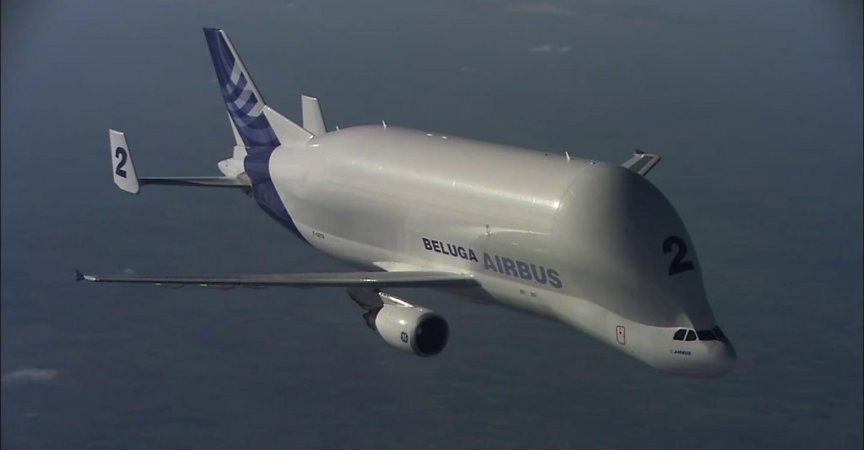 
Meet the gargantuan air freighter that looks like a whale

Passenger aircraft are built in sections around the world then assembled in various locations, so how do you transport huge parts like wings and fuselages? Meet the super-transporters – giant planes for giant jobs.

The aircraft being assembled in Hangar L34 at Airbus’s Toulouse headquarters is, to put it mildly, an unusual beast.

Where most aircraft have slim, elegant fuselages this one is swollen and bloated, ending in a vast curved dome above the cockpit.

Its wings, despite a span of more than 60m (197ft), seem remarkably short and stubby next to that enormous body.

Overall, it bears a striking resemblance to a whale – and indeed it is named after one. This is the Airbus Beluga XL, a brand new breed of super-transporter.

The company needs aircraft like this to transport major components, such as wings and sections of fuselage, from the factories where they’re built to final assembly lines in Germany, France and China.

Airbus has highly specialised production centres across Europe, a legacy of the time when it was a consortium of national aerospace businesses. To allow its supply chain to work effectively, it needs to be able to carry large cargoes from one site to another with minimal delay.

But why not simply build everything in one place to do away with the need for giant transporters?

“Airbus pioneered the system of having centres of excellence around Europe – now around the world,” says Prof Iain Gray, director of aerospace at Cranfield University.

“You’ve got skilled labour, shared investment, and the ability to draw in local expertise – the benefits of a distributed model are well proven.”

Hence the need for super-transporters.

Back in the 1970s, that job was done by variants of Super Guppy, a conversion of Boeing’s turbo-prop powered C-97 Stratofreighter – itself a development of the Second World War B-29 bomber.

It was replaced in 1995 by a first-generation Beluga, the ST, a twin-engine jet built by Airbus itself. Much bigger than the Super Guppy, it could also be loaded and unloaded far more quickly.

Airbus currently has five Beluga STs in service, flying for thousands of hours each year and often making multiple journeys each day.

But as the aerospace giant itself has grown, so have its needs.

One of the main jobs of the Beluga is to fly wings for the new A350 from Broughton in North Wales, where they are manufactured, to Airbus’s headquarters in Toulouse, where the aircraft are assembled.

“We can carry more,” says Bertrand George, head of the Beluga XL programme. “We can carry two wings at a time, rather than one. So it means for the wing leg of the operation, coming from the UK to Toulouse via Bremen, we double the productivity of the aircraft.”

Despite its remarkable appearance, the Beluga XL is not a wholly new design. In fact, the one being prepared in Hangar L34 began life as a much more conventional machine – an A330-200 freighter.

Airbus engineers removed the roof and cockpit and replaced them with a custom-built structure, to create the necessary vast cargo bay. The characteristic Beluga shape was created with the addition of a giant cargo door, allowing the aircraft to be loaded from the front.

The Beluga XL will begin test flights later this year, and is due to enter into service in 2019. There are currently two being built, and Airbus intends to make five of them. The existing Belugas will be phased out by 2025.

Despite its remarkable size, the Beluga XL will not be the largest super-transporter ploughing through the skies.

Boeing, for example, has its own big beast – the Dreamlifter, which it uses to bring major components of the 787 Dreamliner from supplier factories in Japan and Italy to its final assembly lines in Washington state and South Carolina.

If the Airbus looks like a whale, the Boeing most closely resembles a snake that has swallowed a cow.

Based on the 747-400, with an enlarged fuselage, it can actually lift a greater weight than the Beluga.

But according to David Learmount, consulting editor of the aviation research company FlightGlobal, such comparisons are not really the point.

“These aircraft are purpose-built to move specific components. There’s no point in building them larger than they need to be,” he says.

“They are each building their aeroplanes for their own purposes.”

Both the Beluga XL and the Dreamlifter are designed to maximise cargo volumes. The converted 747 has the greatest amount of space overall, but the big Beluga has a wider cross section, allowing it to carry bigger components.

In fact, in terms of their ability to carry heavy weights, both are put in the shade by military transporters with vast reserves of power – such as the six-engined Antonov An-225.

This massive machine was designed during the 1980s to transport the Soviet space shuttle. It is nearly 84m long – 20 metres longer than the XL.

It has a wingspan of 88m and can carry up to 250 tonnes – roughly five times the Airbus’s maximum. But its cargo bay is much narrower and lower.

In other words, if you want to carry a consignment of tanks, the Antonov would be ideal. But the Beluga XL has been designed for a single purpose – to carry large parts of other planes as efficiently as possible.

So while the distributed model for aircraft manufacturing remains in favour, these big beasts of the skies are likely to remain operational for many years to come.