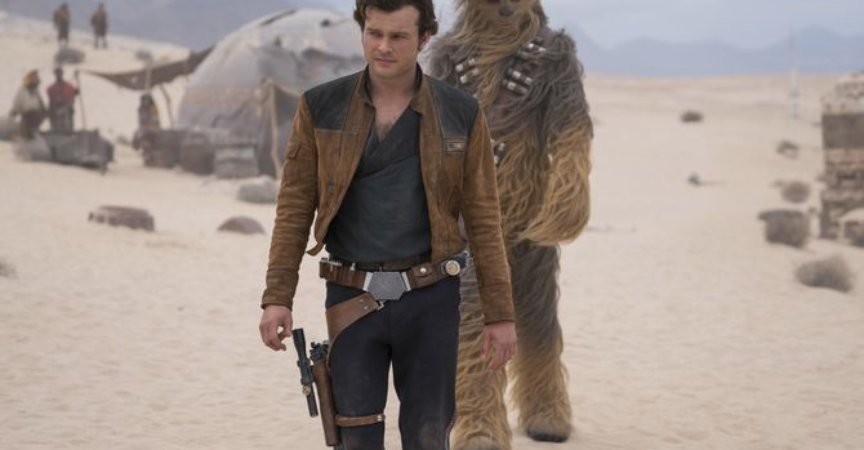 Read further and I can’t guarantee you won’t be hobbled by a fantastically good spoiler, preventing you from making the Kessel Run in less than 12 parsecs.

At the end of Solo: A Star Wars story, it’s revealed Emilia Clarke ‘s Qi’ra has been in contact with fan favorite Star Wars villain, Darth Maul, played once again by Ray Park. If you’ve only followed the Star Wars movies, your last memory of Darth Maul was seeing him fall to his apparent death after being sliced in two by Obi-Wan Kenobi at the end of Episode I: The Phantom Menace.

However, if you’ve watched the Star Wars: The Clone Wars series, you’d know Darth Maul survived his fight with Obi-Wan. You’d also know he now has robotic metal legs. We have an even more in-depth explanation on where Maul has been and what it means for future Star Wars movies here. Actor Sam Witwer is voicing Maul in Solo, who also provided the character’s voice on The Clone Wars show. (FYI on the timeline, which can admittedly get confusing : The Clone Wars series takes place between Episode 2: Attack of the Clones and Episode 3: Revenge of the Sith. Solo: A Star Wars Story takes place some time after Episode 3, but before Episode 4: A New Hope.)

The worst things about Solo: A Star Wars Story

So what’s going on here?

There’s at least a three-year gap between when we first see Qi’ra at the beginning of Solo and when we and Han catch up with her later in the film. At the start of the film, both Qi’ra and Han are presented as young, bright eyed and hopeful, despite their not-too-favorable situation as slaves to local gangsters. After she and Han reconnect on the yacht of Dryden Vos, the gangster played by Paul Bettany , it’s hinted that in the time since he’d last saw her, she’s changed. In what way? Well, we’re told that she she’s done things Han wouldn’t understand.

At one point in the middle of the film, we get a glimpse of just how much more capable she’s become. We see her take down a guard using some form of hand-to-hand combat, but the scene is intentionally obstructed by a door, so we don’t really see how she does it. She mentions she’s learned a bit of Teras Kasi from Vos. Teras Kasi is a form of hand-to-hand combat that exists in the Star Wars universe. If it sounds familiar, but you can’t place it, you’ve probably heard about it from this 1997 PlayStation game, Star Wars: Masters of Teras Kasi . Admittedly, I’d completely forgotten Teras Kasi was a thing until this moment in the film.

However, it’s not until the end of the movie that we truly get to see Qi’ra in action as she fights and pretty handily takes Vos out using some impressive hand-to-hand combat skills. Afterward, we see her contact a hooded figure with a voice familiar to anyone who’s watched Clone Wars. The figure revealed as Darth Maul.

Seriously though, how’d she learn to fight like that?

Here’s what I think the story is. Darth Maul has been training Qi’ra as his apprentice and has taught her Teras Kasi. (OK, about to briefly get deep in the nerdom weeds here): In the Star Wars Legends universe, which refers to books, comics and video games Lucasfilm does not recognize as canon, Maul was a practitioner of Teras Kasi, and while in the film it’s not explicitly stated that he has anything to do with the martial art, it can easily be assumed he passed on his skills to Qi’ra.

I was entertained by Solo , but it didn’t leave me with any great desire to see it again anytime soon. Aside from a few cool moments, I just wasn’t invested in the story the way I typically am with Star Wars films. However, the Qi’ra reveal and Darth Maul appearance was a huge surprise for me and for sure was my favorite moment in the film.

I don’t really care what happens next with Han or Lando, but I can’t wait to see where they take Qi’ra’s character. She proved herself quite the combatant and a potential female Sith (if indeed that’s what’s she’s in training to be) isn’t something we’ve seen on the big screen before. Also, it’s just so exciting to have Darth Maul back on the big screen. His fight with Obi-Wan and Qui-Gon Jinn in The Phantom Menace is still one of my favorite lightsaber battles ever. Hopefully we don’t have to wait too long to find out what happens next.

Solo: A Star Wars Story : Here’s everything more we know about the latest Star Wars film, including when you can see it, who else stars and what you can expect when it opens.

Infinite Guide to Marvel : From the Avengers and MCU to the X-Men and everything in between, our biweekly newsletter will help you stay up to date on all things Marvel.