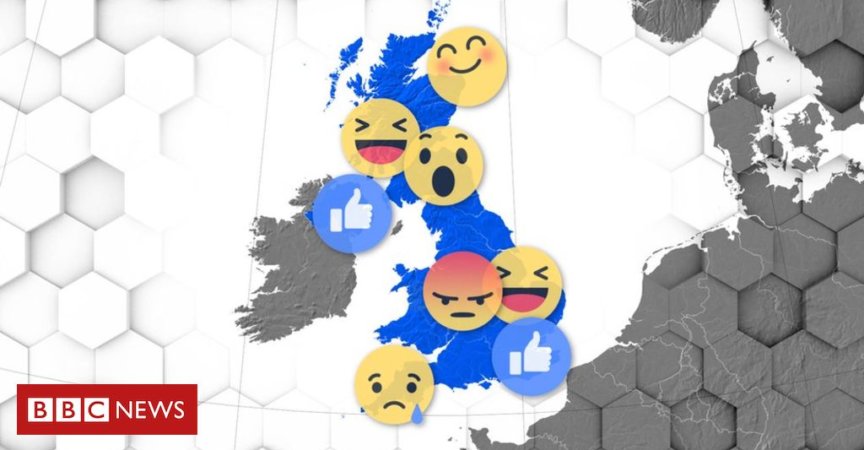 
General Election 2019: Has your local Facebook group been hijacked by politics?

As the election draws closer, Facebook groups originally intended for gentle chat about hedgehogs and wheelie bins are being overwhelmed by bitter political arguments.

“I’m disgusted,” says Julie Graham. As she drinks a cup of coffee in the bar of a hotel overlooking the English Channel, she becomes slightly flustered. She’s trying to explain why she feels under attack simply for expressing her views online.

“If I went out in the street,” she says, “would these people give me the same abuse?”

Patsy, one of her Facebook sparring partners, challenges Julie. Patsy contends that their local group is a great way to hear opposing views.

It’s the first time Julie and Patsy have met face to face. Their online arguments happen in an unusual place. It’s not a forum devoted to politics – but rather a Facebook group normally filled with pictures of beaches, posts about yoga classes and promotions for local Christmas markets.

With its grand facades, wide promenades and gently sloping beach, St Leonards-on-Sea looks a bit like the French Riviera, even though it feels very different on a biting December day.

The Facebook group in question, St Leonards on Sea is THE place to be! , was set up in 2008 to celebrate this small town nestled next to Hastings on the East Sussex coast.

With those aforementioned scenic photos and yoga posts, the group collected around 6,000 members over the years. By Facebook standards that’s not very many at all, but it’s certainly enough to make it one of the town’s main sources of information.

A few years ago, the man who set up the group died. David was the sole administrator – the only one who could enforce the group’s rules and keep conversations light and local.

St Leonards on Sea is THE place to be! became a “zombie group” – one with no real oversight over what was being posted.

In recent months, as the national political drama has ramped up, this once-tranquil group became overwhelmed by political argument.

The power vacuum at the top allowed aggressively political users to run riot, according to Russell Hall, a plant biologist who runs a separate local politics-focused Facebook group in his spare time.

In September, David’s widow wrote a long post decrying the fact that the group had been “hijacked”.

“This group was not created for this purpose,” she wrote. “I find the misuse of what I had hoped would be David’s lasting legacy to the town he loved quite disgusting.”

Her plea was ignored. When a general election was called a few weeks later, the online acrimony escalated further.

St Leonards-on-Sea is part of the hotly contested constituency of Hastings and Rye, which was narrowly held by the Conservatives in 2017.

As election rows hit fever pitch, several members of the Facebook group stepped in and managed to take control. There were two new rules: “Be kind and courteous” and “no hate speech or bullying”.

But this did not quell the shouting. The new regime also prompted pushback from members who felt the new moderators were trying to influence the direction of group.

Now, with just a few days until the vote, non-political posts are few and far between. Some people clearly relish the arguments, while others want the group to return to its gentler origins.

We assembled some of the feuding members for a discussion IRL (“in real life”).

The three women who spoke to us all said they’d joined the group for the same general set of reasons: to find out more about local charities and upcoming events, and to share pictures of their pets with fellow residents.

But as 12 December approaches, there is no hiding from politics.

Anna Keiller says she was recently booted out of the group following a dispute with one of the moderators. She wants the group to stick to non-political topics, like the local wildlife:

Julie Graham joined the group last week, also for non-political reasons, but within a couple of days she found herself getting embroiled in debates with the group’s most active users.

When she posted that she’s planning to vote Conservative, sarcastically noting that this “seems to be a crime”, the message attracted nearly 200 comments. Most were highly critical, including: “you must be very backward” and “it’s not a crime being sociopathic”.

Julie told the BBC that along with a torrent of abusive comments she got nasty private messages.

Patsy Solanki is one of the Labour supporters who responded to Julie’s post, although not in an abusive way.

Patsy admits there’s some “trolling” in the group, and says it’s unacceptable. But overall she’s a big fan and thinks the forum is a source of “fantastic debates and conversations”.

She says it helps her hear perspectives outside her own “filter bubble” – a relatively insular social media community.

In the seaside hotel bar, with the sun streaming in the windows, civility and politeness ruled – a clear contrast with overall tone of the group.

In every region of the UK, BBC Trending has found numerous examples of local groups flooded with political content, from Flint in Wales to Walthamstow in London, from Shaftesbury in Dorset to Inverness in Scotland.

But the tone – as you may have noticed in your own groups – varies wildly. About 250 miles north of St Leonards-on-Sea, another Facebook group feels more like the gentle suburbs than the Wild West.

Jason Lawal runs the Stocksbridge and Surrounding Areas Community Forum. It’s a typical local group focused on this town north-west of Sheffield, on the edge of the Peak District National Park.

The group has around 9,500 members – equivalent to around half the local population.

Jason spends his days driving around the country cleaning up devastated buildings. When he met us he had just returned from a flooded pub in Bristol.

On the internet he mitigates disasters of a different kind – political arguments that descend into abuse – and says this has become a much more intense job since the election was called.

To demonstrate the eclectic mix of posts, Jason scrolls through his phone reading out some recent ones.

“There’s somebody offering jewellery repairs, somebody who found a hedgehog and wants to know how to feed it, a picture of a nice reservoir… and then somebody saying ‘Whoopee, the Conservatives are on course for their first South Yorkshire victory.'” Beneath that post are hundreds of comments both for and against Jeremy Corbyn.

In the group, there are even posts from local candidates, setting out their positions and answering residents’ questions.

“It’s like the One Show in Yorkshire,” says Jason. “I quite enjoy it really. At least everybody’s taking an interest in local life.”

Jason tries hard to keep discussion focused on local issues. He admits that in the chaos of an election campaign it’s hard for him to keep up with the daily avalanche of posts, but he sees himself as an impartial arbiter, and takes that role seriously.

One member, Jenny Cooke, says the group is the only way of engaging with people who have different political viewpoints. But this Labour supporter says the tone of the comments can be “unpleasant” and “sometimes slightly threatening”.

“It can be quite scary because it is local and people might find out who you are or know where you live,” she told us in a Stockbridge cafe.

Once upon a time people may have filed into town halls or village squares to debate the issues of the day. Now modern technology makes it easier for people to engage in political debate, especially in the depths of a British winter.

But social media can also suck in those who never intended to spend their evenings arguing with strangers about politics.

Unlike the village square, on Facebook you can’t look someone in the eye or read the tone of their voice. That distance means people sometimes suspend their usual social niceties. The job of keeping things on track falls to volunteer moderators.

It’s easy for conversations to get hijacked. Those who come for the hedgehog photos may end up getting sweary rants about politics instead.

The following candidates are standing in Hastings and Rye:

The following candidates are standing in Stocksbridge and Penistone:

Have you spotted something interesting on social media? Email us