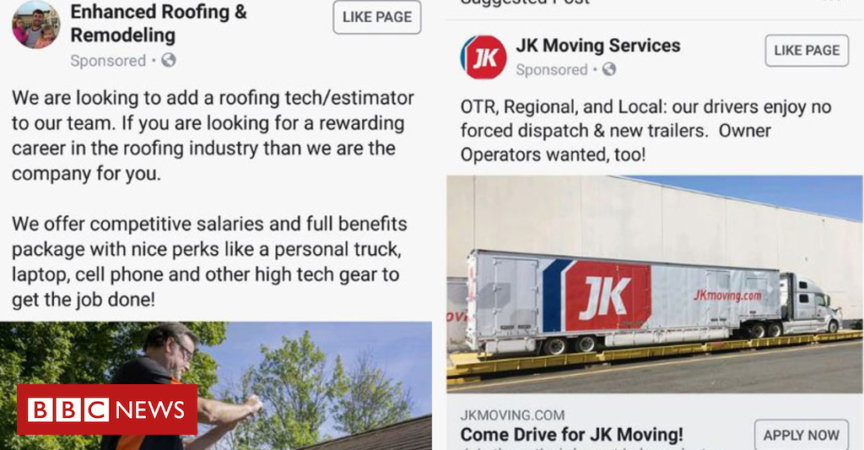 Van driving, roofing, police work – all jobs for men. At least, that’s what a cluster of job ads placed on Facebook seemed to suggest.

The American Civil Liberties Union (ACLU) on Tuesday submitted a complaint to the US Equal Employment Opportunity Commission (EEOC) alleging that Facebook’s advertising system allows employers to target job ads based on gender – a practice the ACLU says is illegal.

Specifically, the complaint refers to three women in the states of Ohio, Pennsylvania and Illinois who were not shown advertisements for what have traditionally been considered male-dominated professions.

The complaint highlights 10 different employers who posted job adverts on Facebook – for roles such as mechanic, roofer and security engineer – but used the social network’s targeting system to control who saw the ad. In one example, that targeting meant one job was promoted to “men” who were “ages 25 to 35”, and lived “or were recently near Philadelphia, Pennsylvania”.

A separate investigation by ProPublica discovered what it said were more examples showing a similar pattern.

Earlier this year the investigative journalism site released a tool which readers could use to collect data on the Facebook ads they had seen, and send that information directly to ProPublica for analysis.

Using that method, the site said it discovered men were targeted specifically in dozens of cities around the US for driving jobs with Uber. This conclusion was based on 91 ads placed by Uber’s recruitment arm, only one of which was targeted specifically at women, with three not targeting any particular gender. The rest were designed to be seen by men only. Uber has not returned the BBC’s request for comment.

However, this data should be treated with caution. It is not clear that any broad conclusions can be made about perceived discrimination on Facebook.

While one advertisement in isolation may be targeting men specifically, there may have been an equivalent advertisement targeting women running in the same time frame – ads that may not have been picked up by ProPublica’s tool. Furthermore, if a user clicks on an ad to see why it has been targeted – as in the ACLU complaint – they will be told why they specifically saw the ad, but not details on the entire audience for the ad.

The BBC understands Facebook is in the process of putting together data to dispute the findings and respond to the ACLU’s complaint.

While targeting users based on gender may seem relatively harmless when it comes to, for instance, clothing brands, doing so for job advertisements may be against US law. The Civil Rights Act of 1964 specifically prohibits discriminating against a person because of “race, colour, religion, sex, or national origin”. The law applies to every stage of employment, including recruitment.

“When employers in male-dominated fields advertise their jobs only to men, it prevents women from breaking into those fields,” said Galen Sherwin, from the ACLU’s Women’s Rights Project, arguing that “non-binary” people, those who choose not to identify with a specific gender, are also excluded.

“What’s more, clicking on the Facebook ads brought viewers to a page listing numerous other job opportunities at these companies for which job seekers might be qualified.

“Because no women saw these ads, they were shut out of learning not only about the jobs highlighted in the ads, but also about any of these other opportunities.”

Facebook said it was reviewing the ACLU’s complaint and looked forward to “defending our practices”.

“There is no place for discrimination on Facebook,” said spokesman Joe Osborne.

“It’s strictly prohibited in our policies, and over the past year, we’ve strengthened our systems to further protect against misuse.”

The company has recently removed over 5,000 targeting options for advertisers. The move was prompted by a lawsuit accusing the firm of unlawfully targeting users based on race or sexual orientation.

Do you have more information about this or any other technology story? You can reach Dave directly and securely through encrypted messaging app Signal on: +1 (628) 400-7370