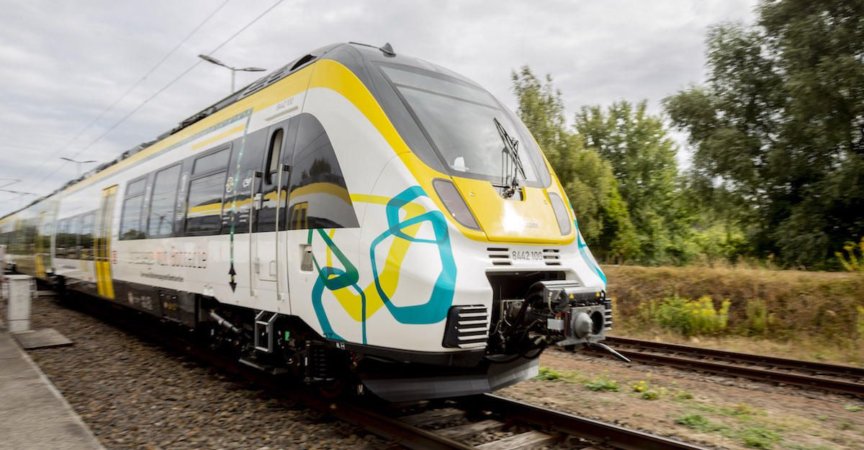 Electric light-rail trains are an increasingly common sight in cities around the world. Their ability to carry large numbers of people efficiently and with minimal pollution or noise is important as cities become more crowded and emissions regulations become even stricter .

The problem with these overhead-wire electric light-rail trains comes when you want to take them out of the city and run them in areas without electrified routes. Previously this would’ve required the use of a diesel-electric locomotive, which brings with it the noise and pollution traditionally associated with internal combustion engines. Bombardier Transportation, however, plans to address this with battery-electric trains  in a program it’s testing out in Germany, it announced on Wednesday.

“We want to continue to electrify rail transport. A train that can charge its batteries from the overhead line while driving is a huge step toward this and the epitome of innovation,” Enak Ferlemann, state secretary at the Federal Ministry of Transport and Digital Infrastructure and Federal Commissioner for Rail Transport, said in a statement. “On nonelectrified or only partially electrified routes, the motto is: Move away from diesel on the tracks and toward cleaner and more environmentally friendly mobility.”

The Bombardier Talent 3 is a hybrid electric passenger train, though its hybrid system is a little different than what you’re probably thinking. Rather than supplement its battery-electric drivetrain with an internal combustion engine, as in automobiles, the Talent 3 uses the overhead wires to power itself in the city while simultaneously charging its batteries for use on short intercity trips.

The Talent 3 prototype uses four Bombardier Mitrac traction batteries that give the train a range of approximately 25 miles. That doesn’t sound like much, but for the relatively short distances between cities on its German test route, it’s sufficient. Bombardier plans to extend its range to around 62 miles in the next generation.

“With our new battery-operated train, we are putting real innovation on the tracks,” said Michael Fohrer, head of Bombardier Transportation. “This train is Bombardier’s technological response to challenges such as air pollution, climate change and scarcity of resources. Around 40 percent of the German rail network is not electrified. The Bombardier battery-operated train is an attractive option to counter that, both economically and ecologically speaking.”

German railway authority Deutsche Bahn will begin a 12-month trial program with the Talent 3 prototype in early 2019 in the Alb-Lake Constance region.