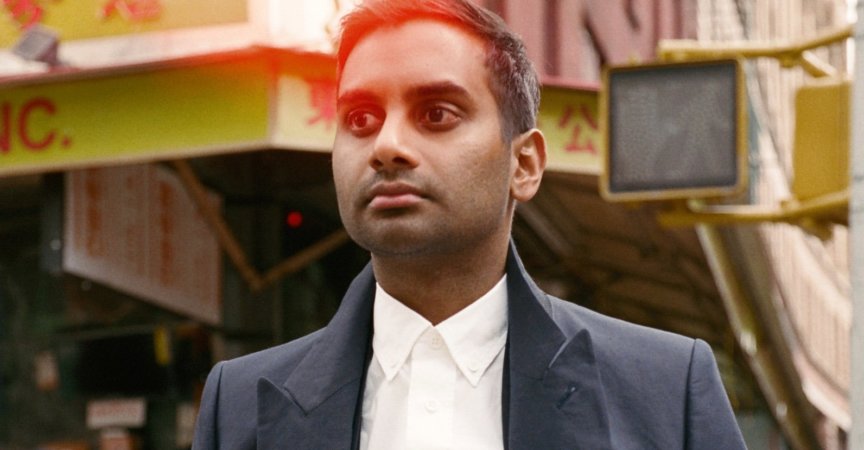 In 30 seconds, Aziz Ansari reenacted Twitter before a live theater audience. He reminded the crowd of a social media scandal: a pepperoni pizza from Domino’s that kind of looked like a swastika and kind of looked like a pizza, turning its chef into an instant pariah. He asked the audience members to raise their hand if they’d seen a swastika and then if they hadn’t, a kind of outrage Rorschach test. He asked one man where he’d first encountered the image. The guy said he’d seen it in *The Washington Post . Spoiler: He hadn’t. No one had. Because swastika pizza has never existed. Ansari made it up.

Ansari’s point, he said, wasn’t to humiliate his audience of posers, though he likely did. It was to prove that, right now—which, not so incidentally, is the name of this new Netflix comedy special—people need to have an opinion on everything, even things they know nothing about, in order to feel valid. He even came for the prudent souls who refrained from raising their hands at all, saying he knew that every single one of them had been more worried about missing a viral moment than the fate of swastika pizza chef. It got a big laugh, so he may have been right. Damn, I thought. This is relevant.

Right Now would be far easier to process if it weren’t, and so would Aziz Ansari, human swastika pizza. Last year, Ansari was accused of sexual misconduct by a woman who went on a date with him, drawing a large but somewhat confused backlash against the comedian. His was one of the most ambiguous #MeToo moments. The woman’s allegations, published anonymously on a now-defunct website, sounded like a garden-variety bad date to some and predation to others. It’s impossible to talk about Right Now without talking about the scandal, and, indeed, Ansari makes his brush with outrage culture the set’s backbone, providing scaffolding for all its most important moments, the good and the bad.

It starts bad. Ansari opens the show with an anecdote about being mistaken for fellow comedian Hasan Minhaj that culminates in him joking that the sexual misconduct scandal had actually been Minhaj, too. Then the camera gets right up in his face and his voice goes from Spongebob squeaky to a low register with more fry than a Paula Dean dinner party. He murmurs about how terrible he feels and tells a story about a fan saying that Ansari’s situation had made them rethink every date they’d ever had. He hopes that means he’s helping people. Cue applause. It’s a better attempt at a #MeToo redemption arc than Louis CK, who, like his genitals, tends to just appear without audience consent and without apology. It’s better than Charlie Rose’s pitch for a TV show where he interviews other men who have been accused of sexual misconduct. Boy is that bar low.

The best bits are about performative wokeness, of which Ansari has been both beneficiary and victim. He lampoons the anxieties and earnestness and arrogance of the grand white progressive competition for Instagram likes from other white progressives so well that even I, alone at my work desk and still recovering from that Hasan Minaj joke, laughed aloud. His sendup of people combing back through old tweets and movies and TV shows for inevitable signs of moral impurity are similarly sharp. Ansari understands the public opinion maelstrom that his career will live and die within—its randomness, its hivemindedness, its self-serving cruelty.

He doesn’t understand the social movements that give that maelstrom meaning, not as they relate to his own scandal, anyway. He dwells for a long time on the legacies of R. Kelly and Michael Jackson. Mostly, he talks about how lucky the audience is that the evidence of their allegiance to these fallen figures isn’t a matter of public record. (Ansari has talked about Kelly during all of his standup specials.) He talks about the public’s interest in documentaries about Kelly’s and Jackson’s alleged victims as if that interest is creepy. He talks about the inconvenience of wanting to play Michael Jackson at weddings but fearing judgement. He does not mention #MeToo.

It’s impossible to ignore the fact that he’s talking about himself, of course—how unfair it is that his past and private life are subject to public scrutiny, how terrible it is that people chime in without knowing the facts. But the impression he gives is less of artful implication and more of thoughtless evasion. When Ansari reminds us of his old R. Kelly jokes, it’s not to reflect on Kelly’s scandal or the question of art vs. artist—it’s to wonder whether those jokes have aged badly. Whether he and his comedy look worse. For Ansari, the stakes of scandal are always and only personal—a point he makes so effectively when he embarrasses the audience in the swastika pizza bit. Given the opportunity to apply those lessons to himself, it slips through his fingers like pepperoni off a slice.

At the end of the set, after a few distractions about his girlfriend, gender disparities in birth control, and the terrible ways we treat our parents, Ansari circles back to his scandal and that soft, low voice. He says he’s grateful to the audience now, and that when his career was at its nadir he’d felt like he had died. He invites the viewer to see him as reborn. It’s not clear who benefits more from that rebirth—Ansari or his audience.