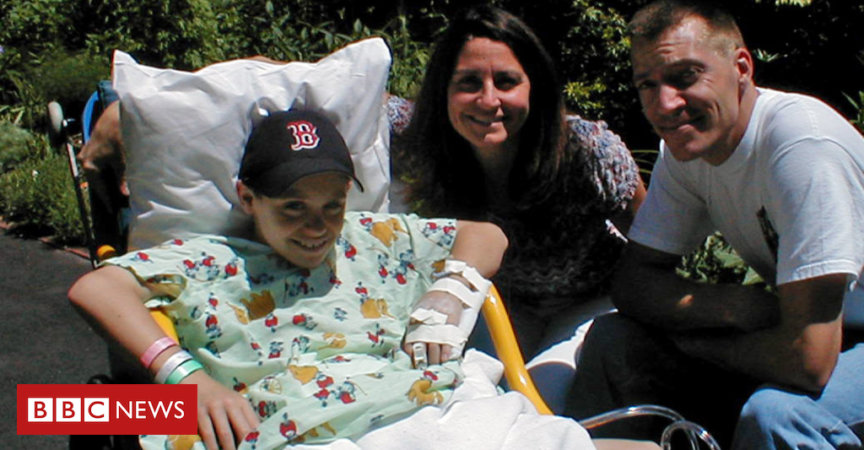 Luke Massella is one of about 10 people alive walking around with a replacement bladder that has been grown from his own cells.

He was born with a condition called spina bifida, which, from birth, left a gap in his spine.

By 10 years old, he had survived a dozen surgeries and beaten doctors’ initial expectations that he’d never walk. But then a malfunctioning bladder made his kidneys fail.

“I was kind of facing the possibility I might have to do dialysis [blood purification via machine] for the rest of my life,” he says. “I wouldn’t be able to play sports, and have the normal kid life with my brother.”

An enterprising surgeon, Anthony Atala at Boston Children’s Hospital, took a small piece of Luke’s bladder, and over two months grew a new one in the lab.

Then in a 14-hour surgical procedure he replaced the defective bladder with the new one.

“So it was pretty much like getting a bladder transplant, but from my own cells, so you don’t have to deal with rejection,” says Luke.

Rejection is when the body’s immune system attacks transplanted cells that come from another organism. Using tissue grown from a patient’s own cells helps combat this effect.

Luke went on to be a wrestling coach in the Connecticut public schools and now, at 27, runs events in the jewellery industry.

“Pretty much I was able to live a normal life after,” he says.

He underwent surgery 17 times before he was 13, but hasn’t had to since.

His team has developed “eight cell-based tissues we put into patients,” he says, including engineered skin, urethras, and cartilage, all grown in the lab.

These engineered organs are going through clinical trials for approval by the US Food and Drug Administration.

“You need to know how to make these organs by hand, then the bioprinter is really a scale-up tool,” says Dr Atala, director of the Wake Forest Institute for Regenerative Medicine in North Carolina.

In other words, bioprinting would enable these organs to be made in an affordable, consistent, and precisely constructed way, he believes.

“Flat structures like skin” are easiest to print, he says. Then “tubular structures like blood vessels and urethras” are a little more complex, with “hollow non-tubular organs like bladders” harder still.

But hardest are “solid organs like hearts, lungs, and kidneys,” with “so many more cells per centimetre”.

For these highly complex organs bioprinters provide a precision that surpasses human hands, he says.

Bioprinting has taken off following a dramatic discovery by Shinya Yamanaka and Sir John Gurdon, who a Nobel Prize for their work in 2012.

Adult ordinary cells can now be reprogrammed to make stem cells – called induced pluripotent stem cells – which can be used to make any other cell in the body.

“A lot has happened in the last couple of years,” says Steven Morris, chief executive of bioprinting start-up Biolife4d.

Mr Morris is working to bioprint a heart using these pluripotent cells over the next year. This will initially be a smaller version of the organ, he explains, but could eventually help pharmaceutical companies bypass testing trial drugs on animals, he says.

And ultimately, bioprinting organs from people’s own cells will solve the “huge lack of supply” in organs for transplant, says Mr Morris, and do away with the need for anti-rejection immunosuppressant drugs.

Specialist printers could even reproduce cancers tumours, giving doctors the chance to test “which treatment could specifically work on that patient,” says Erik Gatenholm, chief executive of Swedish start-up Cellink.

His firm has been given a €2.5m ($2.9m; £2.2m) grant from the European Union to develop these tumour-modelling printers.

Bioprinters also give us a way of “quickly laying down small quantities of fluid to test if a new antibiotic would work for that specific patient,” says Annette Friskopp, vice president for specialty printing systems at the large tech firm HP in Palo Alto.

This could help tackle the growing and serious problem of antimicrobial resistance – the rise of “superbugs” traditional antibiotics can’t kill.

HP is partnering with the US Center for Disease Control to deploy printers in four regional labs in the US this autumn.

Printers of any kind need ink, and bioprinters are no different. “Bioink” is a gel that can be extruded through a printing nozzle and mimics the suspension lying between cells, called the extracellular matrix.

Both university labs and start-ups, such as Cellink, have been developing bioinks that can be used with many types of cells, says Ahu Arslan Yildiz, a biochemist who heads a research group at Izmir Institute of Technology in western Turkey.

And these “universal” bioinks are growing more and more “processable and easy to handle,” says Ms Yildiz, while also not being toxic.

Another breakthrough in the fast-developing field comes from Japan.

Most bioprinting uses a scaffold to hold cells in place. And once cells are “coaxed to a certain level, they begin to self organise and assemble,” says Arnold Kriegstein, director of the stem cells and regeneration medicine centre at the University of California, San Francisco.

The scaffold can then be removed.

But Koichi Nakayama, at Saga University in southern Japan, has been developing a way to create 3D tissue without scaffolds.

Instead, he lances small spheres on a fine array of needles, called a kenzan.

Dr Nakayama, a doctor and chairman of the university’s Regenerative Medicine and Biomedical Engineering department, is now “preparing the first human trial in our university” to implant dialysis tubes “just made from a patient’s own skin cells”.

So bioprinting is making huge strides and promising to give many of us a new lease of life.