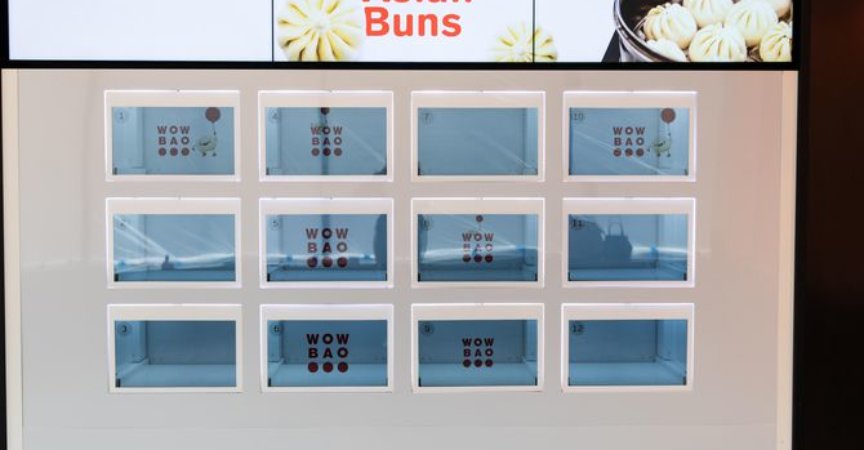 When someone mentions “robot restaurant,” I first think of an LED and laser show at a Tokyo venue  where remote-controlled robots dance with bikini-clad girls in a sensory show that accompanies dinner.

But the reality of robot restaurants is generally way more pedestrian and low-key.

One example is Eatsa, the San Francisco-based restaurant company that takes orders through iPads and dispenses meals through automated machines. Until now, Eatsa has been using this tech to serve up quinoa bowls to health-food fans in its own restaurants. But the company announced Friday that it’s expanding its robotic platform to the fast-casual restaurant chain Wow Bao next month.

At Chicago-based Wow Bao , you can already order your steamed buns via its app or an on-site kiosk. But with Eatsa’s tech, you’ll also be able to collect your meal from an LED-lit cubbyhole displaying your name. Text appearing on the front of the cubby, one amid a larger array, will tell you when your order is cooking and when you can double-tap on the box to collect your food.

It’s a quick turnaround for Eatsa, which only a couple weeks ago announced the closing of five of its seven restaurants  across the country. The company has now switched its focus to offering automated tech as a platform to other restaurants such as Wow Bao.

A combination of artificial intelligence, personal screens, robotics and — perhaps most crucially — the willingness of hungry customers to skip human interaction is coming at the right time to make Eatsa’s shift possible. It’s part of a slow creep of technology that’s transforming our experiences of dining out, and even dining in, thanks to advances in delivery tech .

Eatsa’s concept might seem exotic today, but Neil Stern, senior partner at retail consulting firm McMillan Doolittle, said we can expect to see more of this kind of tech popping up. “Does it make sense to hide assembly of orders and deliver via a cubicle?” he said. “Maybe not. But Eatsa does present a vision of the future that will be copied or enhanced.”

The first Eatsa-equipped Wow Bao will open in the Gold Coast neighborhood of Chicago on Dec. 1. Using the technology, Wow Bao plans to double its sites in 2018. It currently has seven company-owned locations, plus airport, college campus, hotel and stadium franchises.

“When I first heard about Eatsa opening in San Francisco, I jumped on a plane to come see it,” Wow Bao President Geoff Alexander said in a statement. Alexander praised the technology as both entertaining and efficient. “I knew right away that Eatsa would be the perfect technology to incorporate into our future locations.”

Do robots belong in the kitchen?

At Eatsa and soon at Wow Bao, the robotic technology is front and center in the restaurant, serving customers and providing them with an experience to go along with their takeout. In other restaurants, robots are still strictly consigned to the kitchen.

At Cafe X and Zume, both based in San Francisco, robots  make lattes and pizzas, respectively. California startup Miso Robotics has built a kitchen assistant robot called Flippy, which from early 2018 is expected to be grilling burgers in CaliBurger restaurants.

Flippy doesn’t just have its flipping action on point. It also uses computer vision to track the patties as they grill, turning them out a perfect medium rare — or however a restaurant chooses to cook its burgers — and ensuring they are cooked safely. The robot is built out of readily available parts, such as sensors, cameras and robotic arms. The rest of the work is done by artificial intelligence, which could potentially be trained to perform other kitchen tasks.

“The beauty of the Miso AI software is that Flippy is able to learn the tasks that are most needed, giving it flexibility and adaptability to fit within all kitchens, not just those of fast food restaurants,” said David Zito, CEO of Miso Robotics.

This might be great for restaurants, but it doesn’t sound like such good news for restaurant workers. Unfortunately for any fry cooks out there, restaurant jobs have a high turnover. The rate was 76 percent last year, according the Bureau of Labor Statistics . So owners and managers are looking for more stable alternatives.

Greg Creed, CEO of Yum Brands, which owns KFC, Pizza Hut and Taco Bell, told CNBC  earlier this year that he expects to see an increasing number of robots working in human roles by the mid- to late 2020s. But he also offered some reassurance to kitchen staff, noting that “it would be very hard” to fully automate restaurants.

“In terms of ordering using kiosks, mobile ordering — I think that part of the process will change,” he said. “The manufacturing part? I think we’re a little further away.”

Even Zito, who is pioneering the use of robots in kitchens, said he believes humans will continue to play an important role as the robot revolution rolls on.

“We envision a highly skilled, co-botic future in which robotic kitchen assistants and people work side by side, so customers can enjoy a consistently prepared meal every time,” he said. “It’s through the combination of AI with robotics, as funneled through the needs and wants of a restaurant’s staff, that we envision creating a renaissance in the industry.”

The Smartest Stuff: Innovators are thinking up new ways to make you, and the things around you, smarter.

Virtual reality 101: CNET tells you everything you need to know about VR.