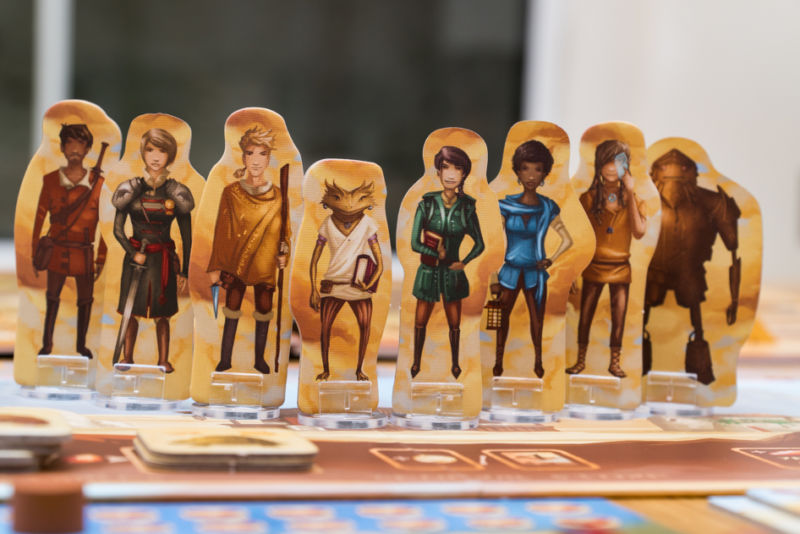 Review: Near and Far, a story-driven board game that almost works

When I was five years old, I discovered The Legend of Zelda on my cousin’s state-of-the-art Nintendo Entertainment System. It was unlike anything I’d played before. Where other games laid down unambiguous missions and linear levels, this one handed me a sword and a handful of hit points, then asked: “So what are you going to do?”

I’ve appreciated that sandbox sense of freedom in games ever since, and it’s something that Near And Far, a campaign-driven board game from designer Ryan Laukat, strives to emulate. A sequel to his 2015 release Above and Below, Near and Far casts players as heroes embarking on perilous quests across a series of fantasy realms. While that might sound like the premise for at least a million other tabletop adventure games, Near and Far comes with a level of style, imagination, and originality that elevates it above the generic orc-stomping titles on the market.

The first thing you’ll notice when you open Near and Far’s box is the quality of its presentation. As with previous releases like Eight Minute Empire and Islebound, Laukat isn’t just the game’s designer, he’s also its illustrator and publisher. He work here has injected Near and Fa r with real charm and personality. The artwork is playful, adventurous, and just the right side of cutesy. Its characters are full of… well… character, with a wide range of genders and ethnicities represented—and not a chainmail bikini in sight. Its world is depicted in beautiful cartography that looks like something from an animated movie.

Once you’ve spent a moment appreciating the sheer prettiness of it all, you’ll want to see how it works. Near and Far’s action plays out on multiple fronts. There’s an individual player board representing your character, where you’ll keep track of things like your health, equipment, and any non-player allies you’ve recruited on your quest. Then there’s an atlas, a book of maps showing the different environments you’ll pass through on your adventures. And a town board shows locations like stables and saloons that you can visit when not otherwise engaged in heroic deeds. Finally, the story book contains Choose Your Own Adventure -style snippets of narration detailing the encounters and characters you’ll run into on your journey.

These pieces all work together. In town, you’ll stock up on food at the farm, dig for treasure in the local mine, and meet adventuring companions at (where else?) the tavern. Only one player can visit a building at a time, though, which means you’ll need to decide on your priorities and pursue them with dogged determination. That’s particularly important when it comes to assembling your party of adventurers, each of whom boosts your abilities in different ways, making you faster, stronger and stealthier once you set off to explore the wider world.

That exploration takes place on the pages of the game’s atlas, which serves as a secondary board with maps representing regions you’ll explore over the course of your campaign. You’ll spend health points to move from one spot to another, automatically returning to town when you deplete them all. Your initial excursions will be fairly timid, not venturing far beyond your starting point. As you play, you’ll be able to set up camps, which allow you—and your opponents—to pass through areas of the board for free. The map thus opens up over time, not just for you but for everyone, and a big part of the game lies in seizing opportunities created by your opponents, letting them blaze a trail before you dash in to fight bandits, set up trade routes, and otherwise suction up victory points.

This is the meat-and-potatoes gameplay of Near and Far , but the real draw is the game’s story-driven hot sauce. Visit certain points on the map and you’ll be prompted to consult a specified passage in the story book. Each one is a short snippet of plot followed by a dilemma. Do you find and recover the traveler’s stolen property or keep it for yourself? Do you give a few coins to the old beggar or ignore his pleas? Do you open the door marked with mysterious runes or leave it well alone? Your choices can have positive or negative outcomes, and they branch out over multiple play sessions, with the consequences of prior decisions coming back to bite (or aid) you later on.

It all feels a lot like playing an old Fighting Fantasy game book, and Near and Far does a decent job of maintaining interest in the campaign from one game to the next. But it also highlights what, for me, was the game’s greatest flaw. While the unfolding narrative is a lot of fun, it doesn’t quite sit comfortably with the route-building, stat-boosting, more mechanical aspects that make up the bulk of the game. Actual in-character plot decisions are the highlights of every session, but opportunities to enjoy them are sparse. Everything else feels slightly muted by comparison, like having to finish your homework before you’re allowed to play video games.

If you are in the market for a ruthlessly opportunistic route-building game, better options are available. Via Nebula and Yamataï both cover similar ground in interesting ways and, while they don’t have anything approaching Near and Far ’s narrative appeal, are both fantastic games in their own right.

Near And Far has undeniable charms, but it’s difficult to see who the intended audience is. If you’re looking for a tight, strategic experience, then either of the aforementioned games is a better bet. If you’re looking for story-driven, open-ended adventure, you’ll have a better time with Sherlock Holmes: Consulting Detective or a roleplaying game like Dungeons & Dragons. Near and Far seems to be pitched somewhere in the middle; in trying to be two things at once, it doesn’t quite manage to excel at either of them.

The game’s open-world premise is enticing, and it’s not hard to find something to like in its stylish and whimsical presentation. But Near and Far never fully reconciles its mechanical yin with its narrative yang, and the disjointed result means that it only ever manages to be good, not truly great.