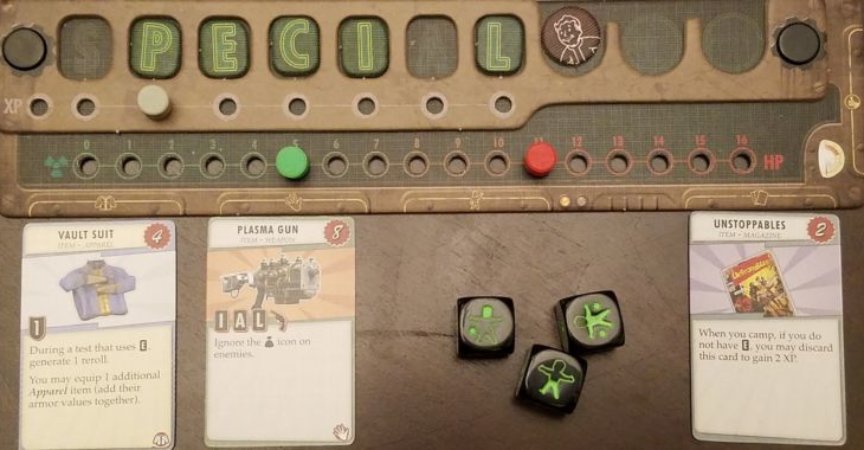 Review: Fallout: The Board Game

Would you be surprised if I told you that the new Fallout board game from Fantasy Flight Games (FFG) was something special? You really shouldn’t be, since FFG has a fantastic track record of nailing intellectual properties like Battlestar Galactica, Star Wars, and Doom. Fallout is the latest success here, a tabletop design that feels like a passionate love letter to its source material, even as it stumbles in some areas.

This cardboard version of the digital classic is best described as a narrative adventure game for up to four players. Participants compete for thumbs (the energetic expression for victory points) by engaging in branching story paths, acquiring gear, and throwing their weight behind one of the factions vying for power.

The adventure game genre is an old dog. Finding lasting success requires a clever hook to gain separation from classics such as Talisman and Runebound. Mage Knight accomplished this through a focus on deep mechanisms threaded through hand management. Fallout goes a different direction, framing play around a wonderful emergent narrative. It offers you scripted stories to explore and wiggle room to forge your own chapters.

Four scenarios are included in the box, and each features two factions butting heads—say, a group of Synths battling the Institute in a tragedy questioning the nature of humanity. Other scenarios feature Children of the Atom, the Brotherhood of Steel, and of course the Enclave. It’s a veritable amusement park for fans to frolic through.

Play comes from the game’s enormous card library. Each card is numbered to ease cataloging, as you will be pulling cards from the stack often throughout play. Scenarios dictate which cards are placed face-up, offering initial nuggets of narrative for players to chase. Each card offers multiple objectives, which function as a race; get there first and you win a reward. Depending on which conditions are satisfied for each objective, rewards are handed out, and the environment will shift as that card is removed and a new one (or two) is pulled from the library.

Chasing these scripted objectives is addictive. You can choose to hunt a Synth or perhaps head to civilization to chase down a rumor. As the game plugs along, your investment grows and your pulse surges like a Deathclaw on the hunt.

In order to accomplish your goals, you will be exploring the game’s hex map and carefully using your limited action points on each turn. Wandering enemies such as raiders and hideous bloatflies will follow you around, converging on your position with a somewhat mindless AI. You will scavenge equipment such as a Pip-Boy, a shot of jet, or even a worn rifle (although firearms are oddly difficult to come by).

The attention to detail is remarkable. In addition to a bevy of beloved items and characters, the experience and combat systems are spectacular. The S.P.E.C.I.A.L. skill system as a whole is abstracted into gaining individual letter tokens that spell out that iconic acronym. Each letter gained offers a re-roll when partaking in a skill check using that skill. As you acquire experience, you will gain letters and possibly perks, which function as powerful single-use abilities.

Combat is similarly streamlined into a roll of the dice, looking for body part icons that match an enemy’s vulnerable areas. This distillation of the V.A.T.S. system is clever as a nod to the video game, but it’s also deceptively adroit at masking the math behind the roll. This allows you to remain cognitively immersed in the world as opposed to focusing on dry system elements. The dice-based tests are also resolved quickly, which keeps downtime minimized and play moving forward.

All of this is really secondary to the core focus on story. By throwing its identity completely behind the narrative quest system, Fallout walks a fine line. The writing and branching decision trees are definitely engaging. You will immediately be hooked on the choose-your-own adventure plot—though I’m not sure it quite pays off in most scenarios.

The game constantly lures you with excellent stories, but they’re often incidental to victory. Those agenda cards direct your optimal path and need to be followed if you care about winning. Often times, they will persuade you to prop up and advance a particular faction, which means that a large swath of narrative options are a no-go.

Perhaps more frustrating is that the story arc never quite reaches a climax. Since pursuing many of the snippets will simply waste your time or progress a faction in opposition to your own cause, it can feel as though you’re being railroaded in a specific direction. The game often ends abruptly without a satisfying final moment, clever quip, or wise reveal.

The benefit here is the drive to replay each scenario and pursue those strands you never untangled. Replaying a game whose most satisfying aspect is a scripted story can be an unsatisfying proposition, but the design team behind Fallout handled this challenge fairly well. Side-quests offer interesting twists and alternative encounters, even when replaying a known scenario.

The game also revels in randomness that may turn some off. Beyond the dice, there’s a certain level of fortune determined by the story objectives. A new card can hit the table with a goal of investigating Vault 83… and if one of the players happens to be near that rusted shelter, then they simply luck out.

The agenda cards highlight this randomness as well. If two of the three players receive starting goals encouraging them to prop up the Brotherhood of Steel, the third player can easily fall behind, since they don’t benefit from a natural alliance that was randomly determined. Those are the breaks in the wasteland, but if you’re looking for a keenly balanced competition, you may walk away frustrated. Again, the story experience is the star here.

One fortunate result of this design is that play count can scale down seamlessly. Fallout even works splendidly as a solo experience, with a lone player fighting the natural timer of factions growing in strength. This is surprisingly fulfilling, with the only loss being the absence of emotional connection through reminiscing with others about the series. This game does such a great job at manifesting those past experiences in the Fallout universe that you can’t help indulging in some shared nostalgia.

Despite the imperfections, fans of both the Fallout series and adventure games in general will find several fantastic concepts to hang their hats on here.