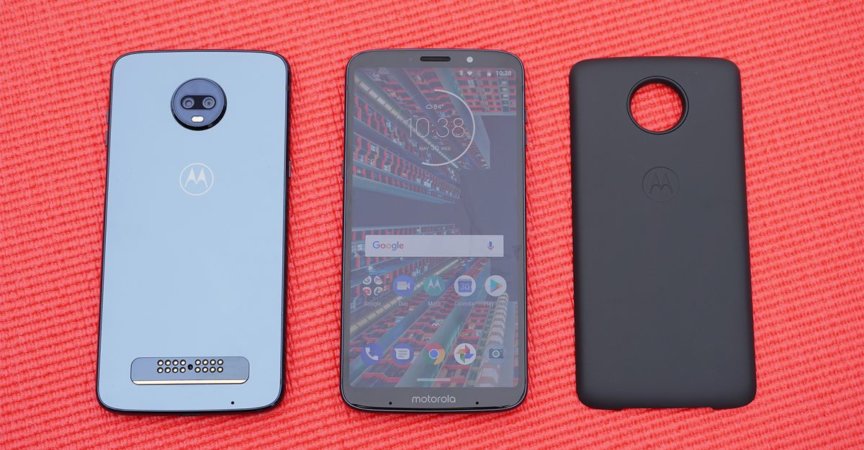 Gimmick or not, Motorola’s still committed to its modular phones and Moto Mod attachments.

To prove it, the company’s releasing the new Moto Z3 Play, which’ll be sold bundled with a battery Moto Mod for $499.

If you’re looking for a flagship Android phone — one with Qualcomm’s fastest Snapdragon 845 chip and loads of RAM — the Z3 Play is not your next purchase.

Rather than focus on pure performance — Motorola says tech specs are now pointless — the Z3 Play focuses on the experience.

That means a phone that’s made from premium materials like glass on the front and back, and aluminum for the frame.

It also means having a large 6-inch (full HD+ resolution) Super AMOLED display with an 18:9 aspect ratio for watching videos, reading, and playing games. Compared to the Z2 Play, the new display is 12 percent larger and has a 13 percent higher screen-to-body ratio.

Furthermore, there are four microphones scattered around the phone to better pick up your voice when you want to, say, activate the Google Assistant or Alexa.

Focusing on the experience also means cameras that don’t shoot potato photos. On the rear, there’s a dual-camera system — a 12-megapixel main camera paired with a 5-megapixel secondary camera. And on the front, there’s a higher-resolution 8-megapixel selfie camera.

Of course, megapixels are only one part of the camera story. The phones will come with many of the camera tricks introduced on the G6 and G6 Play like portrait, cutout, and spot color. One new mode I found especially fun to use was called “Cinemagraph,” which records a GIF, but lets you paint in only the parts where you want motion in.

The fingerprint sensor’s moved to side instead of on the back. I’m not sure if this is a good thing — I’ll have to test it out as a daily driver — but it worked pretty quickly.

All of these upgrades doesn’t mean performance is turtle slow on the Z3 Play. Though the phone’s powered by a “midrange” Qualcomm Snapdragon 636 chip, it’s still 30 percent faster than the Z2 Play. It’s also got a reasonable 4GB of RAM, either 32GB or 64GB of storage (expandable via microSD card slot), and a 3,000 mAh battery. No headphone jack, though, so you’ll need to rely on a USB-C-to-3.5mm-jack dongle or go wireless.

Android the way it was meant to be

Motorola’s always done a good job keeping Android pretty clean and as close to stock Android as possible and the Z3 Play is no different. It’ll ship with Android 8.1 Oreo and be updated to Android P shortly after.

The only major tweak to the software is navigation bar located towards the bottom of the display. It looks like the iPhone X’s gesture bar, but works differently. Swipe left to return to the previous screen; tap to return to the home screen; and swipe right open the recent apps.

If you’re not into these gestures, you can always stick with the onscreen navigation buttons. The downside is you lose a bunch of vertical pixels to accommodate them.

Works with all Moto Mods

The Z3 Play works with all 14 existing Moto Mods. The variety of mods to choose from is diverse — there’s the tried and true speaker mod and battery mods, and some of the newer ones like the Alexa mod and 360 camera mod are kind of quirky and fun.

The company says of all the Moto Mod-compatible phones sold globally, there’s about a one-third attach rate for Moto Mods. With Z3 Play, Motorola says it wants to make Moto Mods more accessible, which is why it’s bundling two of its most popular ones with the phone.

In the U.S., there’ll be a bundle with the Z3 Play and a battery mod for $499. In other regions, a speaker mod will be bundled with the phone for the same price.

It’s not a bad deal since most people end up buying a battery pack for their phone, anyway.

For a midrange phone, the Z3 Play looks pretty decent. We’ll have to wait until we can review the phone to see Motorola’s emphasis on the experience was the right choice or not, but upon first impression, it appears to be a good value.

The Z3 Play will be available this summer at Sprint and U.S. Cellular. An unlocked version will be sold at Best Buy, Walmart, Target, Fry’s, B&H Photo, and on Amazon.com as a Prime Exclusive.