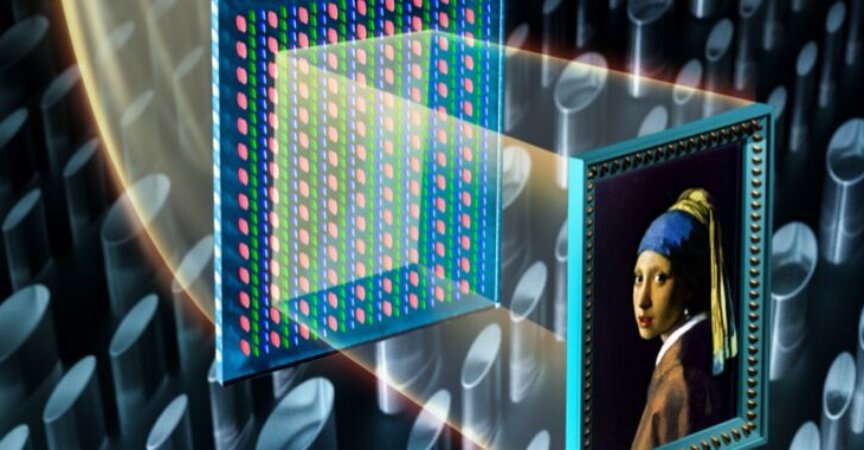 Scientists have fabricated tiny “nanopillars” capable of transmitting specific colors of light, at specific intensities, which hold promise for improved optical communication and anti-counterfeit measures for currency. For proof of concept, they decided to digitally reproduce Dutch master Johannes Vermeer’s famous painting Girl With a Pearl Earring—just painted in light instead of pigment. They discussed their work in a recent paper published in the journal Optica.

“The quality of the reproduction, capturing the subtle color gradations and shadow details, is simply remarkable,” said co-author Amit Agrawal , a researcher with the National Institute of Science and Technology (NIST). “This work quite elegantly bridges the fields of art and nanotechnology.”

Nature abounds with examples of structural color. The bright colors in butterfly wings don’t come from any pigment molecules but from how the wings are structured, for instance. The scales of chitin (a polysaccharide common to insects) are arranged like roof tiles. Essentially, they form a diffraction grating , except photonic crystals only produce certain colors, or wavelengths, of light while a diffraction grating will produce the entire spectrum, much like a prism

Scientists have sought to mimic nature with nanofabrication techniques capable of generating structural colors, just by tweaking the dimensions of nanostructures. However, the brightness of the colors such “metasurfaces” generate is fixed; they don’t allow for tuning the brightness to achieve the complex interplay of light and shadow known in the art world as “chiaroscuro .”

Nanopillars are a type of nanostructure with a unique shape, tapering from a bottom pillar into a pointed top. Group them into arrays and they are an excellent means of capturing light (up to 99 percent) with less material—making them a promising alternative for manufacturing solar panels. They can also be used to create antibacterial surfaces, much like the tiny, similarly shaped rods in a cicada’s wings can kill bacteria by rupturing their cell membranes.

Nanopillars can also be used to generate structural colors. For instance, scientists have previously illuminated nanopillar arrays with white light to produce specific colors (red, blue, and green light), simply by varying the sizes (widths) of the nanopillars. However, the authors note that while those arrays can produce vibrant colors, the brightness (or intensity) of the generated colors is fixed and cannot be “tuned.” Shifting levels of brightness are key to reproducing the chiaroscuro of an image. “By tuning the brightness of a color, the generated shadow rendering effect can make an image appear with a stronger space and stereo perception,” the authors wrote.

It’s possible to add liquid crystals and electrochromic polymers to metasurface arrays to control that brightness, but that control does not extend across the full visible spectral range. And the complicated electronic architectures required make it difficult to adapt such metasurfaces for practical applications.

The NIST team’s nanopillars address many of those issues, most notably the question of tunability. The team fabricated titanium dioxide nanopillars on glass slides, using an elliptical cross-section rather than a circular one so that the diameter wasn’t uniform but had a longer axis and shorter axis. By changing the alignment of the long axis with the polarization of incoming white light and pairing that with a special polarizing filter on the back of the glass slide, the team was able to tailor the intensity of the light transmitted by the nanopillars.

In principle, it works in much the same way as polarized sunglasses. The greater the rotation angle of the polarization, the greater the intensity of the transmitted light. By this means, the scientists were able to control both color and brightness across the visible spectrum of color.

Vermeer is a noted master of light and shadow, and his paintings are rich in chiaroscuro. So Girl With a Pearl Earring was a natural choice when the NIST team sought a good test candidate to see if their technique could digitally reproduce the painting with light. First, they made a digital copy of the painting, just 1 millimeter in length, and then used that information to design a matrix made up of millions of nanopillars. Groups of five nanopillars (one red, two green, two blue), oriented at the desired angles, formed pixels of the Vermeer. Finally, they shined white light through the matrix to produce a millimeter-sized reproduction of the original.

The results proved quite impressive, even capturing some of the texture of oil on canvas. “It can be observed that the girl wears a blue turban and gold jacket with a white collar underneath, which presents ultra-smooth brightness transitions, and the darker peripheral sides blend seamlessly with the black background,” the authors wrote. “The smooth color hue and brightness transitions allow the image to present an oil painting-like texture, elegantly bridging the gap between scientific results and art.”

These nanopillar metasurfaces could be used to add specific wavelengths of light in an optical fiber, the better to control the amount of information that fiber can carry. It could also be possible to use the technique to paint paper currency with complex colors that would be difficult to forge.