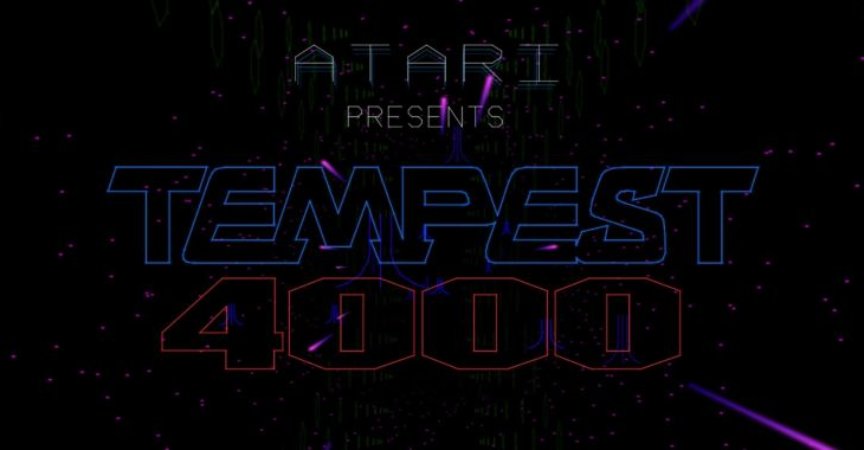 Ever since 1994’s Tempest 2000, British game developer Jeff Minter has been inextricably linked to Atari. Published by Atari for its Jaguar system, Tempest 2000 was easily among that notorious console’s best, and it combined the spirit of the original Tempest with power-ups, psychedelic designs, and twitchy, controller-friendly action (no trackball required!).

But that Atari link has grown sour in recent years, with Minter publicly decrying the current “company” (which he chidingly calls “Infogrames,” since that was the company’s name before it bought Atari’s rights) and paraphrasing their last legal threat in 2015 as follows: “Give us personal information about your finances or we will fuck you up.” The row was over TxK, the spiritual successor to Tempest 2000 that his development house, Llamasoft, launched on the PlayStation Vita in 2014. The following year, his attempts to bring that new “tube shooter” game to other platforms were met with legal threats .

“Attack me? They should have hired me,” Minter said to Ars in 2015. Someone among Atari’s ranks must have been paying attention.

Today, Tempest 4000 launches as an Atari-published game on a variety of platforms: $29.99 on Xbox One and PlayStation 4, and $19.99 on Windows PC. Our testing of the game reveals a product that is mechanically quite similar to TxK , with a few exceptions—so consider this a refresher on what’s so cool and weird about Minter’s baby. We also reached Minter and another Llamasoft dev via email to confirm what has changed, and we tested long enough to be able to warn PC players about which version they might choose to buy.

This week’s Tempest 4000 is above all else an ’80s-caliber test of laser-blasting reflexes. It plays (and looks) quite a bit like the original ’80s arcade Tempest , complete with wireframe and vector visuals, and it demands that you guide a small, laser-equipped ship across the top of a giant polygonal shape. Sometimes, this shape will be a perfect round tube, and other times, it will be a bendy, semi-flat sheet. But in every case, your ship glides across one edge, while low-poly critters, flowers, and other light-flashing entities creep toward you from the other. They’re all able to kill you either with a direct touch or by shooting their own lasers. Shoot these things to survive.

In each level, you start from scratch with zero special powers, and you get a limited amount of time to deal with an early wave of manageable foes before the play field explodes with activity. By then (hopefully) you will have picked up some of each level’s quickly moving power-ups, which let you do things like shoot more powerful weapons, acquire laser-shooting drones, and jump across the level. The latter power is significant, because without that jump, you must otherwise try oh-so-carefully to move past any foes that have successfully crawled onto your edge. (Again, if they touch you once, that’s a lost life.)

The result, like any arcade classic, is easy to sum up: move, react, blast, live, and have fun. In particular, the challenge forces players to find a careful, enthralling balance between blasting enemies, clearing a safe path, and getting into position to grab power-ups at the moment they can cross your path. It’s a divine gameplay pattern, nudged along by increasingly frenetic level and enemy challenges.

Llamasoft helps matters along by remaining trapped in a weird mix of ’80s nostalgia and ’90s design, which means the whole affair looks and sounds like Flynn’s Arcade overrun by a psychedelic EDM party. Rainbow patterns swirl over levels, especially when the new “beauty” power-up flashes and lets you rapidly clear out foes in a pinch, while between-stage bonus levels, which force you to aim through a moving target for points, make the whole screen melt like an early ’90s screensaver.

Minter has confirmed to Ars Technica that the game ships with the entire Tempest 2000 soundtrack—and we mean entire, as the game actually had two completely bespoke soundtracks. Tempest 4000 includes all songs from both the CD-ROM version (which was ported to everything from MS-DOS to the PlayStation) and the Jaguar cartridge, along with “some extra MOD tracks that were dropped from the cartridge release due to space constraints,” Minter tells Ars. (As of press time, if you buy the PC version, you can access this complete soundtrack by navigating to its folder and grabbing ADPCM-codec WAV files. No other soundtrack or DLC purchase is required.)

When pressed about similarities of Tempest 4000 to TxK, Minter confirmed particular efforts to update the game for current-gen hardware, including a complete shift to new geometry for many of the game’s elements. This was done for the sake of higher-resolution modes on newer consoles but also because of aspirations to launch the game for virtual reality platforms, as Llamasoft did for its solid game Polybius on PlayStation VR.

Llamasoft did not indicate if, when, or on what platforms a VR version of Tempest 4000 might launch, but both Minter and Llamasoft’s Ivan “Giles” Zorzin complained about how work on the game was sidetracked by a requirement to localize the game in six languages. “If there would have been NOT any localization AT ALL, I probably would have done nine versions of T4K including VR,” Zorzin writes, while Minter adds, “As you may be aware, localization can be a complete ballache, especially in the case of UI, which must be made to intelligently adapt to strings of different sizes for the different languages.”

That complaint aside, Minter points to refinements throughout the game’s engine to emphasize “aggression” and make the game “a bit faster and more interesting.” New enemies and power-ups appear, as well, and, while I didn’t have a Vita version handy to compare to, I agree with Minter’s call about the pacing feeling a little wilder—and thus driving my “one more quarter” instinct as I gleefully died-and-retried for hours of Tempest 4000 .

But there’s a catch, and that came from my testing happening largely on PC.

Tempest 4000 has clearly been built with consoles in mind, as its menus include zero customization options for PC players. You cannot reassign keyboard or gamepad functions. You cannot enable a d-pad on a controller (though using its arrow-key equivalent on a keyboard feels quite unoptimized, compared to the trackpad-like analog drag of an Xbox One joystick). And you cannot change a single visual option, including resolution, windowed/fullscreen/borderless modes, or v-sync.

When pressed on this lack of options, Zorzin points to custom wrappers that PC players can install for the sake of resolutions and button remapping, then adds, “I would never turn v-sync off.” This might have something to do with the game’s target lock for 60 frames per second, but that brings up another unfortunate issue at launch: there are issues with higher frame rate monitors. Attempts to test Tempest 4000 on a 144Hz monitor, both with variable refresh rate (VRR) enabled and disabled, led to the game clocking at a higher speed , as opposed to a higher frame rate with the same game timings.

Thus, everything in the game, from you to your enemies, moves way, way faster on a higher-refresh monitor. Think of this bug as a hidden “ultra-hard” mode, if you want, but I found it darn near unplayable. (In a follow-up email, Zorzin confirmed this issue “should not be too complex to fix.”)

In better news, at least, when playing the game exactly as intended—on a 60Hz screen, with a gamepad in hand, utilizing 16:9 fullscreen mode—the whole thing runs beautifully, particularly at 4K. Zorzin points out how much work went into the game’s “pure vector” typeface, for example, which he says he built because he hated every vector typeface he’d found while working on the current-gen port. This led him to the programmer’s mentality of, as he puts it, “do it your own.” The game flashes oddball words and phrases in the course of standard gameplay, and their letters all rotate and shatter in native resolution, so the effort is honestly easy to appreciate.

I point this detail out because the PC build’s issues run headlong into the clear love Llamasoft put into making the best danged tube-shooter game of all time. Tempest 4000 is not only a blast, but also an arcade-action romp that delivers on a singular refine-a-classic vision, right up there with the likes of Geometry Wars and Resogun . Until Atari announces anything in the way of patch or update plans for the game, however, tread cautiously if PC is your lead platform.