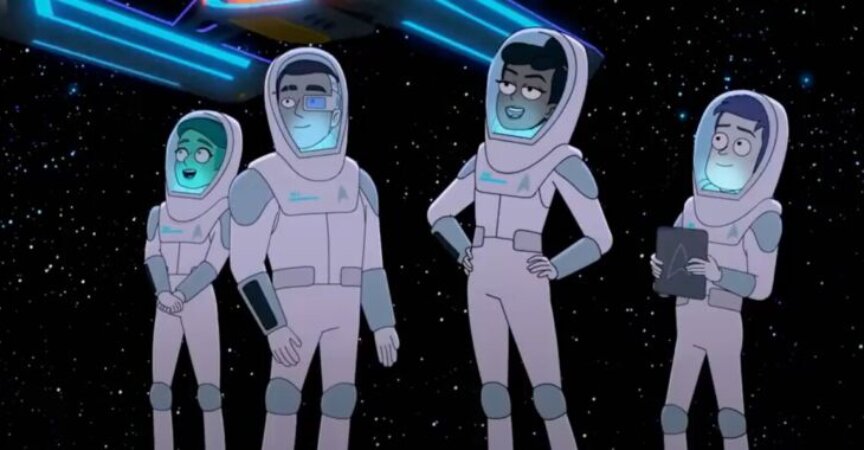 The animated series Star Trek: Lower Decks was one of our favorite TV shows of 2020, so we’ve been looking forward to its second season. We won’t have long to wait. S2 drops next month on Paramount+, and the studio debuted its first trailer during the Star Trek Universe panel at [email protected] 2021. That same panel also gave us our first teaser for another new animated series, Star Trek: Prodigy .

(Spoilers for S1 of Star Trek: Lower Decks below.)

As we’ve reported previously, this is the first animated Star Trek series since the Emmy-award-winning Star Trek: The Animated Series (TAS), which ran from 1973 to 1974. Lower Decks is part of a five-year overall deal that Star Trek: Discovery co-creator and showrunner Alex Kurtzman signed with CBS to expand the franchise. Kurtzman tapped Rick and Morty head writer Mike McMahan to spearhead the project. Chronologically, the show takes place after the events of the 2002 film Star Trek: Nemesis; the name is an homage to an episode of Star Trek: The Next Generation (TNG ).

The first season, which premiered last August, introduced us to the support crew serving on one of Starfleet’s least important ships, the USS Cerritos, in 2380: Ensigns Beckett Mariner (Tawny Newsome), Brad Boimler (Jack Quaid), Sam Rutherford (Eugene Cordero), and D’Vana Tendi (Noël Wells). Mariner adopts a lax approach to following the rules, which contrasts sharply with the attitude of Boimler, who is a stickler for the rules and dreams of being captain of his own starship one day. Rutherford sports a cyborg implant and bears some resemblance to Geordi La Forge from TNG , while Tendi is an eager-to-please new addition to the medical bay. As Mariner says, “We’re not really elite. We’re more the cool, scrappy underdogs.”

Their madcap S1 adventures included the crew dealing with an alien viral outbreak that turns crew members into raging zombies; Boimler getting slimed by an alien farm animal; Tendi creating a pet dog despite her limited knowledge of canine anatomy; and Mariner getting drunk with a Klingon general who proceeds to steal the shuttlecraft.

Who could forget Boimler’s briefly homicidal holographic assistant Badgey? And we could all benefit from “The Boimler effect,” a mandate that encourages scheduling in “buffer time” so crew members can complete tasks at their own leisurely pace. We also got guest appearances by Riker (Jonathan Frakes), Deanna Troi (Marina Sirtis), and everyone’s favorite extra-dimensional being, Q (John de Lancie).

In her review for Ars Technica, Kate Cox described the series as “comfort food with a comic twist.” It included sufficient winks and nods for hardcore Trekkies without veering too far into over-indulgence. “In a universe of lofty goals and monologued moral exhortations, Lower Decks primarily begs us to check ourselves before (and after) we wreck ourselves and to take the opportunities to screw around, have fun, and enjoy the absurdities of space when they are presented,” she concluded.

So what can we expect from S2’s ten episodes? McMahon has said the season will combine standalone episodes with season-long character arcs, including one involving Mariner and Tendi. The season will not undo any of the events of S1, which saw the demise of security chief Lieutenant Shaxs (Fred Tatasciore), who sacrificed himself to save Rutherford. Rutherford will be struggling with some lingering memory issues as a result of those events, and Boimler will now be working on the USSTitan. Meanwhile, Mariner and Captain Carol Freeman (Dawnn Lewis)—revealed to be her mother last season—will be learning how to work together. We’ll also be seeing more of Riker as captain of the Titan , plus some additional cameos by other characters from past Star Trek series.

Star Trek: Prodigy will be a very different beast, aimed at a younger audience than the usual Star Trek fare. It’s set in 2383 and takes place after the events of Star Trek: Voyager . In fact, Kate Mulgrew will return to voice Captain Kathryn Janeway—or rather, her appearance as the ship’s Emergency Training Hologram. The show is expected to be different from Lower Decks in both tone and visual style, and this first teaser is certainly in keeping with that idea. Per the official premise:

Star Trek: Prodigy  is the first Star Trek series aimed at younger audiences and will follow a motley crew of young aliens who must figure out how to work together while navigating a greater galaxy, in search for a better future. These six young outcasts know nothing about the ship they have commandeered—a first in the history of the Star Trek Franchise—but over the course of their adventures together, they will each be introduced to Starfleet and the ideals it represents.

The main cast features Brett Gray as Dal, a 17-year-old “maverick”; Rylee Alazraqui as Rok-Tahk, an eight-year-old Brikar who loves animals; Angus Imrie as Zero, a non corporeal energy-based Medusan; Jason Mantzoukas as Jankom Pong, a Tellarite who enjoys playing devil’s advocate; Ella Purnell as Gwyn, a Vau N’Akat who grew up on a mining planet; and Dee Bradley Baker as Murf, an “indestructible blob” who likes to chow down on ship parts. In addition, guest star Billy Campbell will be back as rogue freighter captain Thaius Okona from TNG .

Star Trek: Lower Decks S2 will debut on Paramount+ on August 12, 2021, and the show has already been renewed for a third season. Star Trek: Prodigy is expected to land later this year with ten episodes on Paramount+. After that, it will air on Nickelodeon.