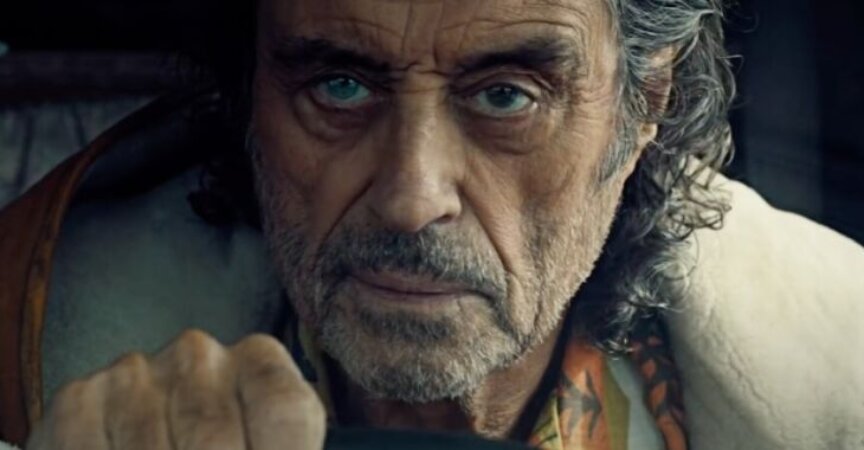 Shadow Moon flees to a small town in Wisconsin to escape the ongoing war between the Old Gods and the New Gods in the full trailer for the upcoming third season of American Gods.  The visually striking (if narratively uneven) Starz series is adapted from the novel of the same name by Neil Gaiman.

(Some spoilers for first two seasons below.)

In season one, recently released convict Shadow Moon (Ricky Whittle) falls in with the mysterious Mr. Wednesday (Ian McShane) as his bodyguard after losing his wife, Laura (Emily Browning). But Mr. Wednesday is not who he seems. He’s actually the ancient Norse god Odin, seeking to rally all the remaining Old Gods, who are slowly dying off from people’s lack of belief. Their mission: beat back the encroaching influence of all the New Gods so they can survive. The New Gods are led by Mr. World (usually played by Crispin Glover, although he has many incarnations), i.e., globalization, and include Technical Boy (Bruce Langley)—reincarnated as Quantum Boy in S2—and Media (Gillian Anderson), reimagined as New Media (Kahyun Kim) in S2 when Anderson left the series.

The first season covered roughly the first third of Gaiman’s novel, culminating in a gathering of the gods at the home of the goddess Easter (Kristin Chenoweth), who inflicted widespread drought on Earth as Mr. Wednesday revealed his true identity. S2 largely covered the second third of the book, as the battle between the Old Gods and the New Gods heated up in earnest, with casualties on both sides.

Frankly, the second season of American Gods was considerably weaker than the first—primarily due to a major showrunner shake-up and behind-the-scenes drama—although the seventh episode, “Treasure of the Sun” was among the series’ best (it’s one of Gaiman’s favorites, too ). It gave us more of Mad Sweeney’s (Pablo Schreiber) backstory and ended with him being speared on Mr.  Wednesday’s reforged sword, Gungnir.

But before he died, the wily leprechaun magicked the sword into his Otherworld hoard where Wednesday couldn’t retrieve it. Laura, who had bonded with Sweeney, swore to kill Mr. Wednesday in revenge, and took Sweeney’s body with her when she left. Shadow ultimately discovers he is actually Mr. Wednesday’s son, and a demigod, and ends the season by taking a bus headed north, with a mysterious new identity to shield him from the machinations of the New Gods.

Gaiman confirmed at the 2018 New York Comic Con that S3 would cover the last third of the book, although he hinted last year of a planned fourth season. So it’s possible the ten-episode third season might not wrap up the book’s conclusion—or perhaps Gaiman has ideas for moving beyond the book with his new showrunner, Charles “Chic” Eglee (The Walking Dead ).  Per the official S3 premise:

American Gods is the epic story of an inevitable war building between the Old Gods of mythology and our New Gods of technology. Ricky Whittle stars as ex-con Shadow Moon, a man pulled into the service of the mysterious Mr. Wednesday, played by Ian McShane—only to discover that not only is his charismatic but un-trustable boss actually the Norse All-Father god Odin, he’s also…Shadow’s father. In S3, Shadow angrily pushes this apparent destiny away, and settles in the idyllic snowy town of Lakeside, Wisconsin to make his own path, guided by the gods of his black ancestors, the Orishas. But he’ll soon discover that this town’s still waters run deep, and dark, and bloody, and that you don’t get to simply reject being a god. The only choice—and a choice you have to make—is what kind of god you’re going to be.

There’s been some shakeups in the casting this season. Obviously Mad Sweeney is no more, but Iwan Rheon (best known as the sadistic Ramsey Bolton on Game of Thrones) will play another leprechaun who will likely join up with Laura, based on the new trailer. Orlando Jones, who played Mr. Nancy, aka the Ghanian trickster god Anansi, was fiercely outspoken about his displeasure at being fired from the show, accusing Eglee of cutting out his character because Eglee felt it was the “wrong message for America.” (A series spokesman denied the allegation and said the casting change was due to Mr. Nancy not being featured in the portion of the novel being covered by S3.)

Mousa Kraish, who played the fiery-eyed gay Jinn, is also not returning for S3, although Omid Abtahi, who played the Jinn’s lover, Salim, remains a series regular. Other new cast members include Blythe Danner as Demeter, Greek goddess of the harvest, who has a past romantic history with Wednesday; Herizen Guardiola as Oshun, Yoruban goddess of love and fertility; Marilyn Manson as a former “berserker,” now lead singer with a Viking death metal band; Julia Sweeney as the self-appointed mayor of Lakeside; Eric Johnson as Lakeside’s chief of police; Lela Loren as a local Lakeside reporter; Dominique Jackson as a female incarnation of Mr. World; and Danny Trejo as yet another incarnation of Mr. Word. (Globalization has many faces.)