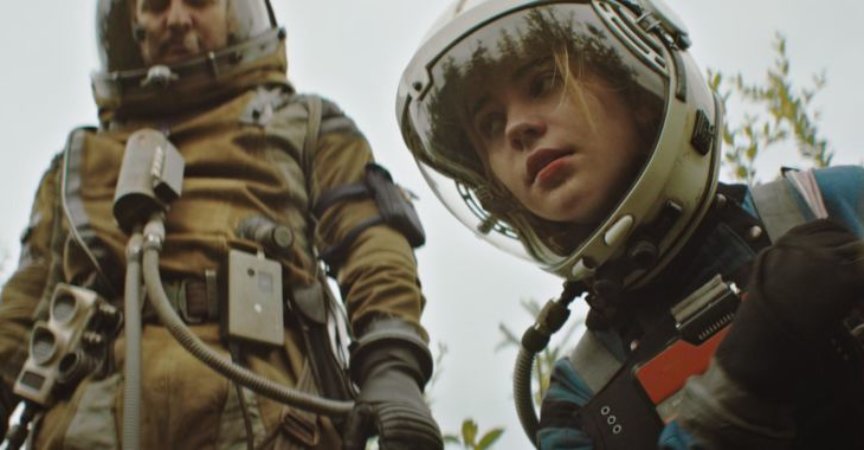 AUSTIN, Texas—Make no mistake, South by Southwest conference film darling Prospect takes place within a giant, intergalactic reality. Even lower- to middle-class adventurers like our heroes, Cee (Sophie Thatcher) and Damon (Jay Duplass), have a spacecraft and mostly functional equipment. And when this just-getting-by father and daughter duo takes an unexpected crash/detour that happens to land on a resource-rich planet littered with aurelacs (a valuable stone found inside some slimy pod that must be handled with care or “kaboom!”), Cee recognizes this as an opportunity.

“$10,000?” she retorts after dad ballparks the first gem recovered. “That’s enough to cover the loan… and the pod lease?”

Their ship has been built with Kubrick-like attention for analog detail, with cheap-ish CRT displays punctuated by handwritten notes. The planet they’re now on feels dream-like, a lush swampy Dagobah with a near-constant twinkle in the atmosphere. Nothing could happen from here and Prospect  would still be worth watching for an hour-and-change of ambience and aesthetic alone. But as its initial 10 minutes show, this gorgeous-looking sci-fi flick has big subjects to match its style: intergalactic travel regulations, tiers of consumer goods, interplanetary trade standards.

Yet Star Wars this is not. Prospect instead succeeds by tossing much of its thought-out big picture away and relegating the rest to background. This is a small story set in a galaxy far, far away. And, even if it meanders a bit at times, this narrow focus keeps Prospect from ever losing its propulsive tension or engaging picture.

A different kind of one-horse town

As you might guess, Cee and Damon do not stop after stumbling upon a single patch of aurelacs. Dad sees much more potential, including millions in possible profit given the stash, he insists. “We will never ever have a chance like this again,” he says.

But some remote, resource-rich planet with the potential for a futuristic gold rush can’t stay remote for long. Cee and Damon quickly discover they aren’t the only team on the ground with prospecting ambitions. (Ah, I see what they did there.) And opting to embrace this detour rather than getting back to orbit leads the pair into a simple saga with two motivations—first, grab the aurelacs and get out; second, stay alive while doing it.

Prospect takes on a distinct Western vibe from here, becoming an adventure tale filled with colorful characters, otherworldly dialects, and ample close encounters. Our heroes gain a verbose companion named Ezra (Pedro Pascal, who,Varietycorrectly recognized, sounds straight out of Deadwood ); they encounter packs of others who want to hold them captive and procreate or simply want to force them into aurelac-mining for others.

Don’t expect high-budget lightsaber battles or cutting-edge VFX aliens interspersed throughout that story, however. Prospect thrives more as a character-study due to the strength of its performances. In particular, Thatcher as Cee makes you feel each step of her transition from book-reading, punk-listening teen to cunning, hardened survivor who’s capable of holding a rifle or stitching up a wound. She often becomes the most compelling thing in the film, much like other recent genre offerings succeeding on the strength of a young heroine (Thelma, Meerkat Moonship ).

“We maybe were a bit naive in the conception of this, putting the entire film on the shoulders of a teenage girl,” Chris Caldwell, Prospect co-writer/director, tells Ars. “But she killed it, and in many cases she saved our ass.”

“In another movie, you might get 12 takes, but we’re in helmets that are hard to breathe in—you get four takes,” adds Zeek Earl, co-writer/director and cinematographer. “She nailed it.”

Style via the Seattle-maker scene

When Prospect started off as a humble short film Kickstarter back in 2012, the team stated its motivations clearly: “Our goal is to capture a piece of what makes 2001, Blade Runner, and the original Star Wars so awesome: texture,” the pitch read. “Prospect will be real and tactile, building a robust world with custom props and costumes, rather than digital effects.” That ethos earned them a short film (which debuted at SXSW 2014), and that short film eventually earned them a full-length film (which debuted at this most recent SXSW).

“The theme was throwing stuff away,” Earl says of Prospect ‘s world-building. “You can’t get fixated on what’s going to make it into the movie. We’ve got beautiful stuff—we did a cigarette ad for a grimey dude’s T-shirt, and I love it. But it didn’t make it into the movie… We started with a Wikipedia of sorts, however, so if there was a character even only seen briefly, we figured out their backstory, home planet, cultural connections. We totally have ideas for how the economics work or how the government works for places not even mentioned.”

“We both grew up on the Star Wars Visual Encyclopedia;  it’s about creating a taxonomy of world-building,” Caldwell adds. “We were chasing that feeling of total immersion in a world. When you’re building something from scratch, something that’s totally imagined, you don’t get the benefit of all the detail built into real-world objects.”

The project’s newly found buzz—that same Variety review said “the standalone Star Warsmovies should feel like [this] ;”Slashfilm called it the best indie sci-fi since Moon— validates this “good story shrinks in the wash” approach. And Caldwell and Earl did a remarkable job adding to that texture visually. Everything from Cee and Damon’s uniforms to the various encampments they encounter make for wallpaper-worthy compositions, yet the cinematography never gets flashy enough to overshadow the action.

This likely stems from the duo’s insistence on an extreme DIY approach. Everything appearing on-screen happens through practical effects, and all props came from the hands of their fellow Seattle-makers.

“It was a challenge, but it was the most fun thing to do,” Earl said. “We had seven months, and my dream was to have a warehouse. We just got a shitty box and filled it with passionate people who wanted to make a world—that was absolutely thrilling. And every object was original; we’re not on Earth so, we have to make everything.”

“On the production design end of things, we had to build up our own shop,” Caldwell explains. “We pulled from a majority of people who never worked on a movie before—they had worked on everything from cosplay to industrial design to carpentry. We’re pulling people from all kinds of backgrounds, and that diversity of perspective shows in how things materialized. We had a big focus on utility in design in the end, and having people used to building products instead of props really informed that.”

It’s easy to feel like all sci-fi these days centers on big, heady concepts: time-travel, resource-stricken dystopias, artificial intelligence, and so on. Some of it is done well, and others get lost straight to Netflix. But that critical mass has created certain expectations for any sci-fi movie released in 2018; Prospect succeeds by nodding to all that came before, blazing a different trail.

Prospect continues to play the festival circuit with no VOD or wide-release announcements available at this time. The most up-to-date screening information will likely be found on the film’s Facebook page.