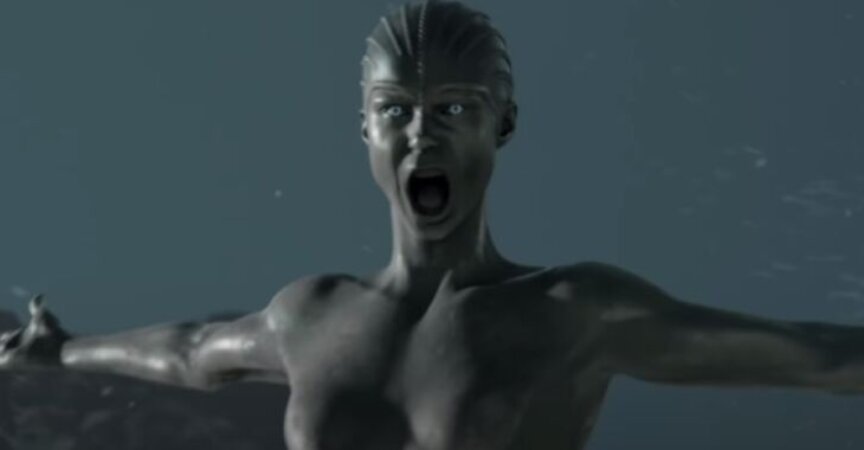 A pair of androids struggle to raise human children on a hostile planet in Raised by Wolves , the new sci-fi series that just concluded its first season on HBO Max. In this era of bankable franchises, reboots, and adaptations, it was refreshing to see something so original and visionary hit the small screen, and we had high hopes for the series.

That hope was sadly misplaced. Granted, in its earlier episodes, Raised by Wolves is moody, atmospheric, strangely disquieting, and thought-provoking, with gorgeous cinematography. So it’s especially maddening that the show squanders all that considerable promise with a clunky, incoherent finale featuring a hackneyed, ham-fisted, totally unnecessary twist that left us seriously questioning whether we even want to tune in for a second season.

(Spoilers below, but all major reveals about the finale—because WTAF?—are below the gallery and we’ll give a heads up when we get there.)

As we reported previously, the series was created by Aaron Guzikowski, who also penned the script for the 2013 thriller Prisoners. The ten-episode series was initially a straight-to-series order for TNT but moved to HBO Max last October. Executive Producer Ridley Scott (Blade Runner, Alien, etc., etc.) directed the first two episodes, making this his US TV directorial debut. Those two episodes are terrific, but the series becomes increasingly “Ridley-ized” for the worse as things progress, veering directly into Prometheus territory in the finale.

The story involves two androids serving as Mother (Amanda Collin) and Father (Abubakar Salim) figures on a strange virgin planet, Kepler 22b (an actual observed extrasolar planet), after Earth has been destroyed by the outbreak of a religious war. They are programmed to incubate, birth, and raise human children to rebuild the population and set up an atheist civilization to keep the human race from going extinct. It’s a harsh, dangerous environment, even for androids, and only one of their original six children survives: Campion (Winta McGrath).

Then the remnants of an extreme religious sect from Earth, the Mithraic, who worship Sol, find their way to the same planet aboard a spaceship, or ark, called Heaven . The reconnaissance team tries to abduct Campion and kill Mother. That’s when we discover that Mother has special abilities: she’s actually a reprogrammed weaponized android called The Necromancer, who once slaughtered atheists back on Earth. Now her deadly sonic screams—which can disintegrate humans in seconds—are turned on the Mithraic, and she crashes their ark onto the planet. Her new maternal instincts lead her to bring the surviving Mithraic children into her fold.

Complicating matters further: among the Mithraic survivors are an atheist soldier, Marcus (nee Caleb, played by Travis Fimmel) and his partner, Sue (nee Mary, played by Niamh Algar), who infiltrated the sect to escape a doomed Earth. They are determined to rescue their (technically adopted) son Paul (Felix Jamieson) from Mother and Father, against the orders of the Mithraic leader, Ambrose (Awissi Lakou). The various conflicts inevitably escalate, and the planet itself has its own mysterious secrets and hidden dangers, with the fate of the human race lying in the balance.

(WARNING: Major spoilers for the finale below, because we need to vent our inchoate rage. Do not read further if you haven’t yet watched the episode.)

Danish actress Amanda Collin gives a truly extraordinary performance as Mother, and her angular, androgynous physique (augmented by makeup and wardrobe) is visually very striking. The jaw-dropping scene where she first lets loose with her sonic screams to protect her child from the Mithraic, and transforms into The Necromancer, is sci-fi television at its finest. Much of the season centers on her journey of self-discovery and how the revelations about her true nature and mission impact her relationship with both Father and Campion. The backstory of who reprogrammed her—a former Mithraic scientist turned atheist named Campion Sturges (Cosmo Jarvis), who then fell in love with her, just like Pygmalion —is fascinating; there just wasn’t enough of it.

I was even willing to cut the show some slack when Mother ends up having virtual sex with a VR Sturges and winds up inexplicably pregnant. She tells Father she “downloaded” the required information to build a new life form, which was the first warning sign that things were about to go seriously sideways with the plot. What kind of life form is she gestating so rapidly? There were some intriguing possibilities: something half-human, half android perhaps?

And then, it comes time to deliver, and Mother literally vomits up a creepy snake with suckers that—I kid you not—can fly with no obvious means of generating lift. (Apart from everything else, it’s just bad creature design from a biophysics standpoint.) This is a huge blow to Mother, who realizes she did not download instructions from Sturges, but rather has been infected by some alien sperm while she was getting it on in the VR simulation. Or something. It’s honestly not entirely clear. She and Father try to destroy the creature—which will hanker for human blood and threaten their children as it grows—in a suicide mission but somehow the darn thing foils that plan and is released into the wild.

I admit, I uttered some especially salty observations once the credits rolled.

I admit, I uttered some especially salty observations once the credits rolled.

Ars Technica Senior Technology Editor Lee Hutchinson had the exact same reaction to the finale. “I can forgive a lot for an interesting story,” he said. “I’m willing to overlook minor stuff like, how the Heaven ark crashed a mile from the family’s camp, and yet somehow on foot there’s three days’ worth of desert in between the two locations. But a flying alien sucker snake? WTF?” Even that, we might have forgiven, if the finale had given us any answers or insight into the planet’s central mystery that the show has been hinting at for ten episodes. Instead, it went for a jarring, over-the-top ploy that simply wasn’t sufficient payoff for the viewer, and clashed mightily with the original set-up.

Scott’s fingerprints are all over Raised by Wolves, right down to the central mythology—or at least what little we learn of it. “This is a take on the same core story he’s been trying to tell in his last couple of movies—what is life? what does being alive mean?—but without all the contractually obligated Alien baggage,” Lee said. “David from Prometheus would be right at home hanging out with Mother and Father, and the bits with Marcus/Caleb (the atheist-turned-high-priest) felt Gladiator -esque. And the ‘alien bursts out from the host’ bit was too on the nose, unnecessary, and dumb.”

The newly birthed flying snake even looks like the snakelike creatures from Prometheus, raising questions about whether the show will devolve (like the planet’s early humans) into just another take on the Alien franchise mythology. Also: Lee points out that flying sex snakes are a featured card in Cards Against Humanity, and “now I have a mental image of exactly what it means.”

Raised by Wolves has already been renewed for a second season, and apparently the flying alien sucker snake (FASS)—which had rapidly grown to an alarming size in the final scene— is going to be a major part of the overall narrative arc for S2. Le sigh . Meanwhile the ultimate fates of Mother and Father remain ambiguous; since Collin’s Mother was hands-down the most interesting character, that doesn’t bode well for S2. Guzikowski and Scott clearly feel they have a lot more story to tell about this fictional world. The question is, will frustrated viewers tune in?

Raised by Wolves is streaming on HBO Max.