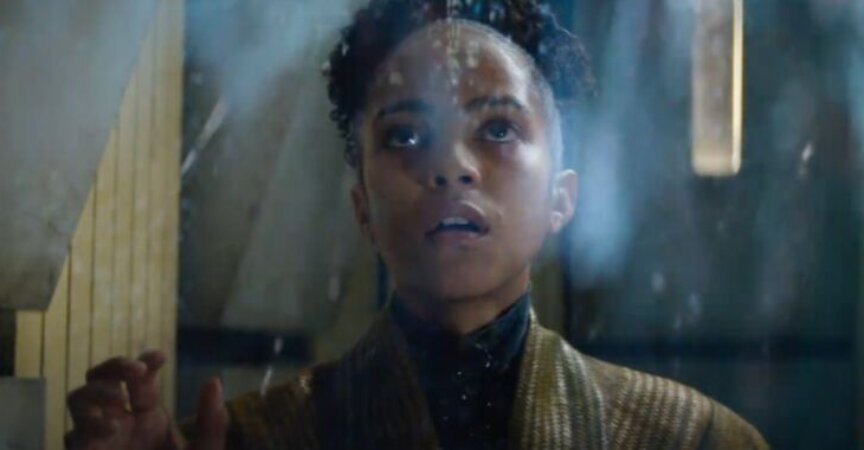 Isaac Asimov’s hugely influential Foundation series of science fiction novels is notoriously difficult to adapt to the screen. The author himself admitted that he wrote strictly for the printed page, and he always refused invitations to adapt his work for film or TV. But Asimov was more than happy to let others adapt his work to a new medium, and he was wise enough to expect that there would—and should—be significant departures from the print version.

That’s just what showrunner David S. Goyer (Dark Knight trilogy, Da Vinci’s Demons) has done with Foundation , Apple TV+’s visually stunning, eminently bingeable new series. Goyer describes it as more of a remix than a direct adaptation, and to my taste, it is a smashing success in storytelling. This series respects Asimov’s sweeping visionary ideas without lapsing into slavish reverence and over-pontification. That said, how much you like Goyer’s vision might depend on how much of a stickler you are about remaining faithful to the source material.

(Some spoilers below, but no major reveals.)

The fundamental narrative arc of the series remains intact. It’s a story that takes place across multiple planets over 1,000 years, with a huge cast of characters. Mathematician Hari Seldon (Jared Harris, Chernobyl, Carnival Row ) has developed a controversial theory of “psychohistory” that essentially applies math to sociology to make predictions about the future of the Galactic Empire, which rules every living person in the Milky Way. Seldon’s calculations predict the fall of the empire, ushering in a Dark Ages that will last 30,000 years, after which a second empire will emerge.

The collapse of the empire is inevitable, but Seldon has a plan to reduce the Dark Ages to a mere 1,000 years through the establishment of a Foundation to preserve all human knowledge so that civilization need not rebuild itself entirely from scratch. He is aided by his adoptive son and right-hand man, Raych Foss (Alfred Enoch, who played Dean Thomas in the Harry Potter franchise) and his new protege, Gaal Dornick (Lou Llobell, Voyagers ), a math prodigy who travels to the capital to work with Seldon.

Seldon’s predictions make him a dangerous traitor in the eyes of the empire’s rulers. As he himself notes, those in power fear and despise change, and yet change is constant—and inevitable. Instead of executing him and creating a martyr, the rulers exile Seldon to the remote planet of Terminus at the edge of the galaxy, along with the members of the new Foundation, where they begin compiling the Encyclopedia Galactica.

Eventually, there is a threat from a neighboring outer planet, ultimately resolved by the warden of Terminus, Salvor Hardin (Leah Harvey, Fighting with my Family ). And the Foundation members learn that Seldon’s plan was far more ambitious and complex than they realized. He told them just enough to set events in motion, since the tenets of psychohistory include an uncertainty principle of sociology, whereby if the collective population learns too much about its predicted fateful actions, those actions will soon become unpredictable. The clash between Seldon and the empire has often been described as a thousand-year game of chess, but there’s an element of rolling the dice and trusting in probabilities for the long game as well.

Perhaps the biggest change from the books is the replacement of the Empire’s ruling committee with a trio of clones called the Cleons. Brother Day (Lee Pace, Halt and Catch Fire, Pushing Daisies) is the primary ruler, with Brother Dusk (Terrance Mann, Sense8 ) serving in an advisory/legacy role. Meanwhile, Brother Dawn (played as a child by Cooper Carter and as a teenager by Cassian Bilton) is being groomed to take over as the new Brother Day. This gives more of a human face to the rulers, with complex emotions and interpersonal relationships, and all the actors are perfectly cast. I personally would watch Lee Pace read the phone book, and he has much meatier fare to work with here. Technically, they are all perfect incarnations of the same man, at different ages, and this is both the source of their strength as a team and of their conflicts. (Dusk has gained valuable wisdom, if the younger, strong-willed Day could bring himself to listen.)

We knew from the trailers that Salvor Hardin, warden of Terminus, had been gender-swapped, but the character has also been completely reimagined. The Salvor of the books is a shrewd politician (the latest in a long line) who deftly navigates a fraught political environment as the Foundation plants roots on Terminus. In the series, Salvor is a young woman who is still figuring out who she is and what role she’s meant to play in Seldon’s great plan. She shares many of the same traits as Book Salvor, but they are not yet fully developed. She also has a love interest in intergalactic space junker Hugo Krast (Daniel MacPherson, A Wrinkle in Time ), and a secret connection in the grand scheme of things that we shall refrain from revealing here.

Asimov’s original trilogy was (to my college self) an enjoyably brisk read, even if the prose got a bit dry and cerebral at times. Goyer has preserved that same tight pacing in the TV series, deftly weaving in character backstories to flesh them out, setting up relationships and the inevitable conflicts between those characters, and inventing some pretty big dramatic moments out of whole cloth to keep the story humming along and viewers hooked. The story jumps between settings and time periods quite a lot, but the writers have done an excellent job sign-posting those jumps, especially in the earlier episodes, to ensure viewers are sufficiently oriented to follow along. (No need for elaborate timeline charts here, as with The Witcher and Dark, although that may change with subsequent seasons.)

The actors all deliver strong, powerful performances from the aforementioned leads on down, and the cinematography and costume and production design are exceptional. Apple TV+ is deeply invested in this series, and it shows. If I had one tiny quibble, it would be that Goyer had so much ground to cover to set up this first season that the big ideas sometimes feel more ornamental than central. I’d love to see the ensuing seasons (assuming they transpire) take a few more breaths here and there to bring those elements front and center more often. I’m confident this writing team could do so without bogging down everything else that works so well.

In short, this is a terrific first ten episodes—Goyer envisions some 80 episodes, should Apple TV+ give him the chance—with no maddening cliffhanger. The finale resolves several plot lines and sets up a few others, leaving viewers both satisfied and eager for more. I think Asimov himself would be pleased with Foundation , particularly since his daughter Robyn is an executive producer on the series and signed off on Goyer’s vision.

The first two episodes of Foundation are now available for streaming on Apple TV+. New episodes will drop every Friday until the S1 finale on November 19, 2021.