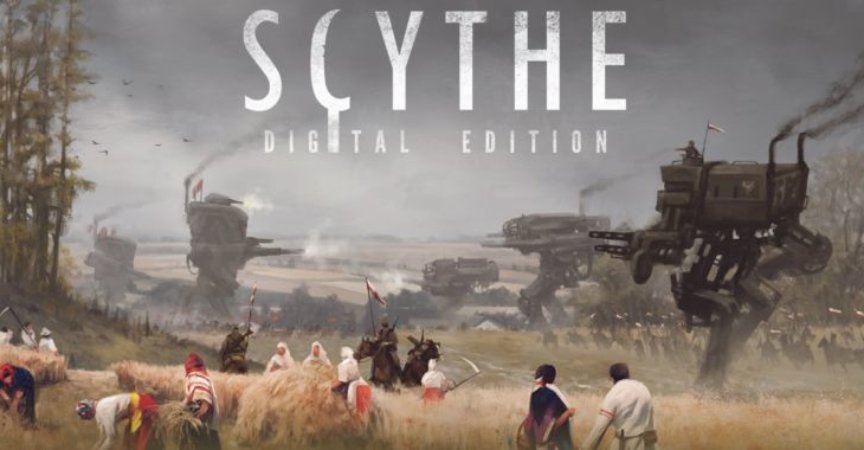 
Scythe is a heavy German-style board game that combines worker placement, area control, resource management, a little combat, and a point salad scoring with a setup so ornate that Alice Waters wanted to put it on her menu (read our original review of the game to see for yourself.) Scythe  has been among the top-rated games on BoardGameGeek since its 2016 release thanks to an extremely well-balanced design, very little randomness, and the use of many different mechanics in a single game. But it comes with a steep learning curve—both for rules and strategy—which makes the game ideal for a digital adaptation.

Asmodee Digital, which has established itself as the premier developer for high-end ports of board games, has just released its version of Scythe: Digital Edition to Steam (for both Mac and Windows), and it is unsurprisingly superb. Scythe  can easily take two-plus hours on tableto, but it’s now accessible to more players through an excellent tutorial and a clever UI that keeps the screen clear while ensuring that key information is available to players.

That’s important because Scythe requires you to track a tremendous number of things: you’re producing and spending four different resources, collecting three forms of currency (gold, power, and popularity), and trying to achieve six out of about a dozen possible objectives (such as getting to eight workers, building all four buildings, or reaching 16 power within a turn). The digital Scythe handles all of this accounting for you, keeping track of what you can do, what you still have left to do, and oh by the way did you forget you were entitled to this? There’s nothing intuitive at all about the rules of Scythe , and it’s the kind of game that will likely keep even experienced players peeking at the rule book. The app handles all of that quite smoothly, offering mouse-over prompts so you know what each option does and a series of questions and confirmation dialogs for each set of actions you can take.

In Scythe , you get to choose one action per turn, though if you have the right resources, you may get to take an associated second action. With rare exceptions, you can’t use the same action on consecutive turns, but you can plan your actions out several turns in advance as you build out your area of the map to achieve certain objectives. There’s limited interaction with other players—combat exists, and one objective is to win two battles, but fighting is neither necessary to win the game nor terribly satisfying—so long-term strategy is both possible and essential. As the game progresses, if you’ve planned well, your actions become more powerful, so you will produce more resources at one time or gain more bonuses. You might take half the game to achieve your first objective (shown as a star on your player icon in the lower right of the screen) but then find yourself hitting a new one every few turns after that.

Once any player has achieved six objectives, the game ends and the scoring begins. Players earn points for coins collected, areas controlled on the map, and star tokens placed for achievements. After this, each player earns a multiplier based on their final “popularity” score. Thus, you can be the first player to achieve six objectives but still not win the game, so delaying that end-game trigger may sometimes be to your advantage.

Your personal player mat has two rows of four action spaces, although some of those spaces offer you a choice of two different actions. For example, the top left space may give you the right to move two units one space each or acquire one gold coin; then, if you have the resources already, you can spend two oil to upgrade one space somewhere on your mat—such as increasing your movement ability from two units to three. The game will prompt you to accept each decision and remind you if you forget to take an action. If you lack the resources to take a bottom-row action, the game makes it clear on the bottom of the screen rather than forcing you to count your oil or figure out why the action isn’t available. This is particularly important for certain actions that provide a one-time bonus that isn’t immediately obvious from the digital player map. (I regularly try to End Turn too early because I forget I’m supposed to get that bonus.)

The on-screen display manages to keep the information you need within one click, while not cluttering the center of the screen where the map (and thus the action) lies. You can expand the top bar to the right to see your counts in all of those categories I mentioned above as well as how far you’ve progressed on some of the objectives, and you can expand it down into the main area of the screen to see where opposing players stand in the same areas. You can open several text screens on the left side of the screen that provide information, like a list of all possible objectives you can achieve or the two private objectives you were dealt for this game. The developers also did an excellent job of making sure that highlighted areas on the map or choices on the player mat are sufficiently distinguished by their colors. You can also get a preview of the final score at any time to see if you’re ready to end the game or if you need to buy more popularity to boost your multiplier.

The Steam version of Scythe has run smoothly for me for months, even as Asmodee Digital has pushed upgrades to the Early Access version I was playing. The tutorial is long but entirely necessary, and I felt completely prepared to at least play the game after finishing it (though it took several games against the Easy AI players to get the hang of the planning process). There are still a few areas where something happens on the screen that isn’t clear—for example, playing as the Crimea faction, I had the special ability to use a two-power combat card in lieu of a resource, but I didn’t realize that was happening until after the game ended and I looked it up. Experienced Scythe  players will likely know these rules quirks, but new players could use a more direct on-screen explanation.

That’s a minor quibble for an app of this complexity. I’m not a huge fan of the tabletop version of Scythe , yet I found the app consistently enjoyable, even when I was still learning the game and getting my clock cleaned regularly by the easy opponents. That joy is in part that’s because of how quickly this game plays; entire games against three bots take just half an hour.

It’s on the expensive side for a board game port at $19.99, but the tabletop version costs $80 and the digital version packs more into its design than just about any other board game app I’ve played. Scythe: Digital Edition sets a new standard for porting complex Euro-style cardboard titles to the digital realm. With some other heavy titles in Asmodee Digital’s pipeline—including Terraforming Mars later this year and Gloomhaven  in 2019—tabletop players and video gamers alike should be encouraged to see this release come out as well as it has.