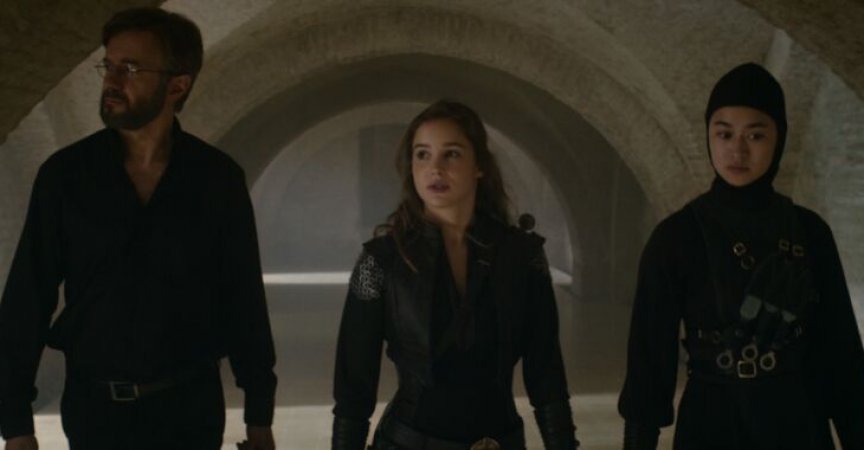 Review: fierce and fun Warrior Nun is a perfect Fourth of July binge-watch

A young woman gains extraordinary powers when a divine artifact is accidentally embedded in her back, and finds herself reluctantly battling demons on Earth in Warrior Nun , a new Netflix series based on the comic books by Ben Dunn. It sounds like a cheesy premise, but this adaptation is anything but. It’s a fiercely fun, entertaining, occasionally thought-provoking series that will have you hooked and eager for a second season.

(Mild spoilers below, but no major reveals.)

As we previously reported, the first issue in Dunn’s manga-style comic book series, “Warrior Nun Areala,” debuted in 1994. The series largely features Sister Shannon Masters, a modern-day crusader for the Catholic Church’s (fictional) Order of the Cruciform Sword. In the series mythology, the Order dates back to 1066, when a young Valkyrie woman named Auria converted to Christianity. Renamed Areala, she selects a new avatar every generation to carry on her mission of battling the agents of hell. Sister Shannon is the Chosen One. It’s like Buffy the Vampire Slayer got religion.

Dunn has said he was inspired to create the series after learning, via a New York Times article , about the Fraternity of Our Lady, which established a chapter in Harlem in 1991 to run a soup kitchen. One of the nuns (the fraternity has both nuns and priests), Sister Marie Chantel, trained in the martial arts (judo and Tae Kwon Do), and many of her fellow nuns also practiced self-defense, albeit mostly for sport. Dunn envisioned a world with nuns as superheroes, where heaven and hell are real dimensions.

Sister Shannon isn’t dominant in the Netflix adaptation—she only appears in a couple of episodes, played by Melina Matthews. Instead, the show focuses on a young woman named Ava (Alba Baptista). Per the official premise:

Caught in the middle of an ancient war between good and evil, a young girl wakes up in a morgue with inexplicable powers. Her search for answers brings her to The Order of the Cruciform Sword, a secret society of warrior nuns sworn to protect the world from evil. While juggling her responsibilities as the chosen one with the normal obstacles of a teenage girl, this mysterious fantasy drama is full of mystery, action, adventure, and teenage romance, proving our main character might fight in the name of good, but she’s no angel.

We meet Ava after she has just died in a Catholic hospital, having been there since she was crippled (a paraplegic) in a car accident at the age of seven. Her body is laid out in the church morgue by Father Vincent (Tristan Ulloa), when his crew of warrior nuns returns from what should have been a routine mission. Sister Shannon has been mortally wounded and they must remove the angelic halo from her back that grants special powers, and insert it into the next “Halo Bearer.”

But they are interrupted by a supernatural beast intent on retrieving said halo for itself. As the sisters scatter, one of them slips the halo into Ava’s body. The halo’s power brings her back to life, and also restores her mobility. But Ava is not a nun, nor is she particularly devout, and honestly, after a lifetime paralyzed in a hospital bed, the 18-year-old just wants to live a little. This rankles Cardinal Duretti (Joaquim de Almeida): “How did our greatest weapon against evil end up in an unbeliever?”

The whole armor of god

Father Vincent argues that Ava must have been chosen for a reason, and tries to convince her to take the role of Halo Bearer seriously. Mother Superion (Sylvia De Fanti) doesn’t think Ava has what it takes, while Sister Lilith (Lorena Andrea) was supposed to be next in line for the honor and resents being passed over in favor of Ava. Sister Beatrice (Kristina Tonteri-Young) and Sister Camila (Olivia Declan) are a bit more welcoming, while Shotgun Mary (Toya Turner) is grieving the loss of her BFF Sister Shannon and intent on revenge upon whoever betrayed the Order that fateful day.

There are also greater machinations afoot, starting with scientist and tech entrepreneur Jillian Salvius (Thekla Reuten), who has been using a mysterious material known as “divinium,” found on certain holy relics stolen from the Vatican, to create a prototype inter dimensional portal. She thinks this will usher in a new Age of Enlightenment: “Heaven exists, and I discovered a gateway to it.” This puts her at odds with the Cardinal and the Church—she has desecrated holy relics, after all. And the Cardinal himself seems to be intent on remaking the Order to serve his own ambitions within the Church. Ava clearly needs time to process and come to terms with her new situation—but that might be a luxury the Order can’t afford, as the beast is still hunting for the halo, leaving carnage in its wake.

The entire cast give stellar performances, but Baptista is luminous as Ava. The character could easily have come across as a spoiled brat in the early episodes, given that her learned defense mechanisms involve flippant irreverence and keeping people at a distance. Instead, you genuinely feel for this young woman who has suddenly been granted a second chance at life, able to feel sensations, to walk and run and feed herself, for the first time in 11 years. But the gift comes with a price: she is thrust into a spiritual war she doesn’t understand, with people she has no reason to trust after years of abuse at the Catholic hospital. There’s also her raging teen hormones and a super-cute boy (Emilio Sakraya) drawing her away from the Order.

The series is expertly plotted, with twists and turns that will keep you guessing until the final reveal.

We naturally expect there to be heroes and villains, but Warrior Nun takes a much more nuanced, less black-and-white approach to this than the original comics. In the comics, for instance, Julius Salvius is a Satanist and arms dealer whose minions regularly battle the Order. But his gender-swapped counterpart in the TV series, Jillian, is a more complicated figure—someone who seeks to rise above the longstanding the tension between science and religion for motives that might just be more personal (and less overtly evil) than one might otherwise expect.

Likewise, the heroic figures have all-too-human flaws that lead to ill-advised decisions at times: entitlement and resentment (Sister Lilith), jealousy (Mother Superion), anger management issues (Shotgun Mary), and being a bit too naively trusting (Sister Camila) and overly obedient to Church authority (Sister Beatrice). Another welcome departure from the comics: the nuns actually dress modestly, like nuns, rather than the silly cleavage-centric habits and loin cloths worn by the nuns in Dunn’s earlier comics.

The series is expertly plotted, with twists and turns that will keep you guessing until the final reveal. There is a rich historical mythology, and plenty of action and killer “Nun-Fu” moves, especially when Sister Beatrice lets out her inner ninja. (Watching her effortlessly take out a crew of Jillian’s security forces who assumed she was too small and weak to pose any threat is glorious.) And there are welcome moments of sly comic relief and contemplative reflection to break up the action now and then. Ava and her sister Warrior Nuns are definitely worthy to join the ranks of Buffy, Wynonna Earp, and Witchblade ‘s Sarah Pezzini as flawed-but-fierce women who fight against evil, in all its forms, for the greater good.

Warrior Nun is now streaming on Netflix, and makes for an excellent holiday weekend binge.