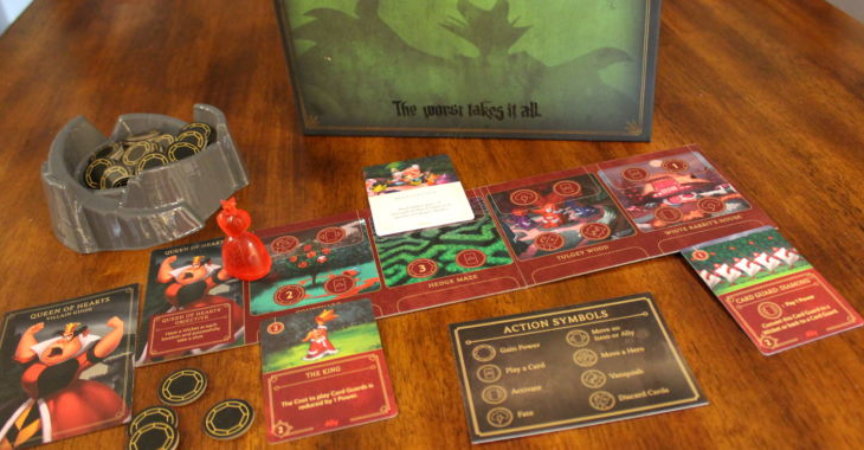 Play a Disney villain in new Villainous board game

Disney’s 1973 Robin Hood is objectively the best film the studio ever made—send all e-mail disagreements on this point to [email protected]—and my childhood would have been vastly poorer without the song “Phony King of England.” That’s why new board game Villainous so grabbed my attention. A board game in which you can play Disney villains? Including Prince John? And in which you can summon wolf archers, rhino guards, and Sir Hiss to combat Robin Hood? Sign me up!

Villainous is now widely available in stores, including Target and Amazon, but it’s not the mass-market cash-in you might expect. This is a surprisingly “gamery” game with some interesting mechanics and some lovely art. But still, can it live up to its legendary source material?

A unique feature of Villainous is just how… unique everything is. Each player has a unique player mat, unique win conditions, two unique decks of cards, and a unique plastic player pawn. With six villains—Prince John, the Queen of Hearts, Ursula, Jafar, Captain Hook, and Maleficent—in the box, there’s lots to explore here.

Play with Prince John, for instance, and you win by collecting 20 “power” tokens (because “this crown gives me a feeling of POWER!”), all while being assisted by allies like the Sheriff of Nottingham and attacked by heros like Robin Hood and Little John. But play with Jafar and you have a totally different goal: you must unlock the Cave of Wonders on your player board, then play the Magic Lamp card, then hypnotize the Genie, and finally move the Magic Lamp card over to the Sultan’s Palace. In doing so, you’ll rely on a totally different set of help and hindrance cards, each themed around Aladdin .

Regardless of character, gameplay is similar. Each player board has four locations on it, and on every turn you will move your player pawn to a new location and take the actions depicted there. (A handy player aid explains what each of the eight action icons represents, while a quick rules explainer video will bring everyone up to speed quickly.) The actions allow you to manipulate cards by playing them to your player board (which costs “power”), moving them around once played, discarding them, activating abilities shown on them, and using them to destroy cards played against you.

Yes, there’s plenty of “take that” in this game as you play nasty cards on other players. This happens through the “fate” action, which lets you draw two cards from any opponent’s “fate” deck and play one of them against that opponent. These fate decks are unique to each player’s world and feature heroes, items, and effects that make life more difficult for each villain. Maleficent’s fate deck, for instance, features King Stefan, who lets you move the Maleficent player pawn to any location, and Prince Phillip, who lets you wipe away all of Maleficent’s henchmen from a single location. As heroes are played to an opponents’ board, they cover up vital action symbols, making the game tougher going until the heroes are dispatched.

Players need to balance making progress on their own goals with mucking about in opponents’ realms, hoping to disrupt their plans, and the game continues in this fashion until someone satisfies a win condition.

Nothing about the gameplay is particularly complex for seasoned gamers, but be aware that this is no breezy family game. With every faction completely asymmetric, it can take some time to understand both what you should be up to and how your opponents can best be stopped. And because every card features some kind of rule modification or explanation, there’s a lot of text to process. (Sample card: “If there is a Wicket at each location, reveal the top five cards of your deck. If the total Cost is less than the total Strength of all your Wickets, you make the shot and win the game. If not, discard the five revealed cards.” Whew!) The game is recommended for ages 10 and up, but I know plenty of non-gaming adults in my own family would take a while to grok this. And people are definitely going to gang up on whoever looks closest to winning.

The artwork in the game? Terrific. As noted above, every character in the game has not one but two decks of unique cards themed to their movie world; each of these decks comes complete with a custom back. The cardboard “power” tokens could have been placed in a pile on the table, but instead a big plastic bowl is provided. Every player board features a unique design. The plastic character pawns are each two inches high. The box cover is gorgeous. Et cetera.

The actual components on which all this great art is printed, however, feel just the slightest bit cheap. Cardstock is flimsier than I’d like. The plastic “power” bowl is microscopically thin and will be crushed beneath a toddler’s foot. And the large plastic player pawns, at least in my copy, are unaccountably scuffed, cloudy, and just… “dirty” looking. (I’m not the only one to notice this .) On the other hand, the game is $35 instead of the $50 or $60 some other big-box games demand.

In the end, I like the idea of Villainous slightly more than I like the actual game. I enjoyed my plays, but in each one, I felt like the game was dragging slightly. (This was especially true in a four-player game, though some of this will no doubt decrease as a particular play group gets to know the various villains better.) Card play can become slightly tedious as the game continues, especially for those villains whose win condition involves many steps: unlocking locations, moving cards, and waiting for certain items to appear in your hand.

But the theme is terrific, the art truly brings each villain’s realm to life, and the asymmetry makes playing each character a vastly different experience.

If you aren’t a massive Disney fan, this is a solid “good but not quite great” game well worth checking out—but I would try before you buy. You may find other “card battle” games more to your liking.

But if you have a special place in your heart for Disney movies, and for Disney villains in particular, this is an easy “buy” recommendation. And if you don’t see your own favored villain in the current box, don’t worry; Wonder Forge is currently taking votes on new villains to add in the (inevitable) expansion.