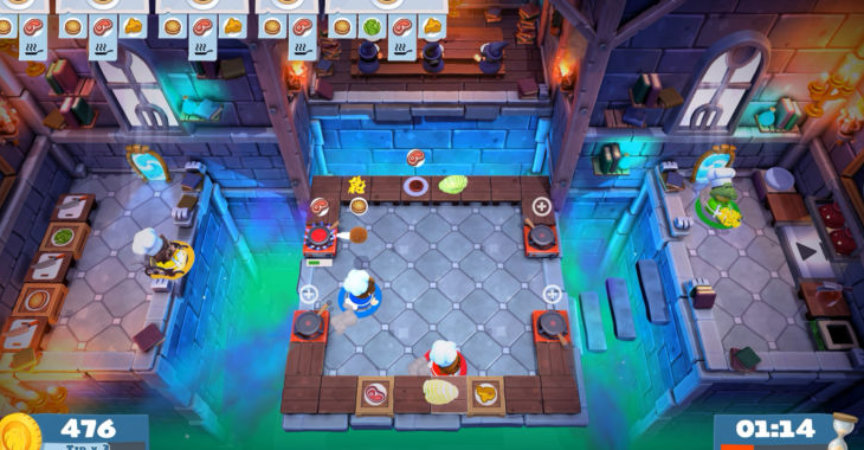 A couple of years ago, we declared the original Overcooked“the new couch co-op champion” thanks to its elegant mix of a charming, simple-to-learn concept, clever level design, and chaotic multitasking gameplay. Overcooked 2 feels more like an expansion pack for that strong basic concept than a full-fledged sequel. Still, it adds a much-needed coat of polish and some important new features—including online multiplayer—to help bring the game to the next level.

If you’ve played the first Overcooked , you know how the basics work. Up to four cooks share a kitchen contained on a single screen, working together and running around to prepare food orders that appear in the corner. That means pulling up the raw ingredients, taking them to a cutting board for chopping, dragging the chopped ingredients to frying pans/pots/ovens/steamers for cooking, then putting the finished dish on a plate and delivering it to hungry customers. It’s all about efficiency and effective multitasking, with scoring bonuses and multipliers for filling orders quickly and penalties for missing orders before the time limit is up.

The more things stay the same…

Things start off simply enough, and even novices will have a fine time working together to chop up raw sushi and mix it with steamed pots of rice. By the later levels, though, you’ll end up screaming desperately at your partners to throw some chopped chocolate into the pancake batter as you run to save a cake from the oven before it burns, all while the dirty dishes are piling up and random fireballs are blocking your path with flame.

The only significant gameplay change Overcooked 2 adds to the original mix is the ability to throw raw ingredients rather than always carrying them across the kitchen. This is especially useful when different parts of the map start shifting and separating from each other, often leaving at least one cook stranded from a crucial cutting board or frying pan. Now, instead of waiting for the map connection to cycle back, you can just throw the ingredients across the gap to another player for preparation.

The increasingly over-the-top level design helps keep things fresh but doesn’t help lower the stress factor. Players are often forced to push past each other in narrow walkways or fight conveyor belts and windstorms just to simply maintain their position. The overly loose controls don’t help here, either, often leading to mistakes in dropping an ingredient on the right tile or navigating precise paths. This can be especially annoying in levels where one wrong step means falling into a pit, losing five precious seconds and whatever prepared ingredient you happen to be holding.

Near the end of the game, the level concepts start to get a little too gimmicky for their own good, too. One level requires one player to man a joystick that can guide the other player where they need to go on a platform. Others use moving, teleporting magic mirrors or rocky outcroppings that rise out of lava pits, making simply getting around a chore. Even simpler levels often force you to manage elevators, door switches, rotating platforms, and bits of scenery that move and shift on regular intervals.

Call in some friends

None of these annoyances is game-breaking, and levels that seem unmanageably hectic on the first try can seem much more routine after another attempt. In any case, most of the game’s worst qualities simply fade to the background when you’re playing with a good group of friends.

You can technically play Overcooked 2 as a single-player game, tapping a button to switch between two on-screen cooks. The game was pretty clearly not designed for this mode, though. Sure, a single player can set one cook chopping or cleaning dishes, then take control of the other to gather or cook other ingredients. More often, though, the single-player experience means just running around and doing everything as a lone cook, losing that carefully coordinated multitasking ballet that makes the multiplayer game so much fun.

The original Overcooked was thus incomplete unless you had nearby friends or housemates willing to play with you. Overcooked 2 , though, adds a handy online multiplayer mode to let you cook with friends. The bare-bones multiplayer worked just fine in some brief pre-release testing on the Switch, with minimal lag or frame rate dips getting in the way of the action.

That said, the lack of an integrated voice chat on this version of the game means you pretty much need a third-party solution for talking to each other—built-in text “emotes” just don’t convey the necessary information in the hectic kitchen climate. We’re also a little bummed that there’s no cross-platform multiplayer options, meaning your friends better have the same version of the game that you do.

Online or off, Overcooked 2 is still some of the most accessible and over-the-top cooperative fun you can have gaming with a group of friends. The structured chaos is perfectly designed to generate the kind of laughing and screaming that makes for memorable moments. More competitive players might need to leave some of their killer instinct at the door, though, especially if playing with less experienced gamers. It’s amazing how mad some people can get about accidentally dropping a virtual tomato in the trash…

The Verdict: Get it if you have a friend or two who can play it without getting too competitive. Skip it otherwise.