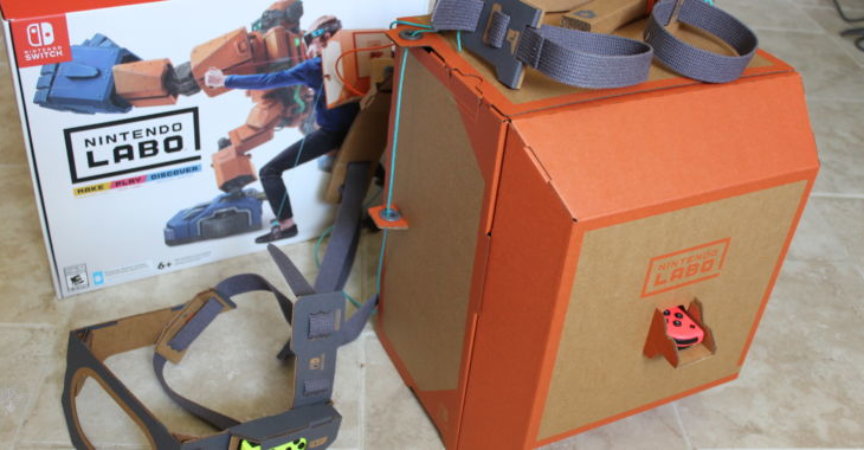 There’s a lot to unpack with the build-your-own-controller series of Nintendo Labo kits . Figuratively, the two boxed releases, dubbed Variety Kit and Robot Kit, include many opportunities to build, play, experiment, and learn, and that’s worth exploring. Plus, they have to be literally unpacked before you can even get started—because you have to clip a zillion cardboard pieces together to turn your Switch into a range of weird toys.

As such, my colleague Kyle Orland has taken his time to play with the Variety Kit since its April 20 launch, specially because he has invited his young daughter to participate. Nintendo Labo absolutely screams parent-child participation in its advertisements, packaging, and in-game presentations, and it opens up the opportunity for families to build weird stuff like a functional piano, a motorcycle, and a Tamagotchi-like cardboard house.

In the meantime, I’ve given Nintendo’s pricier Robot Kit a different kind of spin: as a grown-up kid-at-heart who might buy this for solo use, since it looks a little more “gamer”-y. My findings, however, are that the package is a bit of a bummer for all ages.

The Labo Robot Kit, unlike the $70 Variety Kit, costs $10 more and includes a single large project’s cardboard parts. You don’t get a variety of small “Toy-Con” cardboard-controller options here; instead, you’ll spend over two hours building a multi-part backpack with matching hand, foot, and head attachments. Clear instructions and easy-to-assemble pieces keep the building-process friction to a minimum, at least, and you can get a taste of it in the above gallery. (Throughout the instructional phase, Nintendo’s English translation team has fun with puns and silly phrases of encouragement. This helps the hours pass with a few more smiles for you and any nearby kids.)

The assembled backpack includes four sticker-covered cardboard levers, and each of these connects to one arm or foot handle. Put the backpack on your back; stick foot-sized holders onto your feet; and hold onto two cardboard handles with your hands. In a corresponding game, backpack wearers stomp feet or punch hands to move these levers, and the Switch’s Joy-Con IR camera, inserted into the backpack, will read the levers’ reflective magnetic tape to make a giant, on-screen robot stomp and punch in kind. The Switch’s second Joy-Con affixes to a visor, and you can lean your head and body to turn your robot’s orientation accordingly.

The setup is like Nintendo took the X and Y axes of two joysticks and pulled them out so you have to move hands and feet to control them, with a pinch of head tracking to boot. This is all kinds of clever, and there’s no understating the feeling of your stomps and punches matching an on-screen avatar while your cardboard kit makes childish “bonk” noises. That kind of controller transformation seems ripe for multiple mini-games or experiments, particularly since the set requires so much build time compared to the separate elements of the other, slightly cheaper “Toy-Con” kit.

However, Robot Kit only ships with a single “destroy a city” game referred to as Robot in the software. You land in a simple-polygon future-city, like something out of Star Fox 64, and your robot must punch and stomp its way through everything in sight. Like a classic arcade cabinet, the game is shaped by a timer, an objective of getting the highest score possible, and a “combo” multiplier (like in Devil May Cry and other modern beat-’em-ups) for when your robot destroys multiple objects in a row.

This combo mechanic exposes Robot Kit’s biggest frustration point: that it’s awkward to quickly, comfortably, and reliably pilot your giant robot from one point-scoring object to the next. Yes, it’s fun to chain actions together and feel like you are this monstrous robot; Nintendo’s design prowess is evident even during this game’s most awkward segments. But stomping in place makes your character move very slowly forward, and leaning your body to turn is hard to do during any frantic “punch all the things” moment when it just makes more logistical sense to turn your entire body (and thus face away from a television set). I’m a grown-up who understands the limitations of controllers’ motion sensors, and I still found myself turning my full body on a regular basis. Triple that for an excited kid who believes he/she has become a city-stomping robot.

Most of the game’s other maneuvers—like holding both arms out to “fly” or pulling your visor down over your face to enable a first-person laser—don’t add the critical speed needed to keep the combo counter ticking. The exception is a faster tank mode that is enabled by physically crouching. Labo players of a certain adult age can expect to feel uncomfortable alternating between standing and crouching to fulfill the combo counter’s timing requirements—and these are the kinds of players who will likely care about a high score, as opposed to little kids who may not give a hoot about scores as they stomp around.