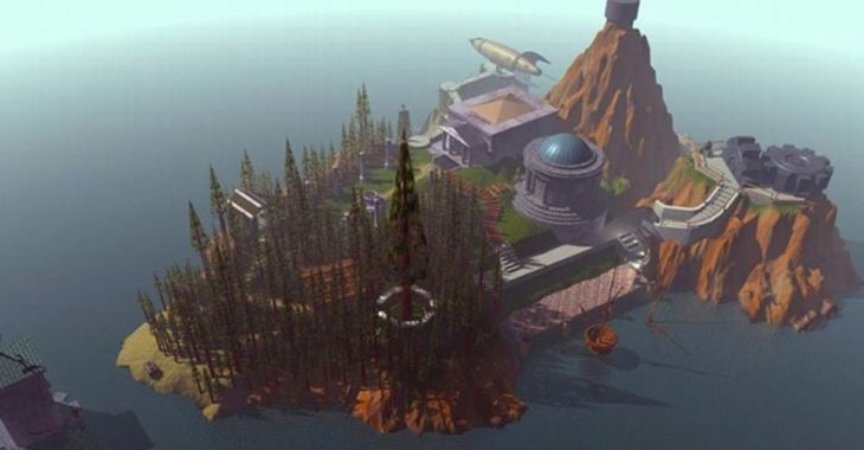 Myst and Obduction developer Cyan Worlds launched a Kickstarter on Monday for a complete collection of every Myst title ready to run on Windows 10. The Kickstarter will also cover some extras like original, hand-drawn artwork from the development of Myst‘s first sequel, Riven, a replica of Ghen’s pen and inkwell and a real-life, working Myst linking book—sans actual teleportation, of course. It’s labeled the “Myst 25th Anniversary Collection,” because September will mark 25 years since Myst ‘s debut.

The team at Cyan says it has worked with the team at GOG to update all the games to run in Windows 10. The collection will include Myst, Riven, Myst III: Exiles, Myst IV: Revelation, Myst V: End of Ages, Uru: The Complete Chronicles, and the fully 3D Myst remake realMyst . Cyan says that, to make this happen, it had to acquire the rights to the games in the series that it previously didn’t own:

Behind the scenes, we’ve been working to procure the legal rights to make all of the Myst games available. As an indie developer, resources are limited for development, and acquiring these rights isn’t always an option. But we’ve finally managed to talk with all the right people in all the right places to garner funds to make it happen!

Myst, Riven, Myst V, Uru, and realMyst are all available on GOG and Steam already—and they all work just fine on modern systems. These are the games Cyan already owned the rights to. The other two games—Myst III and IV —have previously been the property of game publisher Ubisoft, which has not made them available digitally. These appear to be the two games that Cyan has managed to secure the rights to.

The Kickstarter description goes out of its way to say this is a once-in-a-lifetime opportunity, even though the games will be available digitally later through the usual channels (and most of them already are).

It’s also worth noting that Mac will not be supported. That’s disappointing and unusual both because Cyan has a long history of supporting Apple platforms and because porting games to the Mac has generally been a lot easier than it has been in the past, especially when cutting-edge graphics technology is not involved.

Here’s what Cyan has to say in the Kickstarter about porting to Mac:

Myst started out as a Mac-first title, and over the years, Cyan has always released each of our games for the Mac. But for various reasons, maintaining some of those Mac titles now means rebuilding them from scratch—an option that, as a small indie studio, takes time or resources we just don’t have. And for games that were produced by other studios, even that option may not be possible. Although most games in this Anniversary Collection are not compatible with MacOS, Cyan will continue to work to update or rebuild some of the Mac titles and explore other options to try to make more of the games playable again on the Mac in the future.

Here are the backer tiers:

Go up to $250 and you get all that, plus replicas of Ghen’s pen and inkwell. And the top tier is a whopping $1,000, but it also has the most enticing prize: original, hand-drawn artwork and design sketches from the development of Riven .

Cyan is making both versions of the book in tandem with Idea Planet, a firm that makes collector’s edition items for games, like a replica Ghost from Destiny . These are the listed specs and details for the book:

Unfortunately, Cyan only has digital mockups of the book on display at the Kickstarter page—surprising, given that people have made working prototypes of the same idea in the past. It’s an odd Kickstarter, given that the majority of the games are already available. For that reason, it feels as if this Kickstarter is raising money more for the collector’s item products than for the games themselves. Even though Myst III and IV aren’t available digitally, it’s not difficult to find physical copies on Amazon and other marketplaces.

That special packaging and the artifacts might appeal to collectors, but they’re not necessary for most Myst aficionados. So for most of us, this is just an announcement that we’ll be able to digitally download Myst III and IV soon. Does that justify a $247,500 Kickstarter? You can decide for yourself.