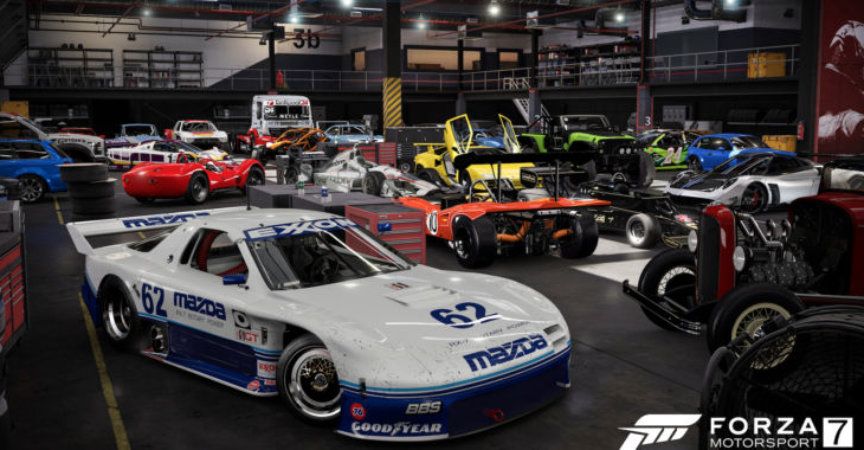 Like it or not, there’s no denying that the entire history of video games as a popular medium can be told through the steady evolution of three simple acts: shooting a pistol, jumping from platform to platform, and redlining a car’s engine. Even as gaming has democratized over the past decade—with eased access to development tools like Unity ensuring that more offbeat or intellectual fare has the chance to find an audience—the traditional big-budget core of the market has become even more monolithic. Today, only a handful of so-called triple-A developers churns out a steady stream of military-taupe shooters like Call of Duty or sun-spangled racers like Turn 10 Studio’s Forza series.

For that last category of gaming fans, this thinning at the top has devastated the once-diverse racing genre, largely due to the ever-increasing technological standards and demands of today. Players continue to thirst for the feeling of gliding a Lamborghini around a gentle curve rendered as accurately as possible, and only a handful of studios currently has the budget or the infrastructure to keep up.

But if you talk with veteran artists who put hours and hours into these games over the years, this technological arms race has always whirred beneath the shining surface of the pristine racing sims that players know and love. Today, Turn 10 and others continue to push the boundaries of photorealism past the “uncanny valley,” but 25 years ago it took a similar amount of dedication and know-how simply to make any car appear 3D rather than 2D.

Like any good technological evolution (say, mobile gaming’s long road from the Game Boy to the smartphone), the tinkerers driving major changes demonstrated extreme resourcefulness right alongside ol’ fashioned innovation. As the following war stories attest, through the years, each of these scrappy studios struggled to take the inside line from their fellow developers. Instead, they advanced the genre by jumping and maneuvering through a wide variety of devious technological hoops, despite each seeming impassable at the time.

Joakim Wejdemar is the founder and president of Valkyrie Entertainment, an “outsourcing” studio based in Seattle that produces assets for some of the biggest studios in gaming. But before he moved to the US, he got his start at Digital Illusions in Sweden, the studio better known as EA DICE. Back in the late ’90s—before DICE made its name with the Battlefield series, which later led to its acquisition by industry titan EA—the then-Gothenburg-based developer churned out pixel-art pinball games for personal computers like the Amiga. These games attempted to replicate the frantic fun of a real-life table. And after a few projects, Wejdemar ended up as one of the seven-or-so-strong team behind Motorhead .

“We were trying to do two hard things at once,” he says. “It was our first 3D game and our first racing game, so it was very experimental. Most of the people in the industry in Europe came over from the demo scene, which was basically just a bunch of kids competing to make the best tech demos. They were flashy, very striking, and we brought that to the games. Back then, it wasn’t about the story or the content of the game, really—it was about having the best lens flare.”

As Wejdemar recalls, the 1998 PlayStation effort Motorhead belonged to a wave of racers that were inspired by Wipeout, the hit 1995 future-fantasy racer for PlayStation that bounced and swerved to the beat of a cult techno soundtrack from artists like the Chemical Brothers. As such, the Digital Illusions team discarded the more grounded stylings of contemporaries like Ridge Racer for a more audacious approach. “The whole reason we made a racing game was because we thought it would be easy and a good way to show off the technology,” says Wejdemar. “It’s funny to say that now, because the technical requirements to make an ‘accurate’ racing game these days are so insane. Studios like Turn 10 take real-life drivers that have raced a certain track in a certain car, and they try to tune it so that drivers can get an identical lap time in the game.

“In Motorhead, the cars didn’t even have four wheels—they were just one physics object colliding with the ground,” he says, laughing. “We were just visually approximating how we thought it was supposed to look when a car brakes or bends a corner. It was as unscientific as you can get—it was all about the feeling. Even when we were doing the pinball games, we would take a piece of plywood and a pinball, stand there with a stopwatch, and drop it onto the plywood, trying to figure out how long it took to roll down from various heights. That’s what physics tuning looked like in the early ’90s. And we did even less than that for Motorhead.”

From Wipeout to Ridge Racer to Motorhead, the original PlayStation marked the inflection point where home console hardware finally caught up with the outsized ambitions of simulation-minded developers everywhere. At the same time, the success of classics like Gran Turismo on the sales charts helped cement the genre as a commercial force. But it was 1994’s Road and Track Presents: The Need for Speed —a mouthful of a title, especially for the starting point of a much-vaunted franchise—that served as one of the very first truly excellent home driving games. Developed by EA and originally consigned to the doomed early disc-based machine known as the 3DO, art lead Markus Tessmann distinctly recalls working around both the strict hardware limitations of the ailing console and the somewhat-strained budget assigned to the unproven team.

According to Tessmann, EA had cajoled him out of his decade-long career making top-flight 3D graphics for feature films and commercials with the promise that his expertise would help them make cutting-edge 3D games. But after etching a handful of traditional pixel-art games for the Sega Genesis, Tessmann began to grow exasperated. That is, until he heard about their next project. “They told us that they wanted us to make a driving game for the 3DO, and I thought that was great,” he says. “But then they told us that they wanted it to be a 2D game similar to Sega’s OutRun, or the hit game of the time, Road Rash. Just 2D bitmaps of cars that we’d scale, to give the illusion of depth. I was like, are you fucking kidding me? That makes no sense. It’s the 3DO, not the 2DO.”

Tessmann appealed to his bosses at EA, but his pleas were left unanswered. So, he decided to make a prototype instead, recruiting a coder friend to make 3D cars a reality. Eventually, EA saw the work—and took Tessmann’s early attempt and ran with it. “The same thing is true of the physics engine,” he says. “One of our coders, Wei Shoong Teh, was getting no institutional support from EA. They thought it was impossible. So, he went outside and built his own prototype, and they loved it.”

Rendering the high-end sports cars into the game itself proved to be a stiff challenge, especially given the need for an impressive frame-rate. After all, a game called The Need for Speed couldn’t be sluggish. “We actually found plastic models of the cars, painted them gray, and had them scanned into the game,” Tessmann says. “It was ridiculously expensive, something like $2,000 a pop, and this is back then. Still, it gave us a great reference to work from. Coming from the film industry, I was so used to producing high-fidelity movie stuff, and all the tools were optimized for that as well, so we had to build our own tools. We couldn’t even use Photoshop because of the 3DO’s obscure format, which required every triangle to have its own bitspace. I had to adjust them all by hand.”

Though the jagged, inchoate vehicles of the original Need for Speed might seem primitive today, in 1994, they were considered remarkable—perhaps not bleeding-edge, but still sharp enough to make a lasting impression. For Tessmann, capturing the seductive curves of a sizzler like the Lamborghini Diablo VT with so few polygons proved to be quite frustrating. “We had 64 triangles to work with, or something ridiculous like that, so getting the general shape was really difficult,” he says. “All of the detail had to be in the texture maps. I tried to capture the silhouette of the cars with the few triangles I had and use textures that I projected from the high-quality scan of the plastic cars onto the low-poly version. I would’ve preferred to use an in-depth photoshoot, but we didn’t have that kind of access to the cars, or the budget. We did the best we could with the tech we had.”

When slung side by side with fellow sprite-based 3DO racer Road Rash, the contrast in the “draw distance” between the two games remains rather striking—in Need for Speed , the road undulates down to the horizon, like you’d expect. Though it might go unnoticed today, Tessmann describes it as one of the great breakthroughs for the team. “Brad Gore, the lead coder on the team, came up with that,” he says. “The 3DO was really underpowered, but it was great at playing back movies. Well, once the tracks had been designed, he rendered, overnight, a complete movie of the car driving down the track. But then he rotated it 45 degrees, to prevent ‘jaggies’—basically, those little tessellated lines that appear when you’d expect a curve. The whole background of the game is basically just a movie file playing in the background. That’s the secret of its phenomenal draw distance.”