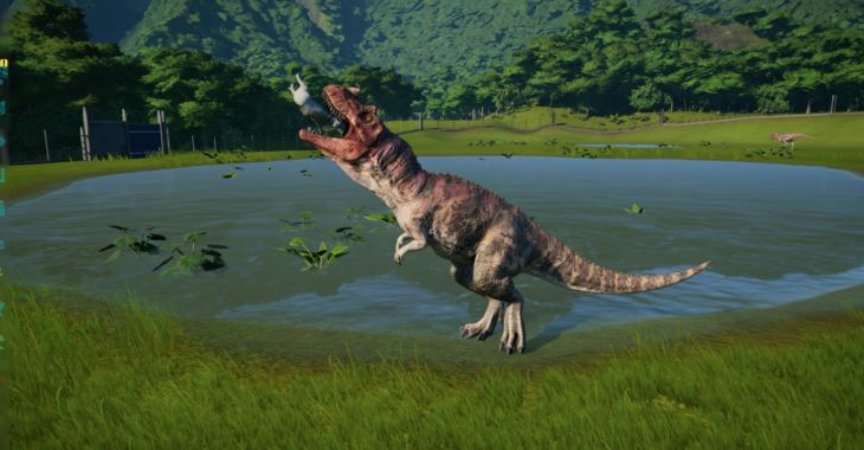 Jurassic World might just be the worst movie I ever paid money to see. It wasted a perfectly fine premise (rich people doubling down on past mistakes for profit) on a soulless, oddly sadistic “adventure” that wiped out whatever hope I had left that there will ever be a great sequel to the wonderful 1993 original Jurassic Park .

Which is why I’m thrilled that, despite sharing a name, Jurassic World Evolution has nearly nothing to do with that infuriatingly profitable nightmare. There are nods here and there: you can eventually build those hideous bubble cars, for instance. Bryce Dallas Howard seemingly contributed about 30 seconds of voice acting. There’s a Chris Pratt soundalike to match a photo of his face that occasionally advises you. Other than that, though, this park management sim is its own scaly beast.

As well it should be. When it comes to good premises, planning and operating your own version of Jurassic Park is definitely one. And I’m happy to say Evolution uses that potential much better than its namesake film—at least for a while.

The plot of Evolution basically ignores the events of both World films. You’re just a faceless, nameless manager selected to make a new dinosaur park profitable. That means cloning terrible lizards, arranging gift shops and restaurants for audiences, and keeping your corporate departments happy. That last item is especially important. Managing park attendance earns cash, but playing nice with your heads of science, entertainment, and security is how you progress through the game.

Completing random contracts, like raising your income over a certain threshold, boosts your reputation with the departments that assigned those contracts. Grinding enough rep opens up scripted missions, which usually in turn unlocks upgrades to spruce up your park. It’s plenty of rinsing and repeating as you grind through this cycle across five unique islands, but it’s a grind that’s mostly papered over with personality.

Jeff Goldblum reprises his role as Dr. Ian Malcolm for a surprising number of scenes, mostly to smugly remind you what a terrible idea everything is. Your primary advisers make excellent foils to his nervous prodding; each is basically a different flavor of single-minded scumbag. Security wants to engineer and sell the reptiles for combat, while the entertainment department isn’t above pitting them against each other to draw attention. The science head is more subtle: her contracts usually ask you to tinker with that all-important dino DNA just to see what will happen. It’s fine as long as the guests are “mostly” safe, she argues.

The corporate evil of your staff is so nakedly obvious that it comes across as funny rather than concerning, and I suspect that’s intentional. Even if it isn’t, the department heads’ monomaniacal focus goes a long way toward explaining why anyone would reopen a theme park where the guests are regularly eaten… again.

The occasional mauling is still a concern in Evolution , of course. You can’t just pop a velociraptor in an enclosure and leave it alone. Each creature has a set of social and environmental needs to keep it from tearing down the fences (and subsequently munching on tourists). T-Rexes are oddly fine sharing space with other dinosaurs, for instance, but not with other T-Rexes. Raptors are just the opposite, only comfortable with their own kind—and sporting a very low tolerance for discomfort.

Managing all of this can seem like a lot to handle, at first, and it is. But while it can be complex, it’s just not very difficult. If guests need food, build them another diner. If your favorite triceratops gets sick, just click the ranger station to order them medicine. Nearly every problem has one obvious solution without any obvious downsides, besides the cash cost. Despite this, Evolution throws mountains of mostly meaningless data at you at every turn, making things look more complicated than they are.

I wish that wasn’t the case. Not only does the presentation make the game seem unnecessarily intimidating at first, but the underlying simplicity means that solving the park’s endless problems starts to feel like playing from a teleprompter. Dropping gift shops around an island to placate guests loses some of its charm after the fifth or sixth placement of an identical store (and not even a cute Easter egg can of Barbasol in the shops themselves can make it feel less annoying).

The lack of variety might not be so grating if I had to think harder about building placement. But Evolution ’s structures don’t really interact in interesting ways. You can place a power plant right next to a hotel, for instance, without guests complaining about noise or pollution. The only major spatial consideration is transport, since nobody wants to walk 10 miles from the park entrance to the spinosaurus exhibit, right? Of course there’s a simple and uniform solution to this problem, too: monorails. Plop one down where the game says to, and you’re golden.

Too much of a similar thing

The game does have plenty of diversity in one respect: there’s a smorgasbord of incredibly detailed, well-animated dinosaurs to clone and care for. And the game encourages you to do that cloning as much as possible; “variety” always seemed to be my park-goers’ primary demand. Sometimes all it took to double my income was introducing some new genus of spiky, 20-foot turtle to the mix.

Even this menagerie has its limits, though. Once your dinosaurs are released into the correct habitat, they’re basically good to go, though you’ll have to manually change their food and sometimes medicate them to keep their health up (both of which feel oddly menial to be doing a dozen or more hours into the game). And there’s no upgrade to automate any of the tedious little tasks you’re faced with from the very first moments of a campaign. It doesn’t help that water-based and flying animals are conspicuously absent—meaning no new care-taking challenges arrive to mix things up.

Like the management itself, the fun of seeing Jurassic Park’s fictionalized dilophosaurus saunter out of its birthing chamber wears thin with repetition. Sure, you can splice different scale patterns into the creatures’ genes, increasing the critters’ popularity at the park in the process (with increased risk that the expensive cloning process will fail). But these slim fashion choices only had me wishing for more. If you’re going to let me play with dino DNA, let me go the whole way and create custom, ridiculous color patterns for my customers. It’d be silly, sure, but so is the game itself.

Instead, it’s the flatness that ends up killing Jurassic World Evolution. There’s just not enough range to the buildings you create or the creatures you tend, and when the game does throw a wrench into your perfectly arranged park, the solution too often boils down to throwing easy-to-come-by money at it. Even dead attendees get boiled down to a temporary loss of income due to lawsuits. Apparently what happens on Isla Nublar stays on Isla Nublar.

While the game does eventually die to repetitive cuts, it’s a slow death. The game’s charm, visuals, and novelty hold up for a quite solid few hours of fun, and the premise isn’t completely wasted. But it’s also not utilized to its fullest potential. Maybe an expansion or two can bring this one back from extinction down the line.

Verdict: A solid framework for a game without any legs. Try it, or wait for an expansion to flesh things out.