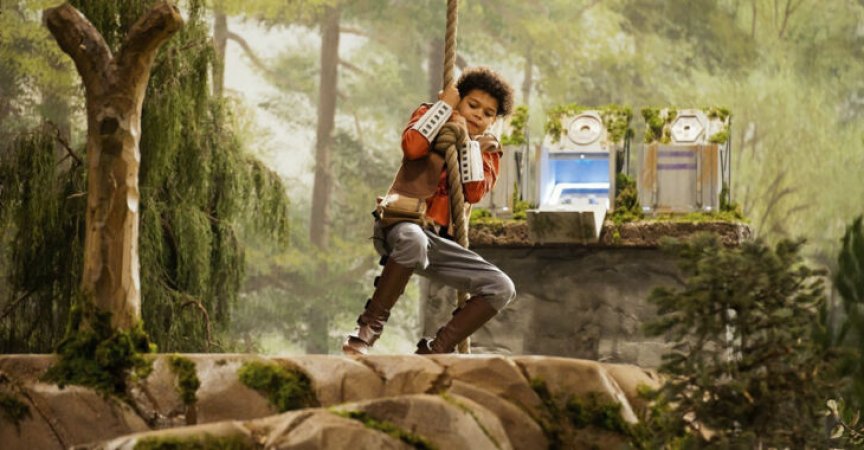 This week a new kid-friendly gameshow, Star Wars: Jedi Temple Challenge, made its debut on YouTube. The premise is simple: what if we make something like all those Nickelodeon gameshows ’80s and ’90s kids grew up on but high-budget and Star Wars themed? To which I thought: yes, please!

Decades ago, Nickelodeon owned the kids’ gameshow space. The popularity of Double Dare (1986-1993) begat Guts (1992-1995) and, one year later, my personal favorite, Legends of the Hidden Temple, which has more than a little bit in common with the Jedi Temple Challenge .

The similarities are not accidental. The official Star Wars website itself describesJedi Temple Challenge as “an homage to the kids’ cable gameshows that dominated the air waves in the 1990s.”

Legends of the Hidden Jedi Temple

Really, I was already too old for Legends of the Hidden Temple when it premiered in 1993. I could too easily see its patterns, feel the transparency of its construction, and sense that watching it was something I shouldn’t admit aloud in the harsh social environment of junior high.

And yet: oh how I wanted to be the right age for it! Too tall and too heavy by far for those sets, with no sibling or cousin I could partner with, I still imagined myself swinging across the moat, dodging through the temple, and putting that damn silver monkey together (that’s the bottom, how can you not see it’s the—no, you know what, nevermind ) to emerge victorious with whatever fancy toy and vacation prize were on offer.

If I was too old for that show in the 1990s, 27 years later I am certainly well outside of the intended audience for Jedi Temple Challenge . My opinions on it, as such, may not be fully reflective of the experience. How fortunate, then, that I have a member of the target audience at home to watch the show with me.

My daughter is almost 7 and has just wrapped up her last week of first grade. She inherited from her father a deep love of gameshows and from both of us a love of video games and nerd media, including Star Wars. So I sat down on the couch with her to watch the first episode of Jedi Temple Challenge and told her she could help me tell other families if they should watch it, too. At the end of the first episode, she announced, “I want to watch the next one!” and promptly plucked the remote from my hand to hit play.

Jedi Temple Challenge has three teams of two kids each competing in three stages. One team is eliminated at the end of each stage, leaving the last pair of contestants to face the challenge of the Jedi temple itself.

Host Ahmed Best—yes, that Ahmed Best—introduces the contestants and guides them through the challenges while joined by a kid-friendly, mildly smart-aleck droid companion. Best is an able host, exactly affable enough without feeling forced, which highlights just how badly he was served by the prequel films.

Happily, although my daughter has seen the movies, she does not make the connection to Jar-Jar and simply says, “I like him, he seems nice,” before the show moves on.

The first challenge is bravery, and it puts all three teams in the same obstacle course: a large set styled to appear outdoors in a forest environment not unlike Endor. Each team has to complete four tasks. The first two teams to do so advance, and the last team is eliminated.

The design of the obstacle course creates a significant advantage for older, taller kids. The two episodes we watched each featured one team of two 10-year-old contestants playing against teams of kids ages 12 to 14. In both episodes, the youngest pair had the hardest time with the height-related sections of obstacle courses (although in one of the two, the youngest younglings nonetheless managed to advance).

Knowledge can be dull

After the obstacle course comes a knowledge section, in which the two remaining teams move to a spaceship set and have to listen to a story told to them. After hearing the story, they face a challenge most adult viewers will peg as being functionally a comprehension exercise straight out of grade school and its standardized tests. But it’s significantly cooler because it’s Star Wars .

From where I sat, the knowledge section seemed by far the hardest and also the slowest. The kids hear the story exactly once, without themselves reading it, and while some of the details they are asked to recall are fairly straightforward, others are pieces that would be easy to miss. The knowledge section is also the most susceptible to dragging, as it lacks the physicality of the other acts and can result in a condition where nobody knows the correct answer, much like that deer-in-headlights Jeopardy! moment when no contestant buzzes in.

“Do you think the part with the story looks easy or hard?” I asked my daughter.

“Easy,” she informed me, witheringly.

“Did you remember everything the story said?”

Once one team reaches five correct answers, they get to advance to the titular temple challenge. In both episodes we watched, the sequence of challenges inside the temple was identical.

The most interesting challenge comes about a third of the way through: a Keep Talking and Nobody Explodes -style puzzle where the children are separated and one can see the answer, but the other can manipulate the pieces.

The sigils on the pieces themselves are tricky to describe, and when children try it under pressure, their attempts—”the one like a rectangle with lines”—can be vague. So while the kids frustrate each other, the Dark Side calls them—literally. By name. Each partner has access to a glowing red kiosk that calls them by name, challenges them, taunts them slightly, and tries to undermine them the more they ignore it.

Touching the Dark Side crystal allows the players to bypass the puzzle—with the warning that giving in to the Dark Side may make later tasks more challenging. In one episode, the team persevered without giving in. In the other, one player made the strategic decision that they were using too much time on the one puzzle and should bypass it in an attempt to make up the time later. Strategically, this appeared to be the correct call, I mused aloud, and probably if anything they should have done it sooner than they did.

My daughter, on the other hand, was properly repulsed as any good junior Jedi would be. She responded with a scandalized, “NO!” when I asked if she would have listened to the Dark Side.

But is it fun?

You can’t beat the production values Disney brings to its Star Wars programming, and Jedi Temple Challenge is no exception. But do all the costumes, tech, fancy interactive sets, and slick editing make the show entertaining for its actual target audience?

“Yes, yes, yes,” my daughter tells me. “I thought the temple looked interesting!

“I like the obstacle course best,” she added, before trying to replicate its jumps on our new living room sofa (“Please stop, baby.”). “But in the second episode, it was boring that the purple team lost and that every team lost.”

So what’s your verdict, kiddo?

“I would tell other kids that it’s a great show.” And like all of us, she mostly imagines herself inside it. “If I went, who would I go with?”

“Not your brother,” I said, referring to our barely verbal toddler in diapers. “He’s too young.”

The first two episodes of Jedi Temple Challenge are currently available to stream for free on the Star Wars Kids YouTube channel. The eight remaining episodes in the first season will be added weekly.