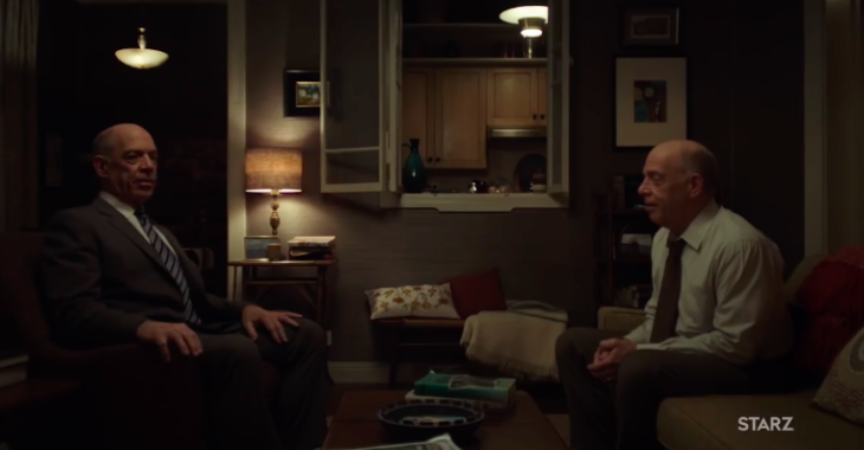 Warning: This post contains references to scenes in the first half of Counterpart S1.

All throughout season one of Starz’ Counterpart , we’ve been captivated as much by the show’s inter-dimensional diplomacy and technological advances as its primary spy conflict. This sci-fi/spy mash-up has succeeded in no small part because of its thorough consideration of each and every detail. JK Simmons portrays two major characters, choosing how real-world Howard subtly reacts with a glance versus Prime-world Howard choosing a glare. And series creator Justin Marks handed staff a 10-page manual before production as if they were all employees of the show’s fictional governmental office needing to learn payroll procedures.

That subtle-yet-crucial level of scrutiny on the show even extends to things most viewers don’t notice, like the very picture in front of their faces. Veteran cinematographer Luc Montpellier loosely describes the role of a cinematographer as a major to the director/creator’s general, but he oversees everything dealing with image capture (having input on things like lighting and camera selection to staging and post-production feedback). For Counterpart , that meant conceptualizing two distinctly different visual palettes—and being comfortable with the necessary tech tricks to pull off the show’s contrasting sci-fi and vintage flourishes.

Montpellier has been in the business long enough that he learned using film as a capture medium, but today he constantly tinkers with cameras across the spectrum—the latest smartphone lens, Canon and Nikon DSLRs, or the highest-end fare from Red or Panavision.

“It’s no different than a doctor reading up on new techniques in surgeries,” he says. “You never know what a production demand will be, and the tech choices you make really, truly affect the final look and the experience the audience has.”

Montpellier points to an old project of his, 2013’s Happy Slapping, as a prime example. He shot the film on a bunch of iPhone 4s because the script boiled down to kids trying to shoot the perfect video in order to make a quick buck. “The actors shot the film pretty much, and that’s a whole other way of thinking. A pro camera wouldn’t work in that situation,” Montpellier says. “So you have to stay up to date—I’m constantly reading, staying up with trade mags, and doing testing if I’m not shooting a project.”

Counterpart gave Montpellier and his collaborator, Martin Ruhe, a new challenge. Beyond the obvious visual conundrum of allowing seamless visual clones to share scenes, the show combined very different overall aesthetics. It’s a European-set spy drama reminiscent of other Cold War fiction or John le Carré works, built upon exterior shots filled with classic architecture and a color palette of grays and dulled tones. But Counterpart is also a multi-dimensional story with flashes of future technology and separate design philosophies between two worlds.

Marks brainstormed with the two cinematographers from the start on nailing this visual dichotomy. For the older-looking ideas, Montpellier said the team went directly to source materials showcasing previous European eras. “In my first talk with Justin, I pulled a couple of films and they happened to be the same ones he was thinking—like The Lives of Others , a film happening in East Germany where the population feels repressed and watched all the time,” the cinematographer said.

Ruhe worked to shoot exteriors on location in Germany, and the cinematographers came up with a unique tech trick to further their desired old-world feeling on certain shots: 1950s lenses applied to digital cameras. Specifically, Montpellier says they used old Angénieux CS2 cinema lenses. “They’re detuned; the sharpness was almost intentionally messed up in a way,” he says. Montpellier noted that kind of pairing is only possible today, now that there are specialists in many major cities that create adapters allowing you to put virtually any lens on any camera. “If you can find the old glass, you can get it on your DSLR no problem.”

Montpellier believes the leaps in modern camera technology have generally ushered in a new age of cinematography and photography, one where an incredible sensitivity to light enabled by innovation has “almost created a new visual language.” As a way to distinguish Counterpart’s bygone era feel from other recent television shot at least partially in Europe (say, a recent season of Homeland was also based in Germany, for example), this partnership between old (lenses) and new (camera) tech became pivotal.

“When you capture an image through older lenses, the light reacts differently. It’s not as razor sharp. And I find that [on] TV today, everything is being shot with the same technology, and so it looks the same on the textural front,” he says. “We didn’t want that. We wanted this kind of grayness—there’s a bit of the Cold War between the two sides, and it’s a bit of a spy thriller, a bit historic—so it could’ve easily been a film that was shot in the ’50s after the war had finished.” And the proof is in the (soft-focus) pudding, as evidenced by a few dramatic scenes (the second episode’s aged opera house, a few moments in an ancient church.)

Contrast this to some of the scenes Montpellier worked on with the show’s “Prime” world, where technology has slightly advanced (see their virtually bezel-less, near translucent smartphones). For the cinematographer, a hospital in episode four comes to mind immediately. Compared to the familiar medical facilities of the real world, the Prime world’s wards look like Jony Ive creations. Everything is starkly white, with brightness coming from various gadgets as the only points of interest cutting through the minimalism.

“It was a real challenge to design that shot—JK [Simmons] ’s character just walks through a hospital and goes into a room—but it was so important to set a mood,” he says. “So it’s a subtle cue, but we created a lot of medical tech that had light emanating from things. There are a lot of practical sources of light in that frame. What do you make glow? What’s too much? It’s almost our world but [with] those little differences you don’t see in our world, so their hospital feels slightly heightened.”

While the doubles/clones thing has been done quite well recently—Orphan Black, Netflix’s What Happened To Monday? —that doesn’t make it any less of a visual and logistical challenge for the crew.

“That was a big learning experience for all of us—how to stage those scenes, which tools do you use?” Montpellier says. “We wanted to create a seamlessly staged scene with two characters walking around each other and having natural conversation.”

Doing that means placing as few restrictions on Simmons as possible so his performance, and not some technical tricks, distinguish the two Howards. Achieving that goal does require plenty of technology in practice, however.

“We ended up using a motion-control camera rig that could repeat shots to the exact frame accuracy,” Montpellier says. “A lot of times, we’d approach these scenes with JK as Howard 1 and a stand-in so he could perform against someone on the other side of the frame. You’d move around the room [and] we’d follow him with the techno-dolly, this huge motion-control rig with a computerized robotic arm that can repeat the shot.

So we’d perform one side of the shot, then JK would go get changed. During that time, we’d edit his audio and put all of that together. When he’d show up a half hour later as the other Howard Silk, we’d repeat the camera move, they’d repeat the blocking, and the stand-in would take the other side. We’d repeat the shots, but it might take numerous takes because the timing might be slightly off. And before we’d leave that setup for the next scene, our VFX team is there recording everything and making rough composites on set so we could see that everything was lining up properly before breaking down. You might end up with 10 crewmembers staring at a lamp in the frame because it’s a double exposure. ‘Oh, is it good, or is it off?’ It was very much a learning experience.”

The show hinges on these sequences being believable to viewers. “I can attest: it doesn’t matter how good something looks, if the performances are bad we’ve all lost,” as Montpellier puts it. Luckily through nine episodes, everything’s felt realistic. Simmons has been as good as we thought based on Counterpart’s early episodes , and a lot of credit for the series’ success thus far rightfully lands on his shoulders.

But this show also looks like nothing else on TV, and its visual decisions have only strengthened the depth of the world being created. “Sometimes you must look to the past to achieve a certain look, and you can’t always use the newest stuff,” Montpellier says. “With Counterpart , we’re very much trying to blend the new and the old.”

Ahead of this Sunday’s S1 finale, at least viewers can rest easy that this visual tightrope walk will continue. After hearing from Montpellier and learning S2 was already confirmed, we all have something to keep an eye out for in 2019.