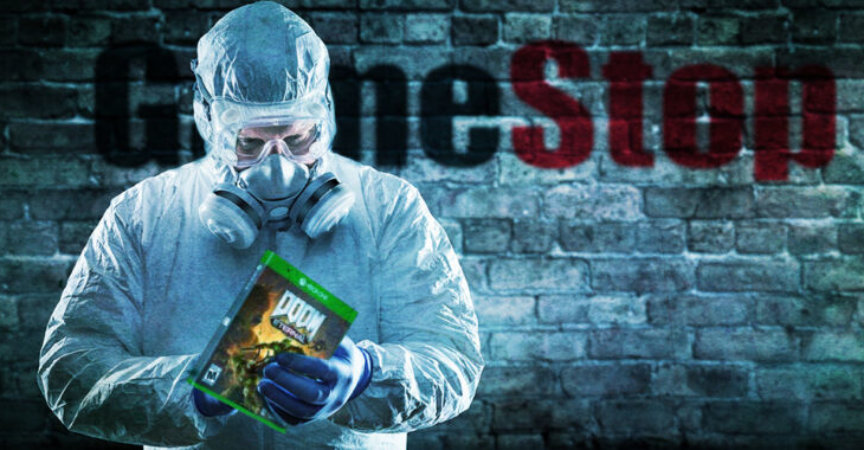 Update (3/20/2020 2:15pm ET): Ars Technica has confirmed that GameStop stores in California have been told by management to close “until further notice.” The news comes as Governor Gavin Newsom issued a statewide “shelter in place” order for all California residents to “stay home except for essential needs .”

Update (3/19/2020 11:16pm ET): GameStop provided a statement to Ars Technica saying that “while GameStop is best known as a provider of gaming and home entertainment systems, we also offer a wide array of products and devices that are important to facilitate remote work, distance learning, and virtual connectivity.” GameStop says it is “one of many providers” that serve the “significant need for technology solutions” that many Americans are now facing as they work and learn from home.

“While there are many businesses and organizations far more critical than ours, we believe we can have a positive impact during this very challenging time,” the statement continues, adding that “we are complying with all state, county, city and local ordinances and we will continue to adjust to any future developments.”

Update (3/19/2020 5:04pm ET): Vice and Kotaku are reporting that multiple GameStop store associates have received a memo from the company’s corporate offices saying that the stores should be considered “essential retail and therefore [are] able to remain open during this time.” According to the memo, this is “due to the products we carry that enable and enhance our customers’ experience in working from home.”

The memo also reportedly provides associates with a note that can be given to law enforcement agents who might try to shut down GameStop retail locations, telling them, in part, “thank you for what you are doing to keep us all safe.” That note also includes a phone number for the “GameStop COVID-19 law enforcement and government support line,” which goes directly to voicemail when dialed.

It should perhaps go without saying that most states and localities that have enacted forced closures for non-essential businesses do not consider video game retailers to be an “essential” exemption. The state of Pennsylvania’s closure guidelines, to cite just one of many examples, explicitly says it considers all “retail facilities, including shopping malls, except for pharmacy or other healthcare facilities within retail operations” to be non-essential and has asked them to voluntarily close for at least two weeks .

GameStop representatives were not immediately available to respond to a request for comment from Ars Technica.

Earlier today, GameStop announced it would be releasing Doom Eternal one day early, to spread out the expected crush of pre-order customers picking up that game and tomorrow’s release of Animal Crossing for the Switch.

Major retailers across the country are feeling the pinch as health officials continue to urge social distancing and many US localities order closings for all non-essential businesses to limit the spread of the novel coronavirus. Already, a wide range of retail chains, from Apple and Macy’s to Nike and Hot Topic , have voluntarily closed all locations for at least a couple of weeks.

GameStop, though, is still open for business in thousands of locations nationwide.

That doesn’t mean it’s business as usual. In a public “message to customers,”  GameStop says it is providing its stores with disinfectant, telling associates to stay home if they have even mild symptoms, and urging potential customers to “follow recommended self-quarantine guidelines if you are experiencing any flu-like symptoms, no matter how mild.”

The company has also canceled planned midnight release events for Animal Crossing and Doom Eternal this week in order to “avoid situations where large numbers of guests are gathered indoors or standing in line.” And GameStop also says it’s implementing social distancing policies inside stores, such as allowing only ten people inside at any one time and creating “line management practices that creates a 1-meter parameter [sic] between customers in checkout lines.”

But the actual situation inside the stores themselves seems less encouraging. Reports from Kotaku, Vice, and Polygon, as well as a lengthy Reddit thread , highlight many anonymous GameStop employees who say they haven’t received promised cleaning supplies from the corporate office. Instead, store employees have been expected to go out and buy sanitizing products from local supplies that are often already picked clean, then send in requests for reimbursement.

“We’re enabled to go out to purchase these items ourselves and have them expensed,” a San Francisco-area store employee told Kotaku. “At least in my store’s regard, it’s virtually impossible to find the items we need to adequately clean and sanitize the stores and keep ourselves as safe as we can.”

Confusion seems rampant in other aspects of store operations. Vice reports that a memo sent to employees ordered them to shut down “interactive gaming stations” where customers can try out new games. But stations that have been paid for by Sony, Nintendo, and Microsoft need to stay active, the memo suggests, asking employees that may have shut them down to restore them and “wipe [them] down regularly with disinfectant wipes.”

Perhaps most concerning, GameStop has apparently not modified its policies toward accepting used games and technology at all, forcing employees to handle materials from customers who may not know they’re infected. One store employee told Polygon that they were instructed “not to turn away trades for any reason.”

“They are demanding standard trades and tech trades so we are handling a lot of unknown goods,” a separate GameStop worker told Polygon. “They said we can use gloves but [the company] cannot provide them so it’s up to us to find them.”

Was this trip really necessary?

To be fair, GameStop’s continued operation is apparently serving an increased market demand for the store’s services. Kotaku reports multiple employees saying there’s more foot traffic at their locations, and Polygon heard from an employee who was told directly to “take advantage of increased traffic.” That’s not too surprising, as more people are looking for additional indoor entertainment while they either work from home or shelter in quarantine amid the virus’s spread.

Still, GameStop is hardly the kind of retailer that needs to stay open during a pandemic. On the contrary, every major console now offers downloadable versions of every retail game in its catalog.

That means, if you’re among the nearly three-quarters of American adults with a broadband connection in their home , there’s no real reason to risk additional viral exposure and spread by going to a store for a physical disc or cartridge. Sure, some might prefer the permanence of physical games or find lengthy downloads inconvenient. But immediate concerns over spreading a global pandemic trump the pros and cons of that particular debate.

Even in broadband-free households, an overwhelming majority have Internet access through a smartphone, meaning they can order physical games from Gamestop.com or other online retailers even if brick-and-mortar locations are closed. Just as ordering food delivery is more responsible than going to eat in a restaurant these days, ordering game delivery is much safer (personally and societally) than going to a GameStop.

Despite all this, GameStop seems laser focused on keeping stores open for the time being, even when the decision goes against local government orders. Polygon confirmed that multiple San Francisco-area GameStops were still open as normal yesterday, despite a region-wide mandate that only “essential businesses” remain open .

Well before the coronavirus outbreak, those increasingly popular alternatives to brick-and-mortar game retail were alreadycausingmassivetroubles for GameStop. Those troubles have gotten so bad for the retailer, in fact, that many investors have recently speculated about impending bankruptcy for the company as a whole.

And in that, I think, we find the real reason for GameStop’s insistence on continued retail operation during a pandemic. “On two different conference calls, we were told we had to ‘think about the longevity of the business’ and that GameStop would have to close stores permanently if we closed for health reasons,” one employee told Vice. “So they’ve basically guilted us into working or we will lose our jobs anyway.”

For sure, there would be some reasons for sadness if a coronavirus-related shutdown led to a more permanent GameStop closure, either for individual locations or the chain as a whole. Not in the least, such a closure would be a major economic burden for the thousands of employees that rely on the retailer for their income.
But there will also be reason for sadness if GameStop employees or customers contribute to the spread of a disease that experts warn could easily overwhelm hospital facilities in coming months. And even without coronavirus closures, GameStop’s eventual fate as the game industry’s version of defunct megachain Tower Records seems relatively clear at this point.

Prolonging GameStop’s inevitable decline doesn’t seem worth the risk of prolonging the human suffering that could come from additional spread of the coronavirus. It’s time GameStop followed the lead of other major retailers and shut down its stores temporarily during this crisis.