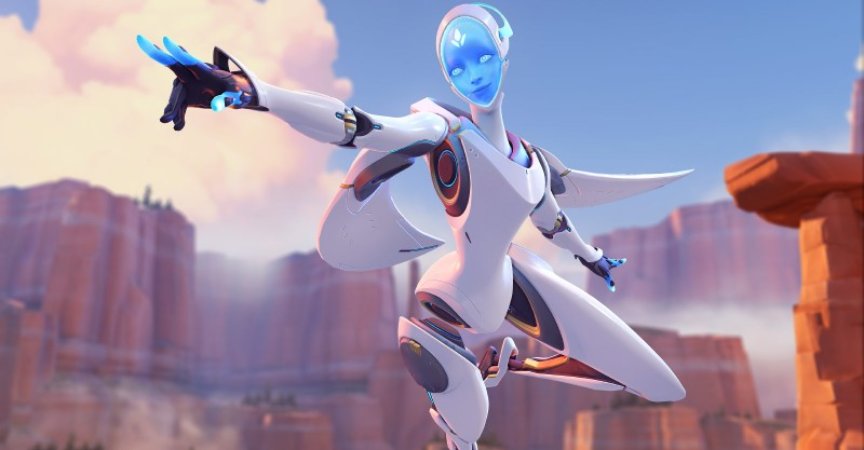 Echo is the newest hero in Overwatch, and she changes things up significantly. Her flight capabilities and sticky bombs can create chaos for the other team when used correctly. To figure out how do best use Echo, I talked to pro player Danteh, who runs DPS for Overwatch League’s Houston Outlaws, and he walked me through the techniques that have helped him. He recently won a community tournament playing Echo the entire time.

What do you think of Echo as a hero? Does she mesh well with the game for a pro player?
Danteh: I think she’s a really fun hero. She has a high skill cap, and anytime a hero is added with good mobility and unique abilities, I think it’s good for the game because it’s moving away from the other heroes that are [crowd control] heavy. Generally, CC isn’t that fun to play against, so I think with the addition of Echo and her high mobility and no CC, she’s fun to play. Her hit box is good for the other team since it’s easy to hit form her wings being counted to it.

Who did you play before Echo?
I play a lot of Tracer and Sombra. That’s what I’m mostly known for in Overwatch League.

For a new Echo player, what should they be focusing on first?
I would say you have to change your style based on the [opposition’s comp] . If their comp has double shield, then you want to try to break the shields for your team. She has really good shield break, and if you can do that, it’ll enable your team so much. When they have hit scan you really have to focus on shield break because you can’t play in the sky as often.

What’s the easiest way to break the shield?
Throw your stickies right away. Fly in the air and hug a corner, throw the stickies at the Reinhardt, and if he doesn’t have his shield up, it will do damage to him, and if he has it up, it’ll hurt his shield. Keep spamming that until he gets close to you guys. If you call “break shield, break shield” his shield should be around half, and you can use your focusing beam to deal 200 damage per second if his shield is below half. It’s really good to do that against him. It’ll break his shield instantly if he keeps it held up. He has to drop it if you use that.

Where are you positioning yourself with your team. You said you are hugging a corner, but are you backline or in front?
To start the fight, I try to be a little ahead of my team. I can get the angles and I can also be in the sky. If they are hit scan pushing me, I can turn around a little bit and use the map structure to stay out of his light of sight and spam stickies before he’s within our team’s LOS. Most maps have a lot of corners and you always want to play near one with Echo because your hit box is really easy to hit. The other team can kill you if they look at you. That’s a style to enable your team against shields. She’s so good against them.

Does that strategy change per match type?
Every map is different and since the hero just came out, I have pretty limited experience with her. Another style you can play with her is a hidden style. Fly to the top of a map and around a corner and wait for the other team to cross and go for one hits. This can be hard sometimes because if you miss with your stickies and you don’t get them under half, the focusing beam doesn’t do much damage. It’s really only good when they are under half. If you get them under half, you basically get a one-hit. If you hit with a decent amount of sticky bombs, you can get them under half and the focusing beam will kill them in under half a second. If you can hide and the enemy doesn’t see you, they will likely move in a predictable manner. You can get easy sticky bombs.

How do you use the Ult?
The Ult is a bit different based on your comp and theirs. I think the best heroes to turn into are Reinhardt, D.Va, Doomfist, Mei, and anyone that has good survivability and gets their Ult really fast. If they focus you as Rein, you can just hold your shield up. If they just stay on you, your team can do a lot. If you are Mei and they focus on you, you can ice block. Doomfist you just have really good mobility so it’s hard for them to focus you. Also, all of these heroes have really good Ults when you get it up.

What’s a good comp to run with Echo?
I personally like playing with Orisa. When you play with her, you can say “Orisa, can you pull a 200 HP squishy hero” and then you try to shoot your stickies at her pull. That combo is easy way to one-hit people. If you are playing with a Zarya, you can ask for bubble and go in for a one-hit. You can combo with any hero, but try to coordinate.

How often are you airborne?
It depends on their comp and map. If they have McCree or any hit scan in general, you have to be very careful because it’s easy to hit Echo given her hit box. When they are McCree I tend to stick behind a shield for safety, except for on maps with geometry like rooftops you can use to hide or sneak around for one-hits against him.

Some people play Echo kind of like Pharah. Can you talk through some similarities and differences in their play styles?
With Echo, you can play in the sky. You have good mobility and can stay in the air most of the time. I think it’s a bit harder to do critical damage from the air because your primary fire has ammo like a shotgun, it’s hard to aim, and isn’t explosive. The only way you can get kills in the air is with stickies. That’s why I think you want to hug the maps geometry as much as you can and play corners so you aren’t seen. You can just poke when they are out in predictable motions. If you play in the open and spam, it’s good for breaking shield, that’s a good strategy – always keep pestering the shield tanks. Hugging corners is the best so they don’t focus you.

Who should you not match Echo with?
On the other team, McCree and Tracer are the two I’ve had the most trouble with. You are safer, on the ground more. Tracer can pester you really hard, which makes you have to take the air, but they can then hit scan you.

What about a teammate. Who shouldn’t she be paired with?
If your team has Lucio and Moira it’s a bit hard to play as her because it forces you to play on the ground if you want heals. If you are in the air, you can’t get heroes and non-hit scan heroes can kill you. Even Hammond can poke at you from afar. That makes it easier for the other team.

Who is your favorite hero in the game so far?
Tracer or Echo.

Least favorite character?
Maybe Brigitte? Maybe not anymore, but when she was first released she was really strong for a year or so. It felt really oppressive to play against. Right now I’m pretty happy with all of the heroes. I don’t think there’s a broken hero. It’s at a balanced state right now.

What would you like to see from an upcoming hero that speaks to your skill set? What’s your dream build?
I think high mobility heroes are always fun. So are flankers. Heroes that have high mobility and aim like McCree have a high skill cap. They are good for the game because as people get better and better they improve with the heroes and it’s really fun to feel the growth for those heroes.