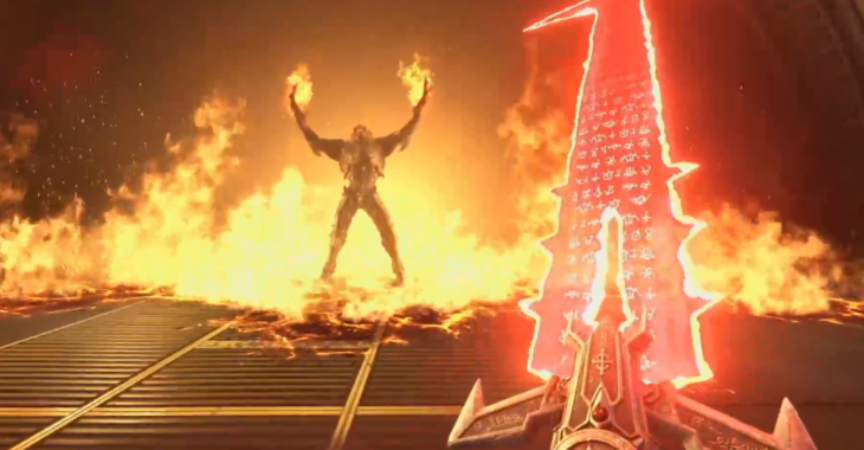 Friday’s QuakeCon keynote included a 15-minute Doom Eternal gameplay premiere, showing off the idTech7 engine in action for the first time. As predicted after its E3 tease, this sequel will follow Doom II ‘s lead from 1994 and bring the new series’ demons and terrors of Hell to Earth.

The gameplay sequence confirms that Doom Eternal will further emphasize movement and explosive weaponry, and the most noticeable change comes from a new super shotgun that doubles as a grappling hook. With this weapon equipped, aim until a small skull icon turns golden in your field of view, at which point you can extend a chain and either zip yourself toward a particular demon or use its body to swing yourself in a circular motion around it.

Doomguy also comes equipped with two new weapons by default: a retractable blade on his left wrist and a shoulder-mounted flamethrower. In practice, the latter looks like a solid option to pester a crowd of foes rushing you at once, while the former just adds more gore and amputation possibilities to the game’s “glory kill” mechanic (in which rushing a foe and pummeling them to death feeds your health bar, but at the cost of potentially getting crowded by other nearby foes).

Should the game’s aggressive AI and huge monster counts not be challenge enough, players will be able to toggle an “invasion” option during the campaign mode. This will allow other online players to team up and invade your game as AI opponents. We only saw a tiny tease of this feature, so we’re still wondering exactly how invading characters’ health and powers will scale, or whether they’ll be low-health monsters that must respawn repeatedly within a campaign. id Software emphasized that this mode would be wholly optional for those who want to “rip and tear by yourself.”

While the game’s reveal included the first-ever mention of an “idTech 7,” thus taking the game’s rendering engine one higher than the idTech 6 seen in Doom 2016 and Wolfenstein 2: The New Colossus, neither id Software nor Bethesda were forthcoming about its details. The presentation included hints about new levels of gore and destruction for each of the game’s demonic foes, complete with concept art showing off how enemies may deform as they take more damage. A Doom Eternal press release offered a brief, non-technical description of what to expect: “With idTech7, every environment is brought to life in unprecedented detail.”

While id Software’s presenters hinted at “lore” and world-building aspirations, it all really just sounds like an excuse to send the Doomslayer to a variety of outposts beyond the demon-wracked cityscape in the reveal’s first bloody encounter. We saw a cloudy, gothic church scene at one point, along with an assault on an outpost on Mars’ moon Phobos. That sequence included better looks at two new standard weapons: the Ballista, a laser launcher whose rounds explode inside of bad guys, and the Heavy Cannon, a combination machine gun and sniper rifle.

Otherwise, this is all rockets, shotguns, air-dashes, grappling swings, and move-and-pummel stuff, complete with a new industrial-sludge soundtrack that already sounds on par with Mick Gordon’s Doom 2016 score. Sadly, id Software didn’t bring a release date to this QuakeCon reveal, but it did confirm the game’s eventual launch platforms: PC, PlayStation 4, Xbox One, and Nintendo Switch. Shortly after that announcement, the developers at Panic Button, who ported Doom 2016 to Switch, posted a series of Reggie Fils-Amine GIFs on Twitter , which seems to indicate that they will once again work their magic to get the high-speed series working on Nintendo’s less powerful hardware.

This article has been updated to clarify what’s currently known about the new idTech 7 rendering engine.