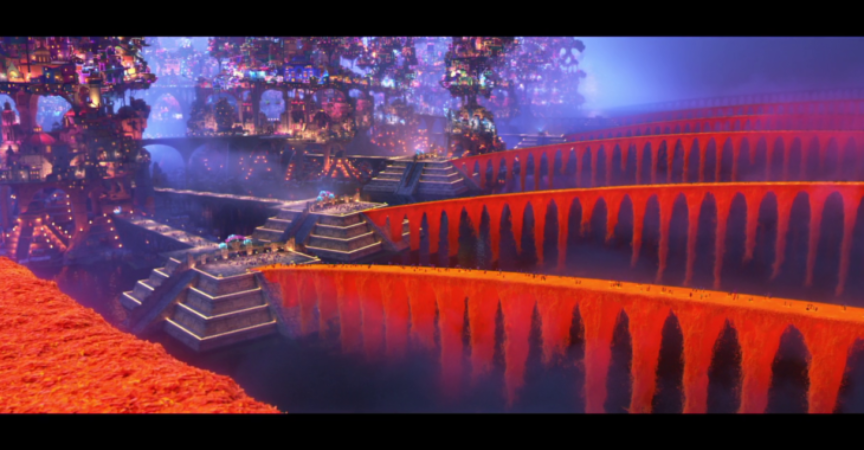 What’s the point of ponying up for a new 4K HDR TV if you don’t have an ultimate “check this out” video to match? Once you research the format, learn about confusing standards , and pick a dreamy new set, it’s hard not to then invite friends to see the fruits of your nerd labor.

The trouble is, so much compatible content is either attached to video games (which aren’t always fun for friends to watch you play) or films that were mastered at sub-4K resolutions. I was happy to see Planet Earth II show up in 2017 on the 4K HDR Blu-ray format , but even that series has its limitations (including some sub-4K content).

Which is why I am pleased to declare that the format has reached a tipping point. Disney-Pixar’s 2017 film Coco launches in stores this week as a 4K HDR Blu-ray, and while it’s not the first CGI-animated film in the format, it’s easily the most impressive thus far. More importantly, it demonstrates exactly what pricey-TV owners can expect when a film is produced with 4K-and-above material across its entire pipeline.

The gap that Coco fills

Most films released on 4K HDR Blu-ray are hamstrung by the limitations of film stock. The Ghostbusters (1984) 4K Blu-ray is a great example. It utilizes the format’s full 3840×2160 pixel count… in order to accurately recreate the blurs and soft spots found in the film’s highest-quality archival reel. I would argue that this is a very cool way to watch this and other classics re-released in 4K Blu-ray format—it really is something else to see the divide between home viewing and projector-reel showings narrowed so much—but it’s as subtle as a 4K boost gets.

Even as more filmmakers add 4K and 8K equipment to their production pipeline, they’re still likely to lean into visual softness, whether to replicate the look of film stock or just because issues like motion blur and depth of field are insurmountable in the real world. They’re trying to draw emotion out of an actor’s performance, not out of revealing their every pore. While most of the recent 4K/HDR Blu-rays I’ve watched look mighty fine in 4K resolution, and better than their 1080p equivalents, some detail is still lost.

Planet Earth II is a notable exception, in part, because some of its best scenes hinge on rigid filming focus. Fur on a lemur, shimmers on an ocean, fine lines over dunes, and intricate insect-leaf patterns: more pixel data on these and other elements makes the difference between a plain ol’ documentary and a Planet Earth one.

With a 3D cartoon, however, the pixel sky is the limit. Yet the 4K HDR examples I’ve seen thus far have fallen short. 2016’s The Lego Movie employs a lot of camera effects and animation hitches to make its CGI Lego characters look like they were filmed on real stop-motion cameras. Disney-Pixar’s only 4K HDR release up to this point, Cars 3, is boring both in content and in pushing the typical Pixar limits. And Despicable Me 3 focuses on simple, primary colors, which means it wastes the light- and color-boosting potential of HDR.

Which leads us to this week’s home version of Coco. Ars’ Annalee Newitz already praised the film for its technical chops in her November review :

Followed by his adorable street dog friend Dante over a bridge made of orange flower petals, Miguel finds himself in a glowing, multi-layered city of gondolas and neon rainbow-furred flying animals. Ghosts who look exactly like Día de Muertos skeletons are everywhere, their bony faces vivid and emotionally expressive. There are a lot of satirical touches, too, like when the dead line up at Disneyland-like gates to get in and out of the Land of the Dead. It’s a sumptuous and funny visual sequence that will fill even a cynic’s heart with wonder.

A quick glance at the film reveals explosions of color, almost like the body of a bioluminescent jellyfish turned into a parallel ghost universe. Indeed, the first moment that I saw the monstrous ghost city, full of floating, sparkling buildings, I gasped—and I knew it was coming, having seen the film in theaters. This is what HDR is all about: packing each pixel with as much light and color information as a filmmaker pleases, in order to nearly replicate the intensity you’d expect in a high-end theater. Coco ‘s otherworldly creatures explode in deep hues of purple, green, and yellow that are impossible to replicate on the older SDR color gamut range—and this 4K HDR Blu-ray version can crank up those creatures’ color details without drowning out or black-crushing nearby content.

But I was particularly surprised, upon this second viewing, by noticing Pixar’s decision to turn off depth-of-field effects in wide shots. Sometimes, the film’s hero Miguel stands in the foreground and marvels at giant expanses of buildings and glowing creatures—and the filmmakers opt to bend the laws of perception and just let every single detail drink in a full 3840×2160 resolution. Not every scene does this, mind you, and Pixar still renders traditional, natural film effects (motion blur, DOF) on a regular basis. But this rendering choice is absolutely enchanting in a home-viewing environment—as if Pixar staffers have had to explain away their 4K sets to friends before.

Additionally, Coco sees Miguel and his skeleton companion Hector sneak around in a number of dimly lit areas, and HDR’s impact really stands out in these scenes. When Hector first steals away to an attic crawl space to practice a guitar, the scene is visually dominated by sun-starved hardwoods. Yet in this version, their variety of brown and black tones all keep their definition and subtleties, even while super-bright slivers of sunlight break through to punctuate the visual space.

Moments later, Miguel is enraptured by a black-and-white television, which he watches in a secret, candlelit room, and this too is breathtaking in its subtlety. The object-based reflections employed by these competing lighting sources reveal stark contrast between the bluer, cathode-ray light from the TV (which sparkles in Miguel’s eyes and off his cheeks) and the warmer candlelights (which glow all over his arms and sides). I’d argue that this is just as intense and memorable to see as the moments in which fireworks explode during a pivotal moment early in the film.

It doesn’t hurt that Coco is a delightful story about family, culture, tradition, and memory. It’s an easy one to rewatch a few times with or without children nearby, and it includes a good variety of TV-bragging fodder, whether you want to fast-forward to color-filled cityscapes or take your time feasting on the subtler, 4K- and HDR-boosted content throughout the entire 104-minute runtime.

Not everyone can so easily copy Pixar’s incredible production values, of course. Still, anyone working on CGI content should rush out to buy a copy of Coco and notice how often it employs unrealistic scene framing and focus in order to fill out a screen’s pixels. This happens just often enough to drop jaws without breaking the film’s softer, more emotionally framed shots. It’s all expertly employed, and I hope filmmakers shamelessly copy this for the sake of future 4K/HDR releases—and that we see more CGI cartoons emphasize the home format’s advantages.

In the meantime, Coco delivers more than any feature-length film yet released on the 4K/HDR Blu-ray format. You’ll get bursts of color, dramatically lit interiors, pixel-rich vistas, delightfully busy foreground scenes, and seemingly endless worlds across the horizon. Your 4K/HDR TV has been waiting for this.