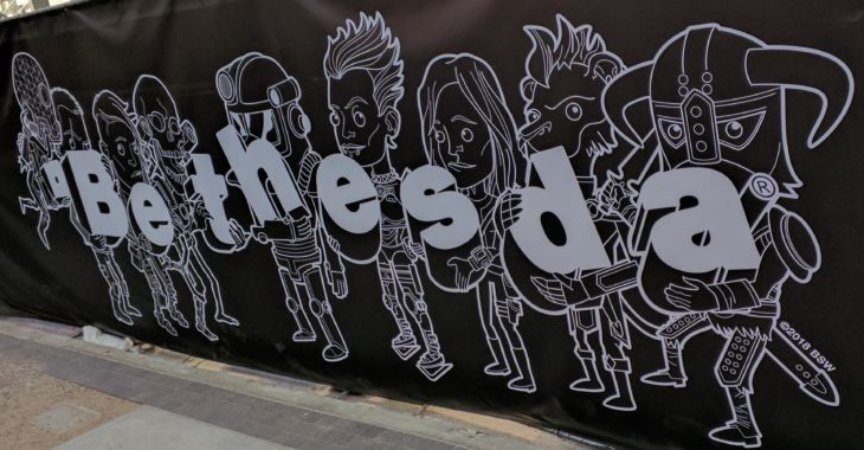 LOS ANGELES—Video game publisher Bethesda hosted a rollicking pre-E3 press conference on Sunday evening with a number of game reveals from existing franchises like Doom, Fallout, The Elder Scrolls, and Rage. But the publisher’s most tantalizing reveals were also its shortest ones: long-rumored game series Starfield. and the first mainline Elder Scrolls entry since 2011.

Bethesda director Todd Howard closed the conference with Bethesda’s two-part tease of future games. The first, Starfield , was described as “a brand-new, next-generation, single-player game. This one is in an all-new epic franchise. Our first wholly original franchise in 25 years.”

Starfield ‘s reveal trailer began with a cinematic look at a planet’s edge in space, followed by a floating satellite in its vicinity that is abruptly ripped through time. No release date was announced. Its description counters the repeated rumor that Starfield might revolve around smartphone play. Instead, Howard’s brief description may point to a wait until successors to the PlayStation 4 and Xbox One reach the market.

Following that quick teaser, Howard decided to slip the crowd one more goodie: “the game after [Starfield], and it’s the one you keep asking about.” What followed was an incredibly short trailer that showed a rolling camera shot over a giant, lush mountain range, and then a logo that got the crowd roaring: Elder Scrolls VI. No subtitle or release window was included. (Howard’s “after Starfield” statement seems to also hint at future consoles as ES6 ‘s target platforms.)

One unexpected spin-off announced at the conference was a new mobile entry in the Elder Scrolls series, but not something slow or menu-driven. Elder Scrolls: Blades is a fully fledged first-person RPG that resembles Skryim, made up of a mix of pre-made and procedurally generated worlds, that will come to PCs, consoles, iOS, Android, and PC VR systems this fall in free-to-play form. Blade ‘s gameplay trailer revealed both tap-to-move and virtual joystick control options, which were shown off in the form of surprisingly smooth movement and combat on an iPhone X. How the game will scale for other devices remains to be seen.

Meanwhile, a cinematic pre-rendered sequence confirmed a previously teased return for the Doom series, complete with an apparent “Hell on Earth” motif. However, rather than take on the original PC game’s name Doom II: Hell on Earth, id Software instead revealed a new name: Doom Eternal . Details such as “twice as many enemies” were teased, but a larger, gameplay-loaded reveal will have to wait until this August’s QuakeCon.

Wolfenstein Youngblood was announced as a new standalone Wolfenstein shooter game with a multiplayer co-op focus. Its brief teaser trailer included no gameplay and a vague release window of 2019. In another no-gameplay tease, Wolfenstein Cyberpilot was announced as a VR exclusive with nothing more than a title announcement, but the new VR shooter will be playable on this year’s E3 show floor. That game is part of Bethesda’s “mission to bring the message of ‘fuck Nazis’ to every platform possible,” Hines added.

Two other Elders Scrolls spin-off series, Elder Scrolls Online and Elder Scrolls Legends, each received teases of new content. In particular, the card game Legends has been announced as coming to Switch, Xbox One, and PlayStation 4 later this year.

And Prey received an announcement of a new content patch going live this evening with “story mode,” “new game plus,” and support for the game’s first paid DLC add-on, which is now officially live and for sale. Mooncrash‘s trailer showed players stepping onto a base on the moon and contending with a variety of the series’ creepy aliens. Later this summer, a new multiplayer combat mode, dubbed Titanhunter, will debut for Prey that will split players between human combatants and the game’s “mimic” creatures.

After a fake advertisement for an Amazon Echo version of Skyrim, starring Keegan-Michael Key, Bethesda’s Todd Howard began telling the crowd about “the next Fallout”—which will launch on November 14 of this year. Fallout ’76 will receive a beta test period before launch, but Bethesda didn’t confirm when or how players will be able to participate.

As Bethesda Software director Todd Howard began describing Fallout ’76, he mentioned the wide breadth of characters in Fallout games of the past. “One big difference with this game: each of those characters is a real person,” Hines said. “Yes, Fallout ’76 is entirely online”—and is powered by Bethesda’s private servers, Howard later confirmed.

“Of course you can play this solo,” Howard told the crowd. “Be who you want, explore the huge world doing quests, experiencing a story, and leveling up. We love those things about our games, too, and would not have it any other way.” Still, Howard’s descriptions hinged largely on the benefits of teaming up—or taking out online foes. (He at least assured anybody worried about MMO aspirations that game instances would be limited to “dozens” of fellow players, not hundreds. “It’s the apocalypse, not an amusement park,” Howard said.)

A trailer for the game’s online content showed a combination of PvE and PvP combat, though it didn’t confirm whether or not players will be able to opt out of the PVP portion. One highlight included an oversized, fist-pounding sloth taking on four friends simultaneously. Additionally, Howard confirmed that settlements can be built and shared with online players. This time, they’re known as C.A.M.P.s, though brief peeks at menus suggested, without confirming, that these will work in similar fashion to Fallout 4 ‘s settlements.

Howard hinted to the game’s full world hiding “multiple missile sites.” Rushes to get hands on these missiles looked like they might make up the game’s higher-difficulty online co-op challenges—meaning, Fallout’s version of raids, though perhaps only with a four-player co-op maximum. Bombs that are acquired and launched by co-op groups will land somewhere on the actual map—and possibly impact other players—to clear a path for your co-op team to dig through the nuked wreckage, fight harder monsters, and acquire more loot.

A live-gameplay trailer began with a nicely furnished, art-deco furnished apartment, along with first-person view of players equipping a Pip-Boy device. Players walk into an empty vault where an apparent American Tencentenary party had happened with other vault dwellers had had fun and left. Following this came more footage of the game’s foliage-filled West Virginia environs, along with the Fallout series’ most animated and grotesque monsters yet.

Earlier in the day, Fallout ’76 received a smaller reveal at Microsoft’s afternoon press conference. At the time, it mostly confirmed an aesthetic quite similar to Fallout 4 —which at least assuaged those who’d theorized a “lighter” take on the Fallout universe—along with claims of a game “four times” the size of the series’ last full entry.

“God turned his back on humanity long ago,” the game’s hero, Walker, said as narrator of the trailer. The rest of the video looked straight out of a middle schooler’s most demented sketchbook, if staged on the deserts of Mad Max: Fury Road and the sci-fi hallucination scenes of Annihilation. Armless robo-zombies shot rockets; particle grenades made enemies float before turning them into an explosion of gibs; every shootout had conveniently placed gas tanks, which exploded with impressive volumetric smoke and fire effects; and the trailer ended with a Sloth -like humanoid beast wielding a giant hammer while wearing a broken football helmet that his head appeared to burst through.

The trailer revealed superpowers like an airborne ground-pound and a force-push attack, and vehicular combat was emphasized with an admittedly welcome slogan: “if you can see it, you can drive it.” The trailer’s car-chase scene saw Walker take down a number of four-wheelers by shooting his giant ride’s car-mounted rockets and knocking foes off the road (with one enemy crash showing its top-mounted driver crushed by its own car). Some semblance of plot was hinted at, as a remote voice commanded Walker to call a rocket to land on the earth for the sake of an unclear mission. But, you know, this was mostly about fast, familiar first-person blasting.

Rage 2‘s mid-May gameplay teaser confirmed development duties were largely handed to the open-world game designers at Avalanche—and that the game combined technicolor-punk aesthetics with the first Rage game’s love of Mad Max. (Avalanche, for the uninitiated, is known for both the Just Cause and Mad Max game series.) “We’ve admired the open-world chaos in all of Avalanche Studios’ games,” id Software studio director Tim Willits told the E3 conference crowd. Whether Willitts appreciates Avalanche’s reputation for uneven frame rate performance on consoles , however, is another matter—and the “real pre-alpha gameplay” video had its fair share of stutters and sloppy anti-aliasing.

Tech News – The 7 Best Turntables for Your Vinyl Collection (2020)

Bringing you the latest news from across the tech world. Now go ahead and read what you were looking for, but remember keep checking our news section for more of the latest technology news to keep you up to date and in the know. The 7 Best Turntables for Your Vinyl Collection (2020) The best […]