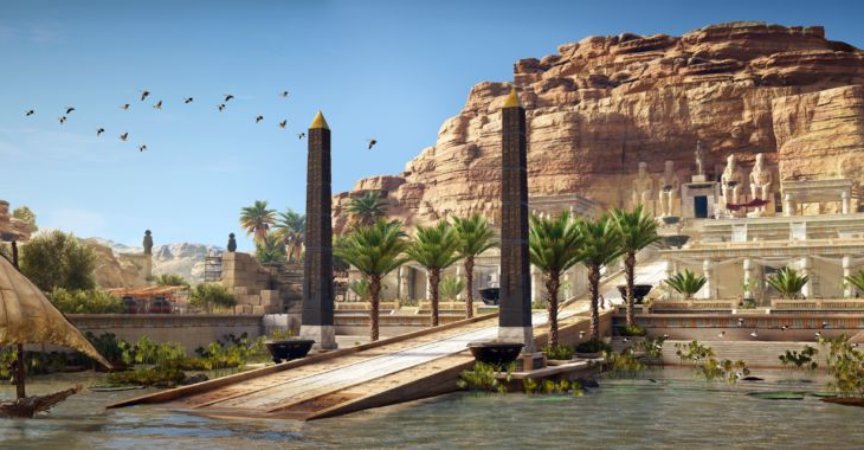 Glistening sands and teaming life stretch far away. I stand at the head of a gilded Pyramid, looking away to the bustling lives and vibrant oases around me. Dust curls up along the horizon, eager to embrace a nearby village. Hippos lumber around the beaches, warding off wary intruders with their girth. This is ancient Egypt not as we imagine it—a popularized image of endlessly mythologized figures—but closer to Egypt as it really might have been. It’s lush and vibrant, harsh and unforgiving; a land of scoped mystery, steeped in blood.

Ubisoft has plenty of experience replicating realistic (or at least realistic-esque) worlds like these throughout the Assassin’s Creed series. The mega-developer’s latest tentpole, Assassin’s Creed: Origins , continues the tradition. The attention to detail is exceptional, and here that’s no mere quip about superficial beauty. Like a digital museum, great care has been spent curating the fineries and looks and culture of its disparate corners. Indeed, Ubisoft has already announced a “Discovery Mode” update, coming next year, that literally turns the game into a digital museum, allowing visitors to rifle through relics and records, pyramids and obelisks to learn about the mores and traditions of the people who lived there.

For now, though, Origins is more of a known quantity, a rough assemblage of the cornucopia of ideas that have settled into the popular consciousness of what games need to be (side missions, gathering, crafting, stealth sections, and so forth). As such, Origins has a sort of crushing variety, for better and worse.

As in the many preceding Assassin’s Creed games, you assume the role of a skilled assassin. This time you’re Bayek, who lived two millennia ago as the last of the medjay—an ancient paramilitary order whose real-world counterpart all but vanished after 1000 BCE. He’s charismatic and brutal, a rough-hewn product of his torturous life. Packed with rage and desperate for revenge—as these heroes always are—you follow Bayek as he treks across Northern Africa hunting a string of targets.

Trope-laden as the set-up may be, Bayek is far more charismatic and rounded than many previous series protagonists. Origins weights his quest with many believable instances of injustice, such as greedy landlords abusing their power. Even so, playing Bayek isn’t about a never-ending rage-fueled bloodbath, either. He quips, share drinks with friends, and makes nice with children. It creates the unsettling air that he’s always bubbling, just beneath the surface, ready to explode and unleash a caged beast.

That rage becomes an important and enduring theme throughout the game. Bayek’s anger is righteous, yes, but it’s also clearly hard-to-control and self-destructive. Even that bare level of nuance is surprising and refreshing in a major release like this.

Much of the adventure centers on tracking your targets and navigating the political tumult of the era. This is Classical Egypt in its waning years, thousands of years from the time of the pyramids’ construction, and long after the glory of the Egyptian Empire hit its peak. Naturally, Bayek finds himself at the fulcrum of history, adjusting the balance of power in the region—often unintentionally—in ways that leave their mark for millennia to come.

There’s a charming, popcorny grandeur to it all that dovetails well with the game’s extensive playground. Watching camels plod about with the golden peak of Giza in the backdrop, or seeing the rolling waves that reach for the horizon, carrying whole fleets of triremes is like something out of a book, evoking an impossible era that seems mystical only because of its distance from the modern.

The grandeur of the ancient world

Alien-obsessed conspiracy theorists notwithstanding, the game helps lead to a genuine realization that people—real human beings—built some of these gargantuan structures and, moreover, that such landmarks were well-integrated facets of ancient life. This alone is a revelation that comes in waves and curdles as a lasting marvel at our long-dead progenitors.

What really hampers this adventure is how often the game trips over itself, hamstrung by the endless string of tasks you’re given. This is still an open-world game, and while great care has been taken to make much of its “content” engaging, it’s also got sterling ideas stretched far too thin.

As but one example, like in Horizon: Zero Dawn before it, you’ll spend a fair bit of time hunting for materials—be they leather or bone. You can then refine them into more useful tools or clothing for protection. The whole system is clever enough. Bayek can send a trained eagle to scout and mark fruitful hunting spots. This gives you a top-down view of the area, an objective, and a motivation to get there (gathering so that you can produce better equipment). That sounds like it’s all you need—means, motive, opportunity—but all of the goals are extrinsic and don’t align with the thirst for exploration that such lush riversides and mysterious deserts invite. Instead, you’re led to grind for more and more, without cause or motivation.

Much of Assassin’s Creed: Origins can feel mindless, then, as if you’re merely checking boxes and moving on—a problem the series has perennially struggled with. Some of those checkboxes, like traversing the land and immersing yourself in a nearly-breathing recreation of the Ancient, are phenomenal. They’re only made more so when you get the opportunity to rub shoulders with important real-world figures like Cleopatra. Others, like clearing out enemy bases, are just the opposite.

To its credit, however, Origins dramatically overhauls the Assassin’s Creed formula, making even the dull bits far more entertaining than in some of its prior iterations. The series’ signature parkour has evolved into an even more freeflowing and natural exercise than ever. These worlds feel seamless and far less game-y as a result. The impression is one of infinite possibilities, just waiting to be unearthed as opposed to being a guided tour that highlights a chosen path.

Combat, too, has picked up a major rework. Your fights—both with your assassination targets and the guards as you’re making your escape—have been honed to be more tactical endeavors. Positioning and focus matter. Bouts are largely duels, with you squaring off against only a couple of foes, often in succession. It’s ordered without feeling rigid, and some spectacular animation work lends itself to fluid, almost artful dances with blades and knives.

Still, there’s a persistent clash between what the game wants you to do and what’s actually entertaining to do in its well-crafted world. Then there’s another major flaw here: bugs. The game is gorgeous, yes, but too often the pace crawls as standard consoles struggle to keep up with the demanding environments. (We didn’t get the chance to play on PC, so we can’t account for performance there. Nor can we vouch for the PS4 Pro or Xbox One X versions.)

Despite this, Origins is a triumph, of sorts. The feeling of perusing the ancient world in this fidelity is special on its own, and one of the best examples yet for a game’s visual beauty alone being a stunning, inspirational experience. But, far too often that gives ground to more traditionally game-y bits that dilute Origins’ best moments.

Verdict: A shining example of what exploration-based games can be, dropping many of its franchise’s worst traits even while being sometimes held back by the mundane. Buy it.